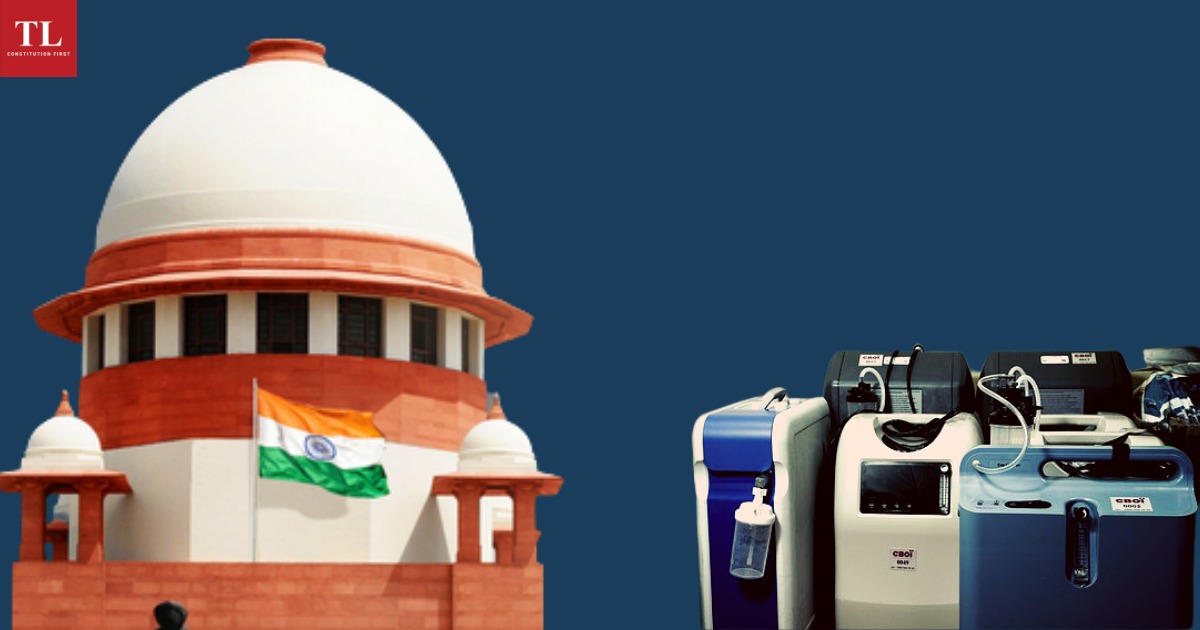 A bench of Justices DY Chandrachud and MR Shah after hearing the Attorney General for India passed the order.

The bench noted that the appeal by the Central government raised the arguable question. It also recorded the submission of the AG KK Venugopal that a decision was taken to constitute a Group of Ministers to scrutinize the need for “further relief to Covid-19 related individual items immediately”.

The AG contended that the high court’s order entrenched upon a pure issue of policy and that the exemption which had been granted in respect of the concentrators which were imported by the state or its agencies fell in a clearly distinct classification.

Here's the SC order staying the Delhi HC's order holding IGST on oxygen concentrators imported for personal use as unconstitutional.

In a significant ruling on May 21, a division bench of Justice Rajiv Shakdhar and Justice Talwant Singh of the Delhi High Court had declared the IGST on oxygen concentrators imported for personal use as violative of Article 14 and 21.

Presently, the IGST leviable on import of oxygen generators is @ 12 percent till June 30 after the Centre issued a notification on May 1 reducing IGST from 28% to 12% on its import for personal use, while those importing it for commercial purposes were levied @ 12 per cent of its price.

On May 3, the Central government had issued a notification exempting the IGST levy on oxygen generators that were coming in “for charity” but being imported in by states and state-authorized agencies.

The plea before the high court had demanded that this exemption also be extended to individuals importing oxygen concentrators for personal use and to those who had been gifted the same for personal use.

Accepting the contention of the petitioner, the high court said there was no justification whatsoever in excluding individuals from the purview of the notification dated 03.05.2021 only on the ground that they had received the oxygen concentrators directly as gifts from their friends or relatives located outside the country.

The court found this distinction manifestly arbitrary, unreasonable, unfair and wholly unsustainable and thus violative of Article 14 of the Constitution.

“Persons who are similarly circumstanced as the petitioner, i.e., those who obtain imported oxygen concentrators as gifts, for personal use, cannot also be equated with those who import oxygen concentrators for commercial use. Therefore, the notification bearing no. 30/2021-Customs, dated 01.05.2021, will also have to be quashed”, the high court said.

It added it is trite to state that if one aspires for a civilized society, then those who are obligated by law should pay their taxes. Likewise, the State should relent, or at least lessen the burden of exactions which take the form of taxes, duties, rates and cess, in the very least, in times of war, famine, floods, epidemics and pandemics since such an approach allows a person to live a life of dignity which is a facet of Article 21 of the Constitution.

In addition, the High Court said during a calamity the Courts and the State have to adopt a humanistic approach, which is a facet of Article 21 of the Constitution.

The petitioner had contended that the right to life encompassed several second-generation rights including the right to health, which were compromised because of actions of the Central government.

HC had ruled on a plea by filed by an 85-year old COVID-19 patient whose nephew had sent him an oxygen concentrator as a gift from the US.