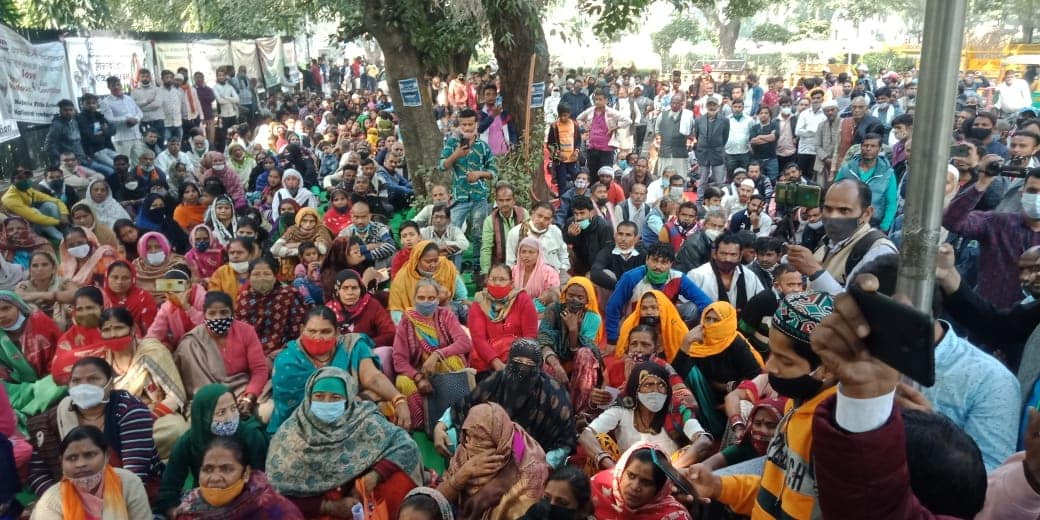 Saga of forced evictions in the name of development: plight of street vendors in Delhi

Delhi’s street vendors are dealing with an eviction crisis. The solution lies in including them in the imagination of urban planning, write SHALAKA CHAUHAN and ARAVIND UNNI.

IN the second week of this month, Purushottam, locally known as Prashant, a street vendor in central Delhi’s Connaught place area, died by suicide. It later came to the fore that the reason behind this was a financial crisis borne by his inability to pay his debts.

Since November 8 last year, around 150 street vendors in Connaught Place, including Purushottam, lost their livelihoods due to forced eviction by municipal authorities. Not just that, it was due to a complex combination of pressure from the Market Traders Associations and the bureaucracy, insensitive court orders, and corrupt planning standards that street vending, the largest economy for self-employed workers in the city, was disallowed in Connaught place. This has further been replicated in other markets of Delhi like Lajpat Nagar, Sarojini Nagar and Chandni Chowk market, and is now being scaled up in cities across India, thereby setting a dangerous precedent of undermining progressive legislation for the upliftment of working groups like the street vendors. All this is happening at a time when only the first step of the enactment of the Street Vendors (Protection of Livelihood and Regulation of Street Vending) Act, 2014 – the survey and issuance of Certificates of vending [CoVs] and licenses – is being taken.

Also read: Street vendors have a fundamental right to vend, but with restrictions, says Delhi HC

What the Act guarantees

In 2014, the union government enacted the Street Vendors (Protection of Livelihood and Regulation of Street Vending) Act based on Article 21 of the Constitution of India – the right to life with dignity. As the title suggests, the Act is designed to ‘protect’ and ‘regulate’ street vending in urban areas. Street vending until then was a primarily ungoverned territory, wherein ‘regulation’ meant the ‘removal’ of vendors, who are considered as ‘illegal’ and simply unfit to be in the cities.

The Delhi High Court questioned the basis of the Street Vendors Act, and stated that “the country will go to dogs if this act is implemented in its entirety. What will happen if street vendors start sitting on your doorsteps?” It has also been stated by the same bench that the Act is heavily tilted towards street vendors and that there are no experts in the TVC.

The Street Vendors Act, enacted on May 5, 2014, attempted to change that mindset – firstly, it recognized vendors as an integral part of Indian cities and granted legal recognition to them. They were guaranteed to be surveyed and till then, not evicted; secondly, the Act allowed for a framework of governance that is participatory and decentralized, primarily led by the Town Vending Committee [TVC] located in urban local bodies [ULBs]. The TVC was to be based on representative democracy by having elected vendor representatives; thirdly, it allowed street vendors to be included as part of the city planning process. It gave a population norm of 2.5 per cent of the city population as engaged in street vending. Lastly, various inclusionary measures for the legal support and promotion of street vendors through vendors’ welfare, training and capacity building were laid out.

The Act is a nuanced, well-designed legislation that has come through numerous years of contributions from social movements led by street vendors associations, and incremental progressive court directives, starting from the judgment in Olga Tellis vs. Bombay Municipal Corporation in 1985,  to the landmark order of the Supreme Court in Maharashtra Ekta Hawkers Union vs. Municipal Corporation, Greater Mumbai in 2013.

On November 17 last year, upon hearing petitions by Market Traders Associations on street vendors’ rights as delineated in the Street Vendors Act 2014, the Delhi High Court, while listening to their grievances, passed unfavourable comments on the legal rights of street vendors in Delhi. The division bench of Justices Vipin Sanghi and Jasmeet Singh further questioned the basis of the Street Vendors Act, and stated that “the country will go to dogs if this act is implemented in its entirety. What will happen if street vendors start sitting on your doorsteps?” It has also been stated by the same bench that the Act is heavily tilted towards street vendors, and that there are no experts in the TVC. It should be noted that street vendors represent only 40 per cent in the TVC, whereas NGOs, Resident Welfare Associations, community based organisations and market traders association are independent bodies that constitute the rest of the membership, and are nominated by the government itself. Street vendors are the only ‘experts’ who can present the concerns and challenges faced by them on the ground in the city.

The societal apathy and disdain towards vendors come from a colonial mindset, in which vendors are viewed as smugglers and encroachers occupying public spaces, and are a threat to pedestrians’ right to way.

Moreover, based on the earlier drawn vending zones, and the Master Plan of Delhi [MPD] 2021, multiple recent High Court orders have led to the unlawful eviction of street vendors in the areas of Connaught Place, Sarojini Nagar, Lajpat Nagar, Chandni Chowk, and other well-established street vendor markets of Delhi.

As per the Street Vendors Act, and the rules and scheme made thereunder by the Delhi government, Delhi has 27 TVCs across the city’s three Municipal Corporations, the New Delhi Municipal Council [NDMC], and the cantonment. Even after many deliberations in the TVC meetings, and with vendor representatives pushing for an inclusive and comprehensive survey and registration of vendors, there is a bureaucratic lethargy and rigidness in allowing vendors their rights. The democratic agency of the TVCs has been systematically and solely controlled by the chairpersons, who are usually IAS officers.

It is also important to note from the minutes of the TVC meetings that members representing government authorities like Health, Police, and Planning departments, do not attend the TVC meetings, hence missing the opportunity to make these meetings enriching and participatory.

If we talk about city planning, it is the right of TVCs to decide on vending zones. Unfortunately, this right has been curtailed under the present MPD 2001-2021, as the plan has not been amended according to the provisions of the Street Vendors Act. The latest draft of MPD 2041 also carried forward the same legacy, by deliberately excluding any mention of the 2.5 per cent norm, TVCs, and the participatory process for vending zone demarcation.

It is not a matter of coincidence that the NDMC ‘smart city’ plans, like many other smart city plans, have demarcated central park and surrounding areas as ‘hawker-free’ zones. Apart from the bureaucratic and city planning hurdle, the societal apathy and disdain towards vendors come from a colonial mindset, in which vendors are viewed as smugglers and encroachers occupying public spaces, and are a threat to pedestrians’ right to way.

The last couple of years, with the COVID pandemic, have been extremely difficult for street vendors and the informal economy. Vendors’ incomes have fallen by over 40 per cent in Delhi and many are reported to have gotten into debt traps. This is despite timely and proactive measures taken by the union government through the Union Ministry of Housing and Urban Affairs’ Prime Minister Street Vendor’s AtmaNirbhar Nidhi scheme, and the Delhi government reaching out with PDS [Public Distribution System] and non-PDS relief. But how can this go a long way in addressing the crisis when they are not legally permitted to vend because the city would not allow them to? This is why we need concrete and collective efforts in addressing this problem.

The first step is to focus on mainstreaming the urban development schemes with street vending as a core component, be it the Delhi Master plan, the Smart Cities Mission, the Swachh Bharat Abhiyan, and other urban-centric policies. The schemes must explicitly mention the need to synchronize actions with the Street Vendors Act’s objectives. There is a need for a massive focus on training and capacity building of ULBs, TVCs, and vendors in playing a decisive role in the execution of the Act that includes the identification and demarcation of vending zones.

We must also acknowledge the lack of inclusion of street vending and informal livelihood practices in the Master Plan process and imagination. The upcoming MPD 2041 needs to mention the norm of 2.5 per cent of Delhi population as street vendors, and recognise the TVC as a responsible agency for the preparation of vending planning in Delhi. Furthermore, there is a need to have inclusionary mechanisms for natural markets, weekly markets, women markets, and the many heritage markets in MPD 41.

We must also acknowledge the lack of inclusion of street vending and informal livelihood practices in the Master Plan process and imagination. … Unless urban planning is decolonized as a practice and pedagogy, cities will continue to see exclusionary development in continuous contestation with informality.

It is clear that unless urban planning is decolonized as a practice and pedagogy, cities will continue to see exclusionary development in continuous contestation with informality. This could be seen as an opportunity to use critical reflective urban planning practices to rescript and decolonize our imagination of Delhi by prioritising the welfare of the urban poor and enhancing their livelihoods.

(Shalaka Chauhan and Aravind Unni are associated with the National Hawkers Federation. Both of them are part of social movements based on urban planning, and the Right to labour and housing. The views expressed are personal.)h