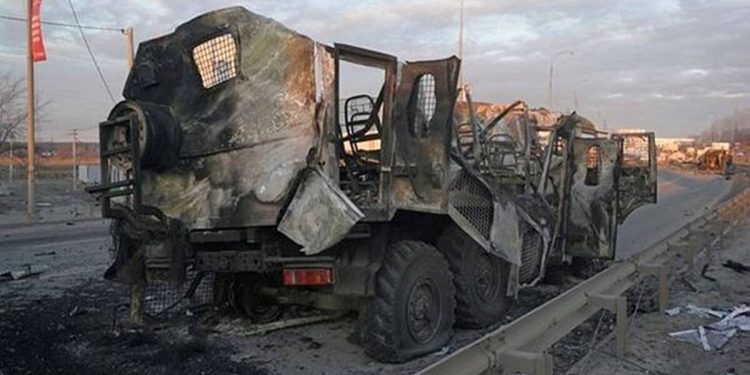 The current Russia – Ukraine crisis has raised certain intrinsic questions as to the existence and efficacy of International Laws and Organizations, writes SARA SURESH.

VLADIMIR Putin, the Russian Federation President, in his imperialistic speech delivered on February 24, declared a special military operation in order to protect people who had been abused by Genocide for eight years under the Kyiv regime, strive to demilitarize and de-Nazify Ukraine, and bring those to justice who had committed crimes against the civilians of Russian Federation. Paradoxically, Putin has cited international law to defend his blatant illegal actions. But these justifications are laughably weak, erroneous and absurd. The present crisis has posed a question as to the existence and enforcement of international law if Russia can still use military force and invade Ukraine.

The formation of the United Nations [UN] was supposed to create a new order of International relations, placing its bedrock on the sovereignty and integrity of nations. The member countries of the UN are duty bound to not interfere with one another’s domestic and internal affairs, as apart from violating the UN Charter, it leads to circumstances which threaten the peace and security of a nation.

Recognition of regions in Eastern Ukraine

Before invading Ukraine, Russia recognised two separatist Ukrainian provinces – Donetsk and Luhansk – as independent states, followed by signing treaties of friendship, cooperation and mutual assistance, thereby paving way for Russian military forces into these separatist areas openly. While acting so, Russia has invoked the controversial doctrine of remedial secession. But nevertheless, international law does not recognise unilateral secession even in the right of self-determination due to regard for autonomy within the State.

The claims of genocide of ethnic Russians by Ukraine are not supported by any proof of evidence. Moreover, under the Minsk accords, Ukraine explicitly acceded to recognise the autonomy of Donetsk and Luhansk, which clearly undercuts the baseless claims of Russia.

The following principle in the Declaration on Principles of International Law Concerning Friendly Relations and Co-operation Among States in Accordance with the Charter of the United Nation gives rise to the foundation of remedial secession:

“Nothing in the foregoing paragraphs [concerning the right of self-determination] shall be construed as authorizing or encouraging any action which would dismember or impair, totally or in part, the territorial integrity or political unity of sovereign and independent States conducting themselves in compliance with the principle of equal rights and self-determination of peoples as described above and thus possessed of a government representing the whole people belonging to the territory without distinction as to race, creed or colour.”

This principle allows secession in cases where a government was not truly inclusive, and offers the right of internal self-determination to its citizens.

The Supreme Court of Canada, in one of its notable judgments, the Quebec secession case of 1998, affirmed that the international law does not endure right to unilateral secession and further states that such secession can be asserted only in the ‘most extreme cases’ which denotes a very big threshold, such as severe injustice and oppression, and grave violations of human rights.

The claims of genocide of ethnic Russians by Ukraine are not supported by any proof of evidence. Moreover, under the Minsk accords, Ukraine explicitly acceded to recognise the autonomy of Donetsk and Luhansk, which clearly undercuts the baseless claims of Russia. By recognising the two regions of Eastern Ukraine, the latter has clearly infringed the Declaration on Principles of International Law and Article 2(4) of the UN Charter by interfering and undermining the territorial integrity of Ukraine.

Russia’s armed attack and missile strikes in the land of Ukraine represents a callous exhibition of use if force as proscribed under article 2(4) of the UN Charter. Grotesquely, Russia has defended that its actions would be construed as ‘self-defence’ pursuant to Article 51 of the UN Charter. Yet, it is a known certainty that Ukraine did not open any armed attack on Russia and there was no imminent threat from Ukraine, which would rationalise Russia’s actions. Even if Russia’s claims were found legitimate, unleashing countrywide actions and disproportionate attacks on Ukraine under the theory of self-defence is not permissible.

Russia has defended that its actions would be construed as ‘self-defence’ pursuant to Article 51 of the UN Charter. Yet, it is a known certainty that Ukraine did not open any armed attack on Russia and there was no imminent threat from Ukraine, which would rationalise Russia’s actions. Even if Russia’s claims were found legitimate, unleashing countrywide actions and disproportionate attacks on Ukraine under the theory of self-defence is not permissible.

Also, Russia has endorsed its actions to the disputed principle of Responsibility to Protect (R2P), and further asserted that it is the responsibility of Russia to protect Ukraine against the alleged baseless claims of genocide in Ukraine. Any actions under R2P do not need to be mandatorily sanctioned by UN Security Council [UNSC]. For instance, in 1992, US intervention in Somalia was authorised whilst the North Atlantic Treaty Organization [NATO]’s bombing of Bosnian Serbs was not. Earlier, Putin was highly skeptical of the concept of R2P, which validates humanitarian intervention, especially in the case of the bombing of Yugoslavia by NATO; ironically, at present, he is relying on the same concept to justify the current Ukrainian invasion, and Crimea’s annexation in 2014.

Available courses of action for UN

On February 27, the UNSC invoked General Assembly resolution 377A (V) to convene an emergency special session of the UN General Assembly on the crisis of Ukraine. It is the prime responsibility of the UNSC to maintain international peace and security as stipulated under Article 24 of the UN Charter, which is inclusive of all the collective measures to prevent peace threats and for suppressing the acts of aggression. But the UNSC cannot decide on any coercive methods since Russia is one of the five permanent members of the Council. With regard to the use of force, the General Assembly cannot replace the UNSC, but it can advocate that member States shall come to the aid and assistance of the victim State.

The General Assembly also possesses an option to constitute a criminal tribunal on its approval, based on the agreement between the Secretary General and the concerned State under Chapter II of the Law on the Establishment of the Extraordinary Chambers, and for the establishment of an “International, Impartial and Independent Mechanism” to aid in the investigation and prosecution of people who had committed the most serious crimes under international law, such as the resolution adopted by the UN Human Rights Council in case of the Syrian Arab Republic.

Furthermore, without pointing to any previous illegal actions, the Secretary General can offer his good offices, and can serve as a neutral entity and try to moderate between Russia and Ukraine. But such a step would warrant a change in the political scenario.

With regard to the position of suspending Russia or stripping of its permanent membership from the UNSC as stipulated under Article 5 and 6 of the UN Charter respectively, it would require the recommendation of the same from the Council, which would again be subjected to veto, therefore making it an unfeasible option. Even amendments as specified under Article 108 of the UN Charter would mandate all the permanent members of the Council to agree.

Moreover, Rule 20 of the Security Council’s provisional rules of procedure states that if the President of the Council deems that there would be a conflict to preside over any issue, the president shall leave the chair to the next in line to preside over that issue. Anew, such a decision would be on the sole discretion of the President and is not subjected to the supervision of the Council, unless an order is made to force the president to leave the chair. Even if the president is made to resign, they would still possess an opportunity to vote as a member which constitutes a procedural defect.

Also read: Sanctions on Russia: how will they play out?

The present gruesome actions of Russia are commensurate to constitute the commission of Crime of Aggression, which includes use of force against the sovereign, territorial integrity or political independence of another State, as elucidated under Article 8bis(2) of the Rome Statute of the International Criminal Court [ICC].

The prosecutor of the ICC has asserted that there are reasonable bases to believe that both crimes against humanity and war crimes under Article 7 and 8 of the Rome Statute have been committed in Ukraine, and has decided to launch an investigation into the same. Additionally, Ukraine has moved to the International Court of Justice on the issues of allegation of genocide, and the Court has decided to hold a public hearing on March 7 and 8.

Ideally, the aggressor State and its leaders should be held accountable for its act of aggression against Ukraine, and face international individual criminal responsibility under Article 25 of the Rome Statute. However, the ICC would not be able to exercise such action due to its narrow jurisdiction as both Russia and Ukraine are not party to the Rome Statute (Though Ukraine has accepted the jurisdiction of ICC over alleged crimes in its territory since November 2013).

Russia has always followed a statist approach towards international law principles which holds that a State’s sovereignty and distinctiveness forms the basis of an international rule. Russia views Ukraine as a country of limited sovereignty, or worse, an illegitimate country which is rightfully and culturally Russia’s.

Expounding international law with a focus on humanitarian objectives at the expense of territorial integrity has debilitated the international legal front as a whole. For instance, Russia has always invoked legal justifications and relied on its rights to self-determination to justify its interventions and attacks.

Historically, Russia has always reflected a hierarchy where its own national interests supersede those of its neighbour’s. The antecedent actions of Russia such as invading Georgia in 2008, annexing Crimea in 2014, and recognising the independence of Abkhazia and South Ossetia in 2008, stand as a testimony to this fact. Expounding international law with a focus on humanitarian objectives at the expense of territorial integrity has debilitated the international legal front as a whole. For instance, Russia has always invoked legal justifications and relied on its rights to self-determination to justify its interventions and attacks.

The current situation poses an imminent crisis which merits an international response at due time; otherwise, it would act as precedent for such similar future actions by Russia or any other country. There is a dire need for a clear eyed, focused international law which is committed to strong principles of sovereignty, constrains arbitrary State actions and promotes international peace and security. Otherwise, the existence of an effective international law and order shall continue to remain a pipe dream.