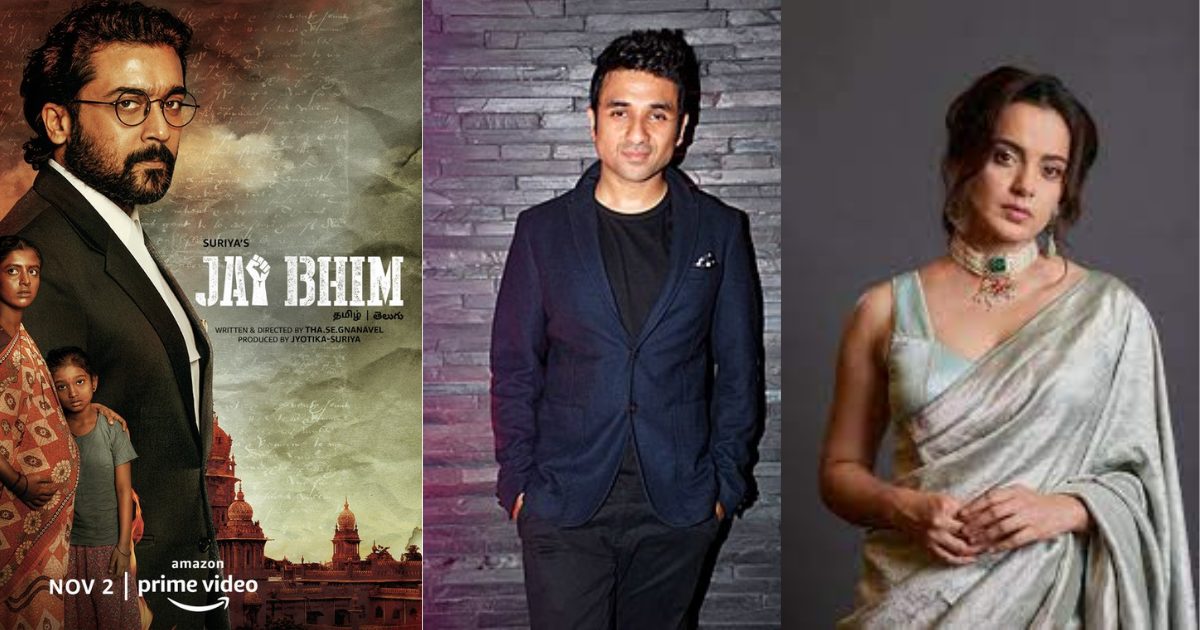 Right to offend and hurt: Distinguishing between objectionability and illegality | Part II

The last few days have seen a spate of complaints being filed, both before the police and judicial magistrates, against allegedly objectionable statements made by comedian Vir Das and actress Kangana Ranaut, and the depiction of a character in the Tamil film ‘Jai Bhim’. But what is objectionable is not a criminal offence in the absence of criminal intent, write VINEET BHALLA and SHREYAM SHARMA.

IN part I of this article, we discussed whether Vir Das, Kangana Ranaut, and the creators of Jai Bhim committed the offense of sedition by exercising their right to speech and expression. In this part, we discuss whether offences against public tranquility, offences relating to religion, defamation, or criminal intimidation, insult or annoyance were intentionally committed, to make the case that there is a dire need to distinguish between objectionability and criminal behaviour in an already burdened justice system.

Offences against public tranquility (Sections 153, 153A and 153B of IPC)
Sections 153 and 153A have been invoked in the complaint against ‘Jai  Bhim’. The Mumbai-based advocate’s complaint against Das, by referring to the possibility of provocation of violence and disturbance of law and order, seems to invoke section 153 as well. Meanwhile, Ranaut’s Instagram post could be interpreted to fit within Section 153B (Imputations, assertions prejudicial to national integration).

The primary ingredient of section 153 is “malignantly, or wantonly … doing anything which is illegal, giv[ing] provocation to any person intending or knowing it to be likely that such provocation will cause the offence of rioting to be committed”. Not only has no rioting been committed as a consequence of any of the statements, but it is difficult to imagine how a sharp satirical comment about the good and bad aspects of India, or the incidental depiction of an evil character in a film as being part of a certain community, especially when they are not addressed to any specific person, is likely to cause provocation that would give rise to rioting. Therefore, section 153 will certainly not be applicable to the above cases.

Next, the portion of Section 153A relevant to these complaints states:
(1) Whoever—
(a) by words, either spoken or written, or by signs or by visible representations or otherwise, promotes or attempts to promote, on grounds of religion, race, place of birth, residence, language, caste or community or any other ground whatsoever, disharmony or feelings of enmity, hatred or ill-will between different religious, racial, language or regional groups or castes or communities, or

(b) commits any act which is prejudicial to the maintenance of harmony between different religious, racial, language or regional groups or castes or communities, and which disturbs or is likely to disturb the public tranquillity,
… shall be punished with imprisonment which may extend to three years, or with fine, or with both. [emphasis supplied]

They may have generated significant debate and heated discussions, but could those be equated with ill-will or enmity? Certainly not.

With regard to the operation of this provision, it was held by the Supreme Court in its judgment in Bilal Ahmed Kaloo vs. State of Andhra Pradesh (1997) that mens rea is a necessary ingredient for this offence.

Additionally, the Allahabad High Court had held in Azizul Haq Kausar Naqwi vs. State of Uttar Pradesh (1980) that if words, spoken or written, are couched in temperate, dignified and mild language and do not have the tendency to insult feelings or deeper religious convictions of any section of the society, section 153A is not attracted.

Also read: Revisiting the Free Speech Debates in the First Amendment to the Indian Constitution
In the case of Das, Ranaut and ‘Jai  Bhim’, even if it is admitted that they do portray a particular community in a poor light, their speech cannot be constructed as disturbing the harmony or creating disharmony among different social groups. They may have generated significant debate and heated discussions, but could those be equated with ill-will or enmity? Certainly not.
Since there is no manifest mens rea evident in any of the incidents to create disharmony (Das is performing stand-up comedy and expressing what he likes and dislikes about India, Ranaut is sharing her opinion in both instances, and ‘Jai Bhim’ is trying to portray a story of a lawyer fighting for justice) or insult feelings, section 153A does not apply to any of the cases referred either.

Next, under section 153B, the offender must have by words, either spoken or written, or by signs or visible representations or otherwise:

Ranaut, in her Instagram post, does refer to a group of persons as arm-twisting the government, and refers to Indira Gandhi’s action against that group of persons when she was Prime Minister, seemingly implying that they be killed. However, the group she is referring to is that of Khalistani terrorists, a separatist group.

Now, separatist groups, by their very nature, don’t bear allegiance to the Constitution and more importantly, don’t form a religious, racial, linguistic or regional group or caste or community (although some of them may draw their membership largely from a particular social group). Ranaut has written about “Khalistani terrorists” as is, without referring to their religious, social, linguistic, regional, caste or community identity.

Therefore, section 153B is not applicable either.

Offences relating to Religion (Section 295A and 298)

The FIR against Ranaut is under section 295A (deliberate and malicious acts, intended to outrage religious feelings of any class by insulting its religion or religious beliefs). Additionally, while none of the complaints against Das specify any religious element, some of the responses to his monologue on social media accuse him of insulting Hindus.

The Supreme Court has clarified that Section 295A penalizes only those insults to religion that are “perpetrated with the deliberate and malicious intention of outraging the religious feelings of that class”, and such insults that are made “unwittingly” or without malice do not fall within its scope.

In Ramji Lal Modi vs. State of Uttar Pradesh (1957), while upholding the constitutionality of section 295A, the Supreme Court had clarified that it penalizes only those insults to religion that are “perpetrated with the deliberate and malicious intention of outraging the religious feelings of that class”, and such insults that are made “unwittingly” or without malice do not fall within its scope.

Now, both Ranaut and Das don’t specifically refer to any religious groups in their respective forms of expression under the scanner. Therefore, it would be difficult to argue that they deliberately and maliciously set out to outrage the religion of Sikhism and Hinduism, respectively.

As held by the apex court in Ramji Lal Modi, unwitting insults don’t come within the scope of this provision.

Would Section 298 (Uttering words, etc., with deliberate intent to wound religious feelings) apply to either of the cases, since that too deals with the offending of religious sentiment through speech?

The offence of defamation only pertains to specific persons. It doesn’t apply to groups of persons or communities.

Additionally, in Sheikh Amjad vs. King-Emperor (1942), the Patna High Court categorically laid down that there cannot be a conviction under section 298 without a definite finding towards the effect of a deliberate intention to wound religious feelings.
Can it be definitively concluded that Das and Ranaut deliberately intended to wound religious feelings? As discussed earlier, it cannot be. Therefore, section 298 won’t apply to them either.

All three accused in reference here have been accused of defamation: Das, of defaming India; Ranaut, of defaming freedom fighters, and ‘Jai Bhim’, of defaming the Vaniyar community.

Now, section 499, which defines defamation, expressly states that the offence pertains to specific persons. From the bare language of the section, as well as the illustrations used therein, it is clear that it doesn’t apply to groups of persons or communities.

Since the complaints against Das, Ranaut and ‘Jai Bhim’ don’t pertain to the defamation of a specific person, sections 499 and 500 will automatically not apply to them.

Both sections 503 and 504, too, are offences committed against a specific person. Therefore, they too can be dismissed from being considered applicable to the impugned cases.

The relevant portion of Section 505, which deals with statements conducive to cause public mischief, is reproduced below:
(1) Whoever makes, publishes or circulates any statement, rumour or report,
…
(b) with intent to cause, or which is likely to cause, fear or alarm to the public, or to any section of the public whereby any person may be induced to commit an offence against the State or against the public tranquility; or
(c) with intent to incite, or which is likely to incite, any class or community of persons to commit any offence against any other class or community,
shall be punished with imprisonment which may extend to three years, or with fine, or with both.
…
Exception. – It does not amount to an offence, within the meaning of this section, when the person making, publishing or circulating any such statement, rumour or report, has reasonable grounds for believing that such statement, rumour or report is true and makes, publishes or circulates it in good faith and without any such intent as aforesaid.

Also read: Why is free speech different from hate speech?

Again, both sub-section (1)(b) and (c), and the Exception clause, underscore the necessity of intention or mens rea. The latter also protects those who may make the statement believing its accuracy, on reasonable grounds.

Additionally, the Supreme Court clarified in Kedar Nath Singh that criticism of the government, however strongly worded or abusively made, does not fall within the ambit of section 505 if there is no intention to incite disorder or violence.

As has been discussed for other provisions too, the absence of specific mens rea makes it difficult to appreciate the applicability of this section.

There is a material difference between speech and expression that is annoying, unlikeable, distasteful, even offensive, and speech that constitutes offences under the IPC. The failure to spot this distinction perhaps separates the reasonable person from an unreasonable one.

Not only did Das not refer in his monologue to any specific woman, but there is no visible intent to insult the modesty of women in it. This offence, too, wouldn’t hold water.

One of the complaints against Ranaut accused her of insulting the national flag and the Constitution of India. However, Ranaut did not refer to either the flag or the Constitution in her entire interview, and therefore doesn’t fulfil the ingredients of Section 2 (Insults to Indian National Flag and Constitution of India) of the Prevention of Insults to National Honour Act, 1971.
Needless to say, the expression of mere opinions, no matter how disagreeable, does not merit charges under the stringent UAPA, that punishes terrorist activities (as demanded by a complaint against Ranaut), nor merit the death penalty (as demanded by a complaint against Das), given in only the rarest of circumstances.

There is a material difference between speech and expression that is annoying, unlikeable, distasteful, even offensive, and speech that constitutes offences under the IPC. The latter usually (but not always) consists of criminal intent, which must be reasonably made out. Its absence separates the objectionable from the criminal, and the failure to spot this distinction perhaps separates the reasonable person from an unreasonable one.

In light of the fact that police and judicial systems are overburdened and under-staffed, citizens, no matter how self-righteous or publicly motivated, should exercise caution before shooting complaints to the police or judicial magistrates against any speech that they may not agree with.

(Vineet Bhalla is a Delhi-based lawyer, and Assistant Editor at The Leaflet. Shreyam Sharma is a second year B.A., LL.B. (Hons.) student at the NALSAR University, Hyderabad. The views expressed are personal.)