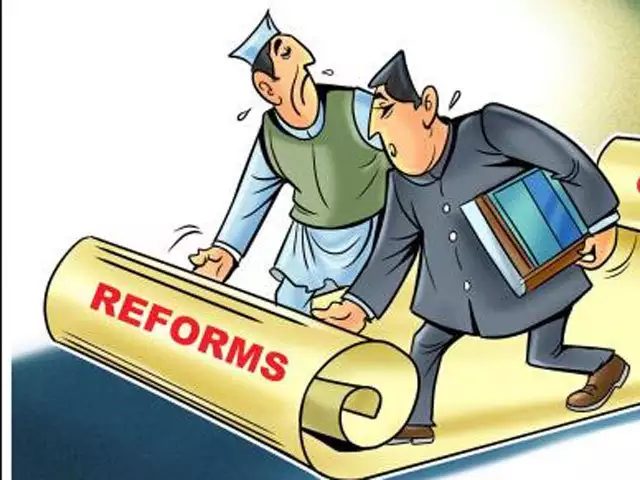 The state, with its ingrained authoritarianism, must be kept at bay to preserve freedom and a market economy is a necessary bulwark. Yet, the fresh thinking on markets that we need will not come from the government, writes PARSA VENKATESHWAR RAO JR.

IT is four decades since Margaret Thatcher and Ronald Reagan raised the flag against the “nanny state” and welfarism underpinning it. They were reacting to the run-down legacy of Franklin D Roosevelt’s New Deal in America in the 1930s and William Beveridge’s report which formed the basis of the welfare state in Britain after the Second World War.

In the face of the Great Depression that followed the Great Crash of October 1929, and the mass unemployed that it created, Franklin Delano Roosevelt tackled the problem by creating government regulatory framework like Works Progress Administration (WPA) and Civilian Conservation Corps (CCC) to provide aid and work to the unemployed.  public projects like Tenneesse Valley Authority (TVA) for generating electricity. He had also taken measures to regulate agriculture through Agricultural Adjustment Administration (AAA) to help farmers with crop prices and to counter the untrammeled market speculation through the Federal Deposit Insurance Corporation (FDIC) and the Securities and Exchange Commission (SEC).

The India-born Beveridge, his father was a civil servant, had been working at his reforms to help people at large through things like to counter laissez faire’s let the devil take the hindmost philosophy by looking for answers to unemployment and how the problem is to be solved right from 1903 when was appointed to Toynbee Hall, a unique institution created by a vicar and his teacher-social activist wife in 1884 to train future leaders by sending them to poverty-stricken East End of London. In true pragmatic British fashion, Beveridge when asked to prepare a social policy document for post-war Britain wrote the Social Insurance and Allies Services, where he worked a way imposing a universal flat rate which hen would be used to provide aid in sickness, unemployment, pension, child care. It did not envisage dole but state help to be made available through weekly insurance premiums to be paid by the citizens.

Free-markets have had their share of crises in the last 40 years and managed to recoup because the evils that caused those crises were nailed. What we need now is a critique of the market economy in India for the last 30 years.

But what was an enlightened policy in the 1930s of America and 1940s Britain did develop economic sclerosis which gave rise to Reaganism and Thatcherism.

The roll-back of the state in the 1980s coincided with another idea that was reverberating loudly across liberal democracies, that the state has no business to be in business. Mikhail Gorbachev’s glasnost and perestroika had sought to resuscitate a crumbling Soviet State in the latter half of the 1980s, but it did not help, and the Soviet Union collapsed in 1991.

When Thatcher and Reagan faded out in the 1990s, their legacy remained. Bill Clinton had declared that “welfarism as we knew it” is no more, and Blair had acknowledged that Thatcher was right.

Yet, when Prime Minister Narendra Modi lashed out against the state-run economy in the Lok Sabha on February 10, he sounded jaded and therefore unconvincing. After seven years in power, Modi’s irritation with a bureaucratic state seemed to be an expression of failure and despair more than a clarion call for revolution.

In 1988, Rajiv Gandhi told the Congress session held in Kamaraj Nagar in Chennai that the “socialist pattern of society” that his grandfather had proclaimed in the 1955 session held in Avadi, another part of Chennai, was relevant no more, and one had to move on.

The problem in India is that the government wants to incubate entrepreneurs and incubate the big players. It does not work. India’s approach to privatising the public sector suffers from feeble thinking as well.

Rajiv cited China and Russia and said that even the socialist countries were changing. He pointed to the return-on-investment figures of the Indian public sector and how unviable they were. The revolt against the state in the economy was worldwide. India under Rajiv Gandhi was sharing the global intellectual ambience of the time, as did Jawaharlal Nehru in the 1950s join the environment in favour of a planned economy.

One reason behind the merging of the public sector banks which would facilitate the emergence of “big banks” is the thinking that India needs big corporations to compete in the global markets. The idea goes back to 2002 when the Monopolies and Restricted Trade Practices (MRTP) Commission of the 1970s vintage was replaced by the Competition Commission of India in 2002 and the then law minister Arun Jaitley explained the need to enable Indian companies to grown big enough to stand up and be counted in the global market arena. China was always cited as an example that had a couple of huge banks. Of course, this was all before the “too big to fail” scare of 2008!

The flaw here is that allowing big players to emerge is not a case of big thinking. What is needed is a breakthrough in ideas and in technologies that will throw up the big players as a natural consequence. The Chinese government did not allow Jack Ma’s Alibaba to become a big player. It happened. The problem in India is that the government wants to incubate entrepreneurs and incubate the big players. It does not work.

India’s approach to privatising the public sector suffers from feeble thinking as well. We have before us two models, one of Boris Yeltsin allowing the state-run units to be grabbed by one and all, and who in turn did not fail to turn them around into profit-making enterprises. Russia lived up to the adage of selling the family silver. The other is the Chinese model where the public sector units were run like private enterprises and turned into profitable ventures.

The assets of the PSUs in India are so high that they can be leveraged and monetised. In 1991, the plan was to sell PSU shares to the public to make them owners. When private sector players buy the PSUs, they may not turn them around but sell-off in turn. For private sector players, it is but natural to sell off a loss-making unit. It would have been justified if the private sector was building assets of its own to replace those of the PSUs. It is not happening. So, the government requires a more innovative plan.

Governments cannot be expected to think clearly and critically about the markets. The stakes are high because a free-market economy is needed to defend the freedom of individuals. That is why we need fresh ideas on how to handle the inherent vagaries of the market.

When Detroit’s auto majors closed shop, the factories were made into museums instead of torn down. In Mumbai, after the textile mills were closed in the 1980s, the complexes were turned into malls. Some of the old film studios like Mehboob Studio became places for art exhibitions. The private sector must continue to build new assets to keep the economic engine running.

Free-markets have had their share of crises in the last 40 years, and they have managed to recoup because the evils that caused those crises were nailed. And so, it became possible to move forward. What we need now is a critique of the market economy in India for the last 30 years. That is the only way to handle the inherent vagaries of the market.

Governments, including Modi’s, cannot be expected to think clearly and critically about the markets. The stakes are high because a free-market economy is needed to defend the freedom of individuals. The state, with its ingrained authoritarianism, must be kept at bay to preserve freedom, and the market economy is a necessary bulwark.

(Parsa Venkateshwar Rao Jr is a senior journalist and political commentator. He is the author of several books on Indian politics. The views expressed are personal.)