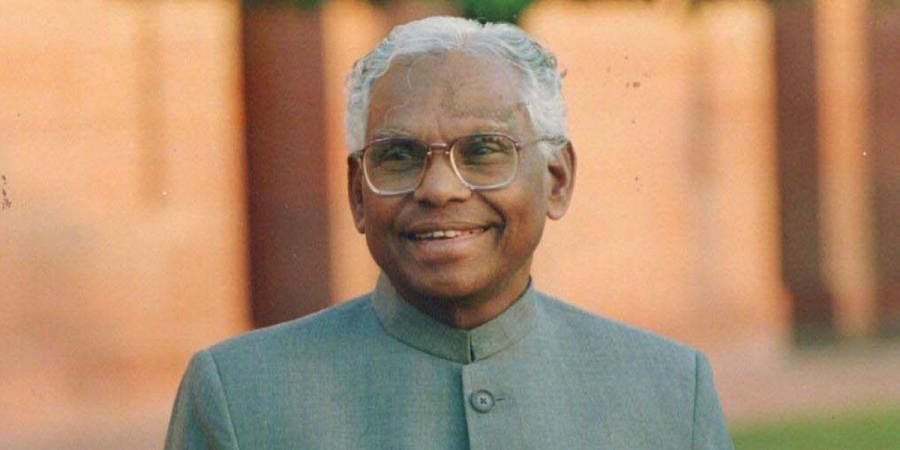 On former President K.R. Narayanan’s 16th death anniversary, S.N. SAHU pays tribute to his upholding and expounding of the tenets of the Constitution during his tenure as President, and his refusal to be reduced to a rubber-stamp President.

FORMER President of India, K.R. Narayanan passed away on November 9, 2005,  three years after he demitted office on July 25, 2002. On the solemn occasion of the 16th anniversary of his demise, his rich legacy in defending the Constitution, constitutional morality and secularism assumes enormous significance at a time when the powers that be and their allied formations beyond the electoral domain have put at stake the Constitution and the very idea of India.

Stalling review of the Constitution

Those words reverberated across the nation and were given preeminent space in the media. Pronouncements were made in different quarters of India that the wise words of the President Narayanan should be paid heed to by the Vajpayee Government, and it should desist from reviewing the Constitution.
His wise and profound articulations, anchored in his oath to “preserve, protect and defend the Constitution and the law” had the desired effect. The Vajpayee Government, instead of appointing a Commission to review the Constitution, set up a Commission to review the working of the Constitution, headed by Justice M.N.R. Venkatachaliah.
The historic role played by President Narayanan in saving the Constitution from a calculated attempt to review it constitutes a landmark in the arduous struggle to defend the Republic and the idea of India which has now been continuously assailed since 2014.
Also read: Independent India’s Constitution is at threat from bigotry
‘Working President’
What was done by President Narayanan actually flowed from his conception of the role of the President of India, which he articulated while interacting with eminent journalist, N. Ram in 1998. Describing himself as a working President, he said “… my image of a President is of a working President, not an executive President, but a working President, and working within the four corners of the Constitution.”
While stating that the President had “… very little direct power or influence to interfere in matters or affect the course of events …”, he maintained that “… there is a subtle influence of the office of the President on the executive and the other arms of the government and on the public as a whole”. That influence, he said “… has to be used with … a philosophy of indirect approach”. He did acknowledge that on a few critical occasions, the President could interfere directly but largely the incumbent could act by following the “philosophy of indirect approach” only if it is in tune with standards of the public and their expectations.
In fact, the remarkable success of President Narayanan in defending the Constitution owed a lot to his uncanny ability to remain tuned to the public mood or opinion. It was indeed extraordinary that he could sense the public pulse and made pronouncements which resonated across the country. That was why his words “whether it is the Constitution that has failed us or whether it is we who have failed the Constitution” stirred minds across the nation, and huge momentum was generated in defence of the Constitution.
Also read: Straying from Constitutional values: India’s democracy is at a crossroads

Socio-economic soul of the Constitution

It is instructive to note that he went beyond the formal legal approach to understand the Constitution, at the core of which he saw social and economic entitlements for citizens. To this effect, he, in his speech delivered on the occasion of the golden jubilee of the Republic, famously quoted the American expert on the Indian Constitution Granville Austin, who wrote in his book ‘Indian Constitution: The Cornerstone of a Nation’ that “[t]he majority of India’s constitutional provisions are either directly arrived at furthering the aim of social revolution or attempt to foster this revolution by establishing conditions necessary for its achievement.”
It is this constitutional vision of a social revolution based on liberty, equality and fraternity and the concept of justice – social, economic and political – which prompted him to flag the shortcomings in neo-liberal policies that resulted in deepening inequalities of income and opportunities. In his Republic eve speech in 2000, he lamented the fact that “[f]ifty years into our life in the Republic we find that justice – social, economic and political – remains an unrealized dream for millions of our fellow citizens”, and poignantly noted:

“The unabashed, vulgar indulgence in conspicuous consumption by the nouveau-riche has left the underclass seething in frustration. One half of our society guzzles aerated beverages while the other has to make do with palmfuls of muddied water. Our three-way fast lane of liberalization, privatisation and globalisation must provide safe pedestrian crossings for the unempowered India also, so that it too can move towards ‘equality of status and opportunity’. “

He then added, “‘Beware of the fury of the patient man,’ says the old adage. One could say, ‘Beware of the fury of the patient and long-suffering people.’“
India now occupies the unenviable position of 101st rank among 116 countries in the Global Hunger Index, and is bracketed among 31 countries where hunger has been classified as serious. The above mentioned articulations of President Narayanan in the context of the constitutional vision of furthering social revolution assumes greater significance to address the growing discontent in society arising out of the reckless economic policies followed by the State.
Also read: India’s Abysmal Global Hunger Index rank violates right to life under Article 21

In the recent past, Union Defence Minister Rajnath Singh made an outrageously false claim that V.D. Savarkar, while serving a prison sentence in the Cellular Jail of Andaman, submitted mercy petitions to British authorities because Mahatma Gandhi requested him to do so.
The Bharatiya Janta Party unit of Maharashtra, in its manifesto for the 2019 Vidhan Sabha elections, promised that it would confer the Bharat Ratna, among others, to Savarkar if elected to form the government in the state.
It is worthwhile to mention that it was President Narayanan who blocked the Bharat Ratna for Savarkar in 2001. As President of India, he proposed the Bharat Ratna for Shehnai maestro Bismillah Khan to Prime Minister Vajpayee in 2000. While agreeing to it, Vajpayee proposed that Savarkar should also be conferred with the same honour.
The matter remained with President Narayanan for his approval. He sat over it, and after a few months when Narayanan went to Prime Minister Vajpayee to greet him on his birthday, he told President Narayanan that he was withdrawing his proposal for the Bharat Ratna for Savrakar as the President was not willing to accord his approval. That was how Savarakar’s name was taken off the list, and eventually only Bismillah Khan was conferred with the Bharat Ratna.
What prompted President Narayanan to adopt that quiet and tactful approach to sit on the proposal was his commitment to constitutional values. It can be better understood if we recall the observations of Dr B.R. Ambedkar on Savarkar. He wrote, in his book ‘Pakistan or the Partition of India’:
“Strange as it may appear, Mr. Savarkar and Mr. Jinnah instead of being opposed to each other on the one nation versus two nations issue are in complete agreement about it.” He then added: “Mr. Savarkar in advocating his scheme is really creating a most dangerous situation for the safety and security of India.”
Today the safety and security of India is in danger because of the polarisation politics which the followers of Savarkar derive from his idea of nationalism. It mandates that all those who consider India both as their birth place and holy land should be accorded preference over those who consider it only their home land and not their holy land. Ambedkar, therefore, said that such a scheme would create the most dangerous situation for the safety and security of India.
Also read: Savarkar: the original divider-in-chief of India
While President Narayanan blocked the Bharat Ratna for Savarkar, his successor President A.P.J. Abdul Kalam unveiled a portrait of Savarkar right in front of the portrait of Mahatma Gandhi in the Central Hall of Parliament, ignoring the observations of Sardar Vallabhbhai Patel, who wrote that a fanatical wing of Hindu Mahasabha, led by Savarkar, was responsible for conspiring to kill Gandhi.

In 2002, communal violence gripped Gujarat because no firm measures were taken by the then Chief Minister of the state Narendra Modi. Muslims were killed in large numbers, and some Hindus also lost their lives. President Narayanan described it as “the crisis of our State and society.”
Because of his interventions, the army was deployed in the riot affected areas. While he met the victims of Gujarat riots, Prime Minister Vajpayee refused to do so.
He used to say that common people imbued with secular values would eventually save India from communal forces. It is hoped that his words would bear fruit and secularism, the basic structure of the Constitution, would be defended on the basis of the strength of common people.
Also read: As long as the basic structure of liberty, equality, dignity and secularism is untouched, the constitution will survive: Indira Jaising

For President Narayanan, Constitution was sacrosanct

To salvage the idea of India we need greater adherence to the Constitutional vision of India. That was why President Narayanan, in his speech delivered on the occasion of the golden jubilee of our Republic, thoughtfully observed:
“Whatever we may do, and we have a right to bring about necessary changes in the political and economic system, we should ensure that the basic philosophy behind the Constitution and fundamental socio-economic soul of the Constitution remain sacrosanct. We should not throw out the baby with the bathwater and like the tragic character Othello in Shakespeare have to lament later, ‘Like the base Indian, threw a pearl away – richer than all his tribe.’ “
The best tribute to President Narayanan would be to uphold the Constitution and its social and economic contents so that our Republic, while marching forward, would remain secure, and its secular aspects, which form the basic structure of the Constitution, are safeguarded.
(S.N. Sahu was Officer on Special Duty and Press Secretary to President of India KR Narayanan. The views expressed are personal.)