Recruiting more judges is the only solution to judicial pendency, an empirical study finds

In its report, the Centre for Economic and Social Progress, a non-profit research centre based in Delhi, expresses judicial efficiency and pendency in the Supreme Court, high courts and subordinate courts, through various regression techniques.

THE number of matters pending is currently the burning issue at the forefront of every judge’s mind, be it at the Supreme Court, High Court or lower court level. Effective working of the judiciary, after all, is vital to ensure its legitimacy in the eyes of the general public and retain people’s confidence in it.  In this regard, India ranks 69th in the Rule of Law Index among 126 countries, performing especially disappointingly in the areas of civil justice, order, and security.

To study this, the Centre for Economic and Social Progress undertook an empirical study, titled “Analysing Judicial Efficiency of Indian Courts”. The study covers the Supreme Court, 24 high courts and the subordinate courts falling under their jurisdiction. The analysis is based on data from the Supreme Court’s annual reports from 2015-16 to 2018-19.

Through a regression model, the study explores specific aspects affecting judicial efficiency: the judge to population ratio, net state domestic product (NSDP, a measure of socio-economic conditions of a state) and procedural delays such as the large number of undertrial prisoners in criminal cases and the time taken to present evidence and constant adjournments in civil cases.

Judicial efficiency is analysed in terms of the institution of cases, their disposal, and pendency in the Supreme Court. To analyse the pendency in the Supreme Court, the study first estimates the least squares trend for the entire period from 1951 to 2018, and also for two sub- periods, 1950-93 (44 observations) and 1994-2018 (25 observations). The method of least squares is a widely used method of fitting a curve for given data, since it provides the best fit for time-series data analysis and minimises the sum of the residuals of points from the plotted curve.

Also read: Judicial diversity in India: exploring the ‘unwritten’ criteria of gender, religion, caste and regionality in appointments to the Supreme Court 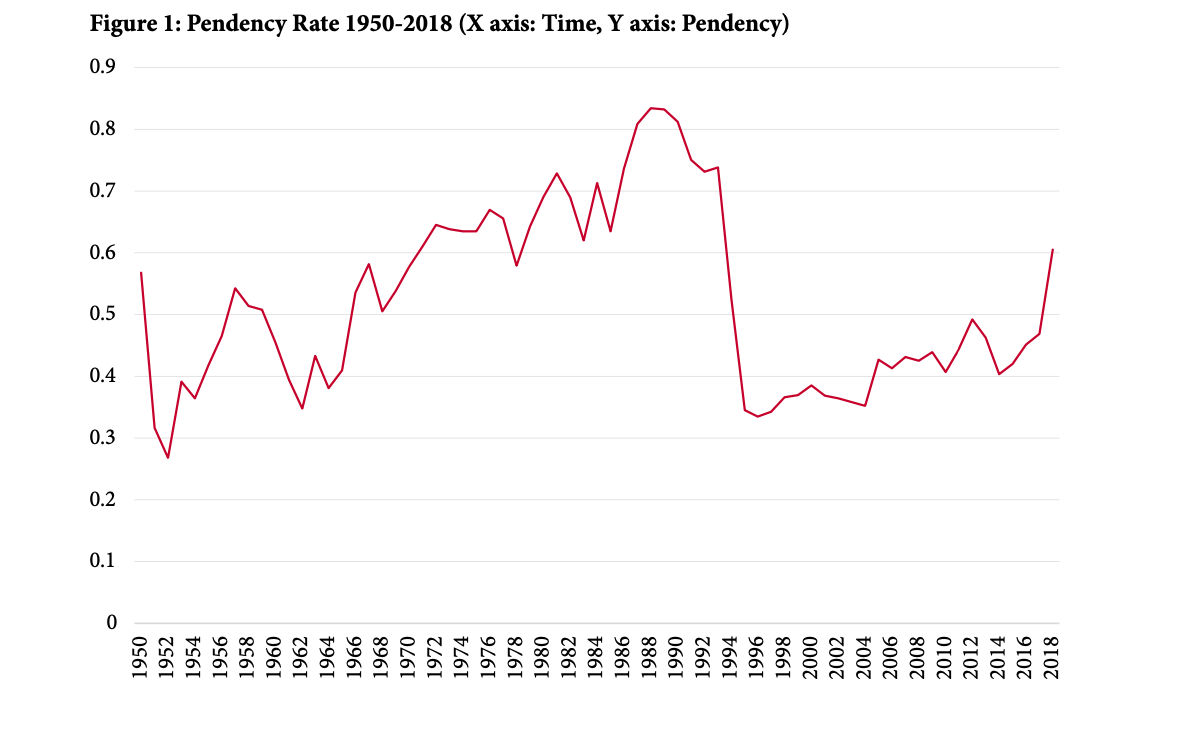 The report quantifies “efficiency” in terms of an input-output ratio, where input is expressed in terms of case institution and filing, and output is measured in terms of the number of cases disposed of and the quality of the judgement.

While in equation III, the control variable has been dropped to evaluate the impact of time in isolation on pendency. Equation II, fitted for the sub-period 1950-1993, indicates that time and population growth have an insignificant impact on the pendency rate. However, the control variable of population is dropped, we see that the pendency rate increases significantly with time (Equation III). Thus, time has an impact on pendency only if population growth is not considered. 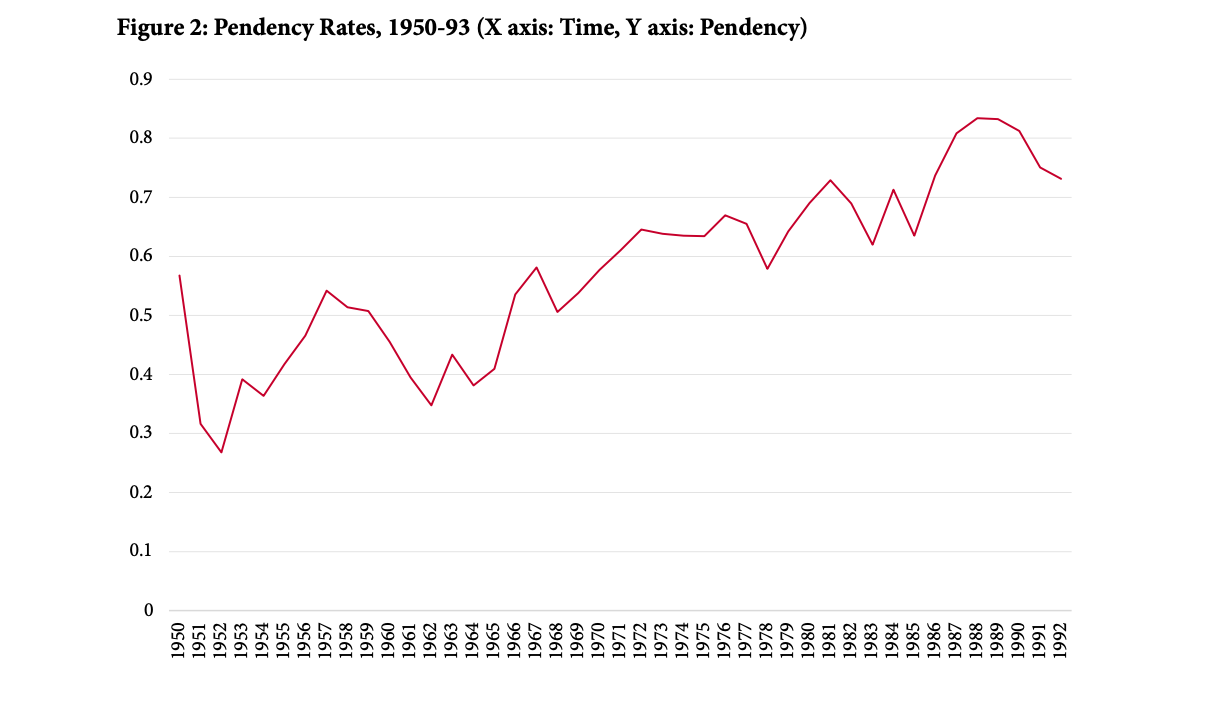 In the sub-period 1994-2018, Equation IV indicates that time has a positive impact on the pendency rate, while population has a negative impact. 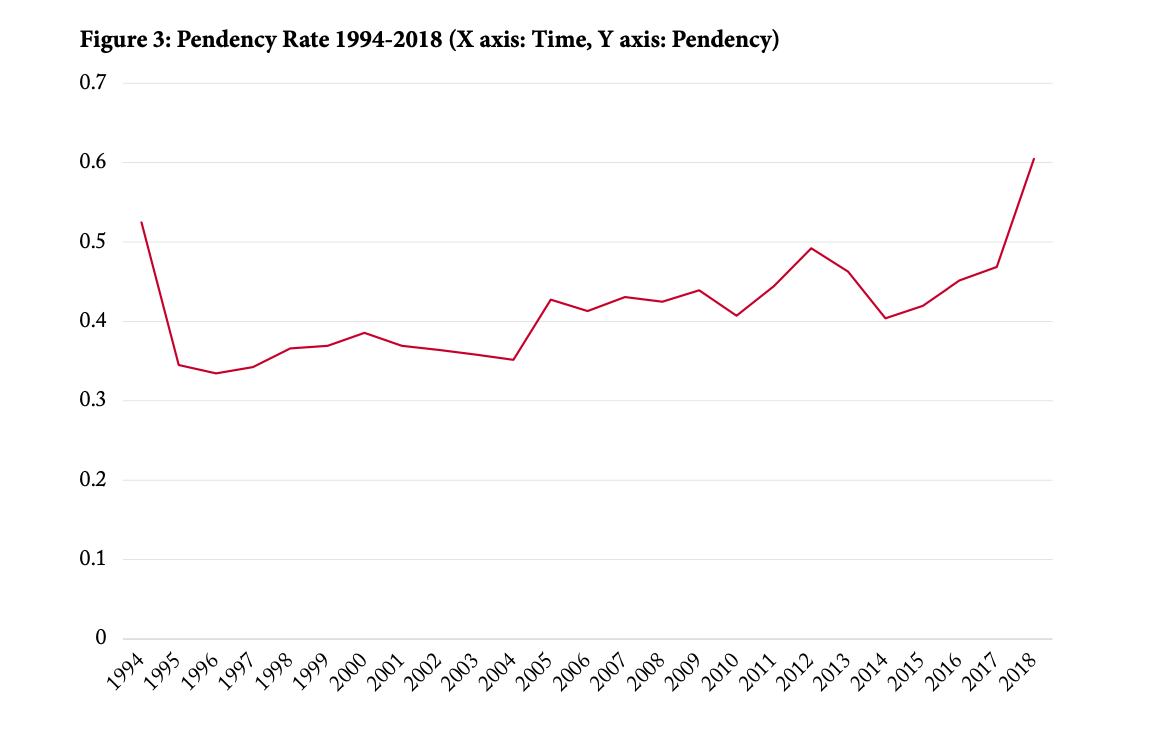 Also read: What does data on pendency of cases in Indian courts tell us? 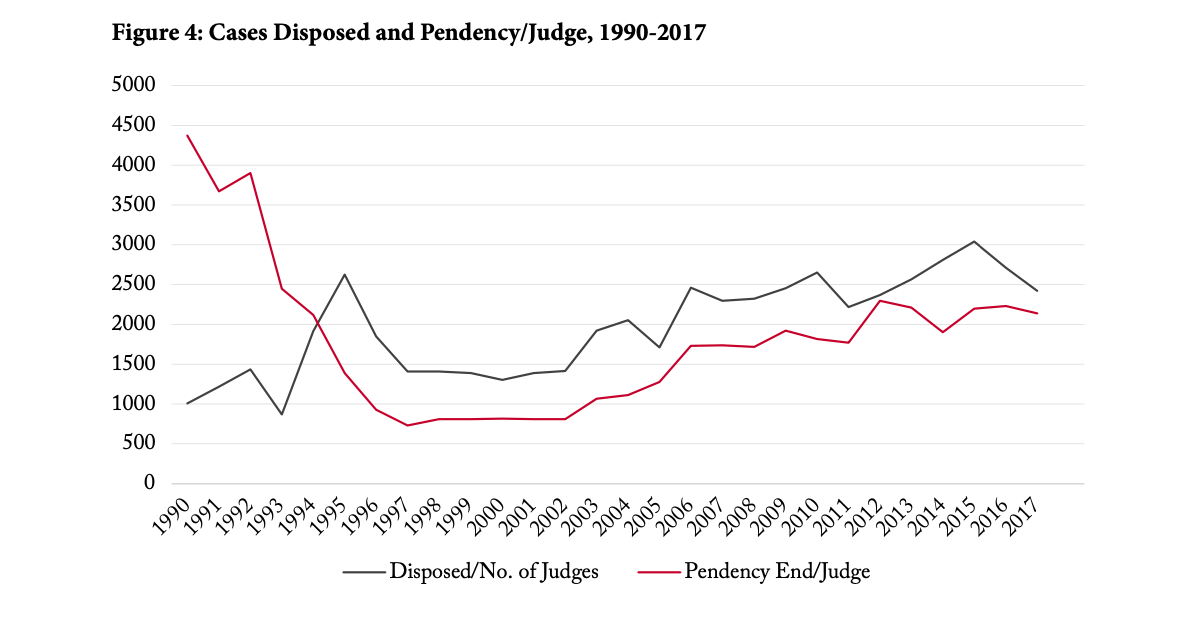 In High Courts,  there is a great number of new filings and appeals from lower courts. This continuous growth in case filing is likely due to rising population, literacy, per capita income and growing public awareness about constitutional rights. The state of pendency is varied across High Courts, and depends on its size, infrastructure and judge power.

The study finds that clearing the existing pendency in the subordinate courts would need the recruitment of 33,748 more judges.

The issue of mounting pendency can be attributed to higher case filing and lesser disposal. There is currently a pendency accumulation at the rate of 10% per annum in High Courts.

To analyse pendency in the High Courts, the independent variables taken were judge to population ratio, Growth of Net State Domestic Product (NSDP) Per Capita and civil case load. The analysis finds that the judge-population ratio is a significant determinant of case pendency in the high courts, with a negative sign indicating that an increase in the ratio considerably reduces pendency.

A rise in the ratio by 1 will reduce the pendency rate by 0.46. However,  it is not only the number of judges that is essential for improving disposal efficiency, but making sure that they remain motivated and productive. Without suitable incentives for judges, increasing their number will not be effective.

Pendency in the subordinate courts is increasing due to economic capacity and overall consciousness. Of the variables, the judge-population ratio is statistically significant. Thus, it has an appreciable effect upon pendency reduction.

The study finds that clearing the existing pendency in the subordinate courts would require the recruitment of 33,748 more judges. This is based on the average yearly disposal calculated for the four years of 2015-16 to 2018-19. Further, to prevent recurring pendency pressure, 1,225 judges would need to be recruited regularly, in addition to the working judicial officers numbering 16,714. Here, analysing efficiency would also need to take into account the quality of judgments.

The other two variables, i.e., net state domestic product (the socio-economic factor) and legislative procedural law (criminal cases/total caseload) do not show any notable impact upon the pendency problem.

When comparing the pendency issues in the High Courts and Subordinate Courts, the model for effectiveness for the high courts is higher than that fitted for the subordinate courts, which shows that the former has better explanatory power than the latter. While comparing the variables influencing pendency, the judge-population ratio emerges as a common significant factor in both models.

The measure of social and economic conditions (NSDP per capita), being an exogenous variable, does not show any difference in its influence on case pendency in the subordinate courts, but has a negative and significant impact in the high court.

Pendency in the Supreme Court could be considerably reduced by improving judge productivity in terms of case disposal.

According to the study’s calculations, the additional number of judges needed in high courts to clear pendency is 992 and in subordinate courts is 16,516. The study also notes that these numbers are far higher than the results from the pilot study by the Delhi High Court and Daksh, which estimated the requirement to be only of 43 additional judges in Delhi courts. This is due to the fact that the pilot study  was of 11 courts under the Delhi High Court’s jurisdiction, while this study’s analysis is a macro one, covering all high courts and subordinate courts, and their total pendency.

The study concludes by stating that for the improvement of judicial efficiency and efficient case disposal, there needs to be a strengthening of the judiciary through the recruitment of more judges. An increase in judicial productivity can significantly bring down case pendency, it finds.

The analysis finds that the judge-population ratio is a significant determinant of case pendency in the high courts, with a negative sign indicating that an increase in the ratio considerably reduces pendency.

Lastly, it recommends that the procedural complexities of litigation be kept to a minimum to save time and highlights the need for inclusion of better rural coverage of the judicial system, which will ultimately lighten the burden on subordinate and high courts.