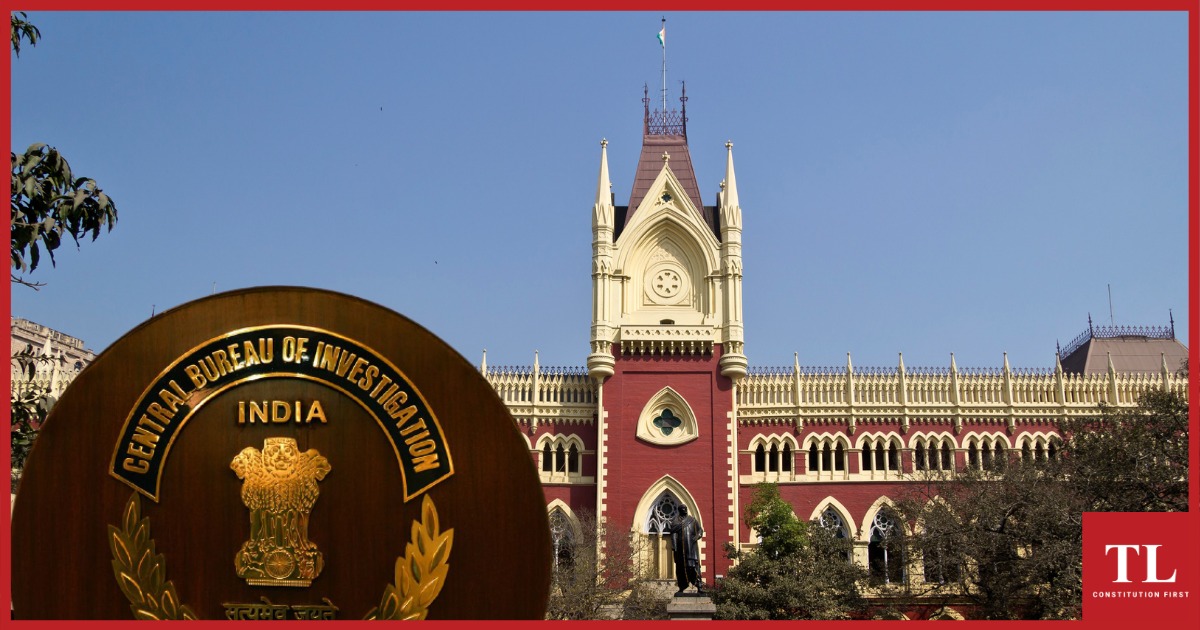 Raising an alarm-This is not procedure established by Law

I raise here an alarm for the imminent death of the rule of law. When procedural laws are ignored, the gateway to arbitrariness is opened, as can be seen from the recent order passed by the High Court of Calcutta (read the order here). I am amazed that an order staying a judicial order granting bail has been passed, not on an appeal from that order, but on the basis of a letter (read the letter here) written by email by the CBI to the Acting Chief Justice of the High Court, complaining that the Chief Minister and the Law Minister of the state, alongside several of their supporters, numbering between 2,000 to 3,000, had entered the CBI premises and prevented it from doing its job. The prayer in the letter is reproduced below:

“Under the above circumstances, this Hon’ble High Court at Calcutta may kindly issue necessary direction to the Hon’ble Chief Minister and the State Administration to allow to function legally and not cause any disruption in their duties.”

Now, let us look at the facts of the case. An FIR was filed in 2017 for alleged offences under the Prevention of Corruption Act, 1988 against 12 leaders and ministers in the-then West Bengal government from the All India Trinamool Congress, namely: Mukul Roy, Madan Mitra, Sultan Ahmed, Iqbal Ahmed, Firhad Hakim, Sougata Roy, Kakoli Ghosh Dastidar, Prasun Banerjee, Suvendu Adhikari, Souvan Chatterjee, Subrata Mukherjee and Aparupa Poddar, and IPS Officer Syed Md. Hussain Meerza. Investigation in relation to the present accused was complete. Sanction was sought from the Governor of West Bengal for filing the charge sheet and commencing the prosecution.

It is a different matter that it is the case of the state government that the Governor was not the appropriate authority to grant the sanction. Even so, the critical question that arises is where the need of arrest of the accused was once the investigation was complete. The argument that being powerful people, they could interfere with the evidence and make it disappear does not hold, since they were influential people in 2017 as well, and could have made the evidence disappear at any point between then and now if they wanted to. Their credentials made it clear that they are eminent politicians who would not flee justice. One of the accused, Subrata Mukherjee, has been a distinguished politician for the last 50 years and has represented India at the ILO. He was a minister in the Indian National Congress-led West Bengal Government led by Sidharth Shankar Ray in 1972-77.

Apart from that, it is important to look at the timelines. The four accused persons were arrested at about 9 a.m., and taken to Nizam Palace, the headquarters of the CBI, at 9:30 a.m.

It appears that at some point in time the Additional Solicitor General of India (ASG) addressed an email to the Acting CJ of the High Court alleging that the Chief Minister was inside the CBI premises with her supporters, preventing the CBI from doing its job. The exact time when the email was written is not known. This letter was not supported by an affidavit to establish the facts, either. It is not clear at what time this letter was addressed to the Court since a copy was not made available to the State Counsel till much later.

On the other hand, those present say that the Chief Minister did go to Nizam Palace, considering her ministers were arrested, met the Deputy Inspector General, and left. She was not accompanied by protesters inside the CBI premises, nor did she prevent anyone from doing their job.

The relevant portion of the letter addressed to the Acting CJ is as follows:

“However, after their arrest the followers of the above named accused persons have indulged in unruly behavior at Nizam Palace and several other places in Kolkata.

Thousands of the followers of the arrested leaders have laid a seize of the CBI building at Nizam Palace, Kolkata-20. Even a battery of lawyers led by Shri Kalyan Bondoopadhyay, MP of forcefully entered the CBI office and started hackling the CBI officers and staff including the Head of Branch. All these happened in presence of the Hon’ble Chief Minister of West Bengal Smt Mamata Banerjee who also arrived around 10.50 hours and sat in a Dharna along with arrested accused persons. She demands unconditional release of all accused persons from the CBI office itself. She also directed all accused persons not to proceed for medical examination. Despite request, the Hon’ble Chief Minister and her associates are still camping in the CBI office and causing hindrance in executing the legal process after arrest of the accused persons.”

Should these allegations not have been supported by an affidavit before any relief could be granted on the basis of the letter? We have been informed by those who were present at the hearing that the matter was mentioned at the High Court before the bench presided over by the Acting CJ for urgent orders. The Court apparently refused to take up the matter, saying that this was an “administrative matter”.

Meanwhile, both parties applied for a virtual hearing before the CBI court in light of the pandemic. The matter for bail was taken up before a CBI judge virtually, with arguments commencing at around 2:30 p.m. At about 4 p.m., the judge indicated that bail was being granted and that the bail bonds may be kept ready. The bail order was signed at 6:45 pm and the bail bonds were made ready by 7:15 p.m.

The order records that the investigation was complete and a charge sheet was filed. It also records the objections to the order granting sanction for prosecution. It then goes on to record submissions that in the time of COVID, the judiciary all over the country has been attempting to decongest prisons and grant bail as much as possible. It was argued that one of the accused was already recovering from COVID, and was under heavy medication. Considering that the investigation was complete and there was no danger of flight, the Court, in a reasoned order, granted bail. (read the bail order here)

While so, the matter was mentioned before the High Court at 2 p.m., and it was directed to be listed at 6 p.m. At that time, the Advocate General asked for a copy of the letter on the basis of which the hearing was taking place. A copy was given to him at about 6:20 p.m. During the course of oral arguments, the Solicitor General, appearing for the CBI, without a petition to that effect, orally asked for a transfer of the case/trial under section 407 of the Code of Criminal Procedure, 1973 (CrPC) to another court. No affidavit was filed making out a case for transfer, which, even on a petition, is very rarely given.

The hearing in the High Court went on till 7:45 p.m., at which point the judges adjourned. At about 10:05 p.m., the order was declared. Notice was issued on the prayer to transfer the case under section 407 of the CrPC. The bail order was stayed. Meanwhile, the accused were not released from the custody of the CBI on one pretext or the other and remain in custody.

The operative part of the order reads as follows:

“In our opinion aforesaid facts are sufficient to take cognizance of the present matter with reference to the request of the learned Solicitor General of India for examination of the issue regarding transfer of the trial. We are not touching the merits of the controversy but the manner in which pressure was sought to be put will not inspire confidence of the people in the rule of law. As during this period when the arguments were heard, the order and was passed by the Court below, we deem it appropriate to stay that order and direct that the accused person shall be treated to be in judicial custody till further orders. The authority in whose custody they are kept shall ensure that they have all medical facilities available as are required and they are treated in terms of the provisions of the Jail Manual.”

On these facts, several questions, both of fact and law, arise from the order of the High Court:

The hearings before the High Court and the CBI court were going on simultaneously. The oral prayer made by the Solicitor General kept changing in real-time – first demanding that the trial be transferred to another court under Section 407 of the CrPC; then, in the midst of arguing, when he received news that an order of bail was granted, he made an oral prayer for stay of the order of bail.

An application under Section 407 CrPC needs to be filed by way of a petition which then goes to a single judge. No such petition was filed. The division bench presided over by the Acting CJ took it upon itself to issue notice on that prayer, effectively keeping the case before the division bench.

If an appeal had been filed against an order granting bail, this appeal would have also gone to a single judge. Now, effectively, the question of bail, which has been stayed, will remain before the division bench.

The order granting bail records that at least one of the accused was recovering from COVID, and was on heavy medication. The order also records that all courts, including the Supreme Court, had recommended decongestion of prisons on the ground that they provide fertile ground for spreading of COVID.

One wonders: who will be responsible if the said accused (Madan Mitra) dies in prison due to COVID? After all, the Supreme Court has held in its landmark judgment in Naresh Kumar Mirajkar vs. State of Maharashtra (966 SCR (3) 744) that courts cannot be held responsible for violations of fundamental rights.

The cardinal principle of liberty jurisprudence is ‘bail, not jail’ has been upheld as recently as late last year in its Arnab M. Goswami vs. State of Maharashtra (2020 SCC OnLine SC 964) judgment, in which the Supreme Court had held that every constitutional court must protect the right to life and liberty, and analyze the facts of the case before it for granting bail.

In the CBI court, the CBI had not even sought custody since the investigation was complete. All they wanted was judicial custody. Where was the question of any allegation of fleeing from justice which would warrant judicial custody? There was no such allegation placed on record.

If this is not the death of the rule of law, I don’t know what is. Need we remind ourselves that Article 21 of the Constitution reads:

What happened in the High Court of Calcutta was not a procedure established by law.

At the time of writing, there is news that an application has been filed by the state of West Bengal and the accused for a recall of the High Court order.

The CBI seems to have forgotten what the Supreme Court reminded us of in its Vineet Narain vs. Union of India (1996 (4) SCALE 3) judgment: “Be you ever so high, the law is above you.”

Two of the arrestees, Madan Mitra and Sovan Chatterjee, have been shifted to a hospital due to their age and medical condition.