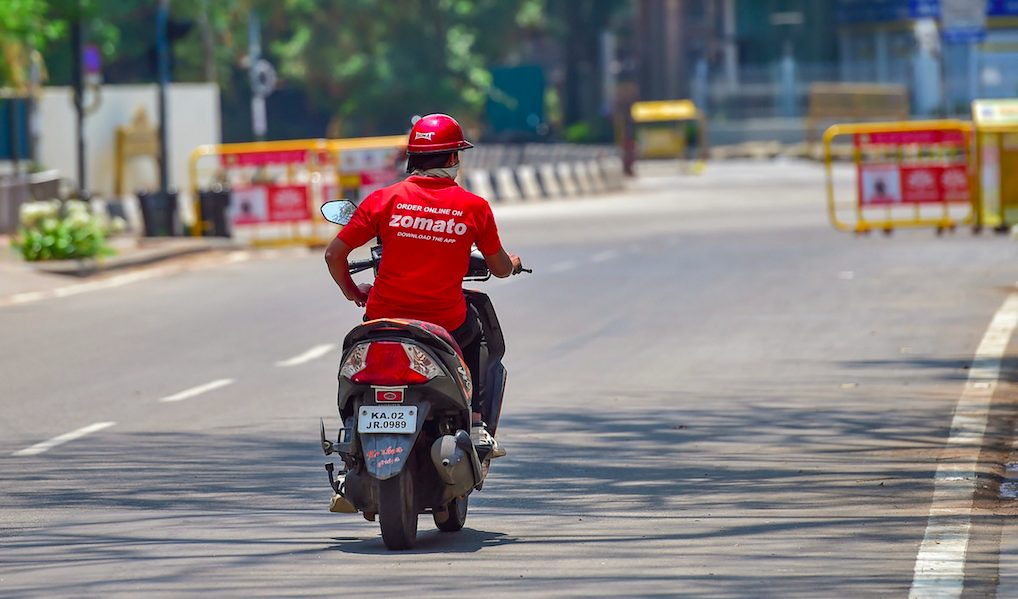 Shedding light on the problems that food delivery app workers have been facing in the post-pandemic period in India, NILABHRA BHATTACHARYA advocates for gig workers’ recognition under all the labour codes that were passed by the Parliament in 2019 and 2020 to provide them minimum labour protections and rights.

RECENTLY, the food delivery apps Swiggy and Zomato have come under severe criticism over social media over the plight of food delivery workers. It has been alleged that these workers are not only severely underpaid, but are also not getting the minimum job security that they rightfully deserve.

The crisis that the COVID-19 pandemic unfolded has majorly impacted the informal workforce in India and gig workers, especially food delivery workers, have not been left unaffected. While the pandemic has no doubt adversely affected these companies, but on scrutiny, it has been revealed that some of the adverse actions against workers were planned before the pandemic, as claimed by former and current Swiggy and Zomato food delivery workers.

Under the ambit of labour laws, employees of a company are to be provided with some basic protections like minimum wage pay and occupational safety, but Swiggy and Zomato have attempted to bypass this by choosing not to address their workers as employees but as “partners” so as to avoid providing them these labour benefits.

It has been reported that during the pandemic, Swiggy had cut the “base pay”, i.e. the minimum delivery fee per order, of riders to Rs 15, which is a reduction of 57% of their salary.  Additionally, they also implemented other pay cuts and even introduced some new schemes like the ‘multi-order scheme’ which severely impacted the earnings of the workers when fuel prices reached historic highs.

Before the pandemic, the food delivery workers were earning up to Rs 40,000 a month if they worked for sufficient hours, because of which many persons left their steady, non-gig jobs to take these opportunities up. However, post pandemic, the amount barely touches Rs 20,000, combined with fuel and bike maintenance costs, which comes to about Rs 3,000 a month.

As a consequence, when these workers from different cities logged out of their apps and went on a strike, Swiggy, instead of lending its ears, sent bouncers, or “threat managers” to deal with them. The company even deactivated the accounts of some delivery workers. The coup de grace was when it hired third-party manpower agencies like Rapido and Shadowfax to substitute the drivers at a higher price, until they could no longer continue the strike.

Also read: Hands that deliver food are struggling to feed themselves

The lack of accountability and remunerations which includes absence of first-mile pay, lack of long-distance return bonus, no minimum wages provident fund, difficulty in accessing accident insurance and reduced per order delivery fee only goes to show why these food delivery workers demand labour law protections in order to prevent further exploitation.

India’s gig economy is currently at a budding stage while growing rapidly because of the ever-increasing working population, many of whom are digital users.

However, the pandemic has adversely hit gig workers’ pay. A survey by Flourish Ventures, a global fin-tech venture capital fund deduced that almost 90% of gig workers (conducted among ride-sharing drivers, delivery workers and house cleaners) in India have lost income during the pandemic. The survey also noted that 44% of the respondents had taken to borrowing, 45% had cut consumption, 83% had used their savings and 57% had used their loan moratorium to reduce or halt payments on their debts.  From this data, it is evident that the job of a gig worker is never secured, especially in times of crisis.

A landmark judicial decision in USA, that paved the way for recognition of gig workers was the California Supreme Court’s judgment in the case of Dynamex Operations West, Inc. vs. Superior Court of Los Angeles (2018), which held that it was the duty of the hiring entities to determine whether a worker is an independent contractor or an employee and if he/she falls in the net of wage order.

In this case, the court opined that in order to determine so, three factors are required to be established in what is called the “ABC test”, where (A) the worker is free from the control of the hirer regarding the performance of the work, (B) The worker performs works which is out of the usual course of the hirer’s business and (C) The worker is usually engaged in an independent established trade/occupation/business which is of the same nature as of the work discharged. So if the hiring company is unable to establish any part of this test, then that worker would be considered an employee, and not an independent worker.

This judgment was later codified in the California State Assembly Bill in 2019 which enhanced the safety of gig workers in the state of California.

Also read: The gig is up: international jurisprudence and the looming Supreme Court decision for Indian gig workers

What the Indian government has done so far

In India, the Parliament, in 2020, passed the Code On Social Security, whose objective was to congregate at least 250 million unorganized workers, including gig workers, within the social security net in the coming five years and providing benefits like old-age pensions, health insurance, disability aids, among other things, to all of them. The Code also constituted a ‘National Social Security Board’ comprising five representatives of the aggregators/gig workers and platform workers, and any other such members which the union government may deem appropriate, working solely for the welfare of gig and platform workers.

Even in the Union Budget of 2021-22, Finance Minister Nirmala Sitharaman proposed to implement a social security scheme for platform and gig workers which would cater to the needs and demands of these gig workers.

Unfortunately, the Code is yet to be implemented across the country due to rules thereunder not being framed by different states. The social security scheme proposed by Sitharaman has not been actually operationalized yet, either.

What remains to be (urgently) done

Apart from these, there are still some pertinent issues that have been left unresolved.

Firstly, the overlapping of the definitions of unorganised, platform and gig workers in the Code has created a conundrum. If there was no appointment letters and regulation of work timings by the employer, a worker working for one app-based cab who might work for its competitor as well, would also fall under the definition of a gig worker as well as a platform worker, as he pursues his occupation via an online platform. Interestingly one can even be categorised as an unorganised worker as he/she is self-employed. If such overlapping definitions continue to exist, then which specific schemes would apply to them remains ambiguous.

Secondly, while the government recognised that gig workers require protection, they have only been granted recognition under the Code on Social Security, whilst being completely excluded from the provisions of the Code on Wages, 2019 and the Occupational Safety, Health And Working Conditions Code, 2020. Minimum wages and occupational safety are both essential rights for these workers. Hence, there is an urgency to include gig workers within both these Codes as well.

Thirdly, even if these food delivery workers are not considered as employees but as partners, they deserve the right to form legally recognised unions. The right to form unions should not be restricted to employees only, since gig workers’ unions will be better able to voice the true and collective interests of these workers, thus promoting a better work culture. It is imperative, therefore, that these workers are granted such rights under the Industrial Relations Code, 2020.

Also read: As Lockdown turns One, let us Look at Gaps in our Social Welfare Architecture

On one hand, where the food delivery apps hailed their food delivery workers as heroes in public, in reality they were being subjected to various kinds of exploitations which only aggravated during this pandemic. So long the working conditions remain unregulated, the incentive system arbitrary, and no access is given to collective bargaining power, and the workers would be left with no other choice than to resign in mass numbers, thus damaging the already distressed gig economy.

The State and these food delivery apps need to recognise and extend to these workers all those benefits which are similarly enjoyed by the traditional employees so as to ensure equality of law. Even if it is not feasible to categorise these workers as employees, they should at least be recognised as a separate category of workers altogether, and be extended to all such monetary benefits and occupational safeguards that suit the gig economy framework.

While lawmakers in other countries have pushed back against such exploitative tactics, it is now time for India to step up by providing formal protection and legal recourse to gig workers.

(Nilabhra Bhattacharya is a second year undergraduate law student at the Rajiv Gandhi National University of Law, Patiala. The views expressed are personal.)