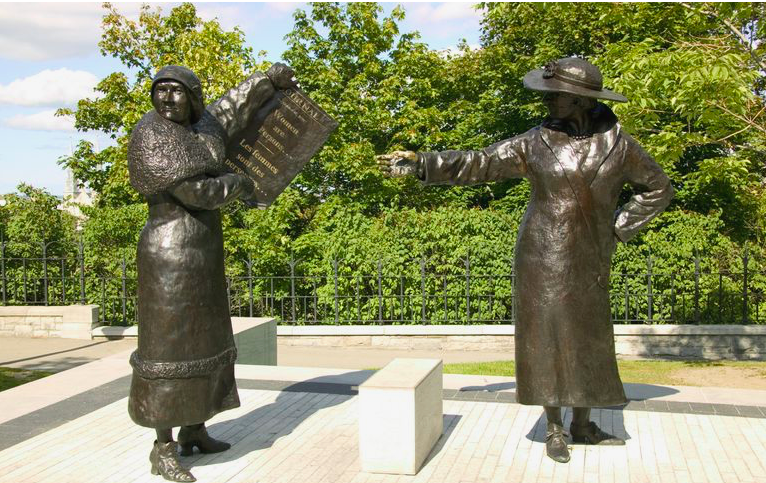 [dropcap]I[/dropcap]N 2015, when Justin Trudeau was asked by a Journalist to explain the inclusion of 50% of females in his cabinet, he said: “because it is 2015”. However, until 1928 women were not even considered “person” to be appointed to Senate (Parliament) in Canada. In 1928, a Privy Council ruling in Edwards v Canada or the “Person’s case” paved way for women to sit in the Senate. The case is a reflection of Emily Murphy struggle to have females declared as “persons” under the British North America Act, 1867.

Murphy’s struggle for women rights started in 1916 when her judgment was challenged by a lawyer simply because it was rendered by a woman. Murphy was the first woman magistrate in the British empire in Canada. On her first day in Court, a discontented lawyer challenged her ruling against his client on the ground that Judge Murphy, a woman, cannot be considered a person and was therefore not able to perform the duties of a magistrate.

To support his argument, he cited an obsolete judgment of 1876 by an English Court which had ruled that “Women are persons in matters of pain and penalties, but are not persons in matters of rights and privileges. Since holding the office of magistrate is a privilege, the current magistrate sits illegally and no decision coming from her court may bind anyone”. This precedent, however, was overruled by the Supreme Court and the appointment of Emily Murphy was upheld and her rulings were validated.

After her victory at the Supreme Court, Murphy became a beacon of women rights in Canada and several women organizations, newspapers, demanded her appointment as the first woman to represent women’s interest in the Senate.

But this demand was not well received and irked many of the Senators and the judges of the time who were against the idea of admitting a woman to Senate. The then Canadian Government disputed the inclusion of women as ‘persons’ under section 24 of the British North America Act (B.N.A), 1867 (now called Constitution Act 1867) that made only ‘qualified persons” eligible to be appointed as senators and declared that a ‘Person’ under B.N.A was legally understood as a reference to men. Enraged by the rejection and narrow reading of the law, Murphy petitioned to the Supreme Court to decide whether section 24 of the BNA included women as ‘qualified persons’?

This regressive view of the Court was a big disappointment for Murphy and many other women rights activists. But the verdict did not affect Murphy’s resolve to fight and she decided to file an appeal before the Privy Council which finally decided the issue in her favour making women eligible to contest and be appointed to the Senate. The Privy Council observed that the intention of section 24 was not clear. It found the scope of the section to be ambiguous and to dispel the ambiguity the Court decided to give the section a wider interpretation. The Court went on to record that “justice requires judges to consider an evolving social context when they interpret laws”.  It overruled the Supreme Court reasoning and held that if the Parliament wanted to exclude women from the senate, then they would have said so. The Court said it best when it wrote:

“To those who ask why the word person should include females: the obvious answer is why it should not. The exclusion of all women from public offices is a relic of days more barbarous than ours, but it must be remembered that the necessity of the times often forced on man customs which in later years were not necessary.”

Thus, the case became famous for two reasons: first: women became eligible to sit in the senate and second that it established the “living tree doctrine”:  a constitutional principle of interpretation that requires a constitution to be viewed as an organic document and must be read in a broad and liberal manner so as to adapt it to changing times.

Though Emily Murphy fought hard to become Canada’s first female Senator, she did not get to sit in the Senate. After her death in 1933, a bronze plaque was installed at the entrance of the Senate to recall her victory in the Person’s case.