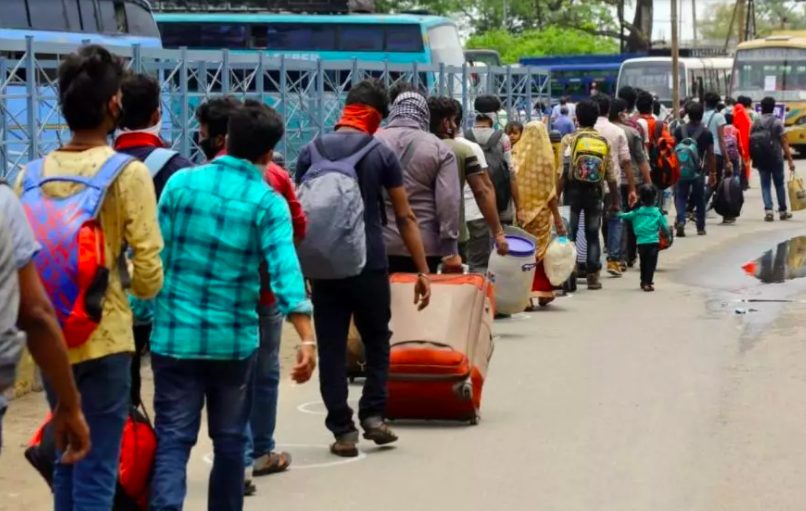 The COVID-19 pandemic has exposed India’s hollow development strategies aimed at achieving sustainable development goals (SDGs). It has not only brought to the fore the need for revisiting our strategy to move toward a better and equitable world harmonious with nature, but has also thrown light on how the present processes will not help in achieving any landmark advancement in getting closer to the SDGs.

What we are witnessing is a catastrophe. To elucidate further, there are a few important areas that need immediate attention and intervention:

Climate change: Climate change, a topic assuming increasing importance in the present times, requires wilful interventions across the world. The anatomy of this silent crisis explains the challenges that the world faces. Half of the world’s human made atmospheric carbon dioxide was emitted in the last 30 years and in this period, 20 companies that produced 33% of emissions (energy and cement) are still at work and continue to grab subsidies for fossil fuels, etc.

Biodiversity: Losses of biodiversity and of redundancy, which can be termed as the ‘mutual living together of species’ is accelerating at a rate not found since the cretaceous extinction some 66 million years ago.  And then we have pen-pushed scientists of capitalism who say that we should not worry about the loss to biodiversity,

To concerns raised that if honeybees are extinct, human beings will also disappear from the planet, these scientists say: “Not to worry, even if they lose them, we can have robotic honey bees!” What can one expect from such people?

Nitrogen: Vast excesses of nitrogen through fertilisers run off etc., are polluting water bodies and soil and risking anoxic extinctions.

Land use patterns: Change in land use patterns for industrial growth is also causing water scarcities. The mainstream argument on climate change is often rather paralysed with theories of reductionism. Many parts of the complex interactive systems that overplay such a change are being negated.

The Green New Deal which is gaining ground in the US and the push for democratic control of companies in the UK led by the Labour parliamentarians suggest that the issue of climate change cannot be limited to mere reductionism. Rather, a system different from the present neo liberal capitalist system, based on accelerating production, needs to be encouraged.

This was pointed out by none other than John Closs in the UN Habitat III at Quito in 2016, stating that the laissez faire system of planning and building our world and cities is absolutely unsustainable. We must go back to the basics of planning and ensure that we build a free and equitable world.

This leads the second argument that there is a strong relationship between climate change, demand for climate justice and the sustainability of people, inequality and gender parity.  The past four decades of unbridled neo-liberal capitalism, of which privatisation was a key driver along with commoditisation of use value items, has been a big reason for widening inequities in the world.

This is how. Things and utilities that were of use value for the people and society, were systematically converted into exchange value. There was commoditisation of utilities that were a part of public good earlier. Take the example of water, is it a right or a need? The Washington Consensus one of the big pushers of the  argument that water is a need and that anyone in the market can provide that. Slogans and fancy jargons like 24*7 water supply etc., became the hallmark of such campaigns, and public utilities were asked or were motivated to abandon the vital responsibility of providing water to the people, which was thus opened for privatisation.

Likewise health, education and many other utilities that were considered to be the responsibility of the State or its apparatus and were systematically handed over to private corporate giants.

In health, we find the worst crisis hitting us during the COVID-19 pandemic, reminding us that privatisation of health cannot be a sustainable model of development. Thousands of crores of rupees are amassed by privatisation and the withdrawal of the State from these sectors.

According to Ursula Hews, an economist, nearly 20 large transnational corporations have shifted their portfolio from finance to utilities, realising the massive profits in these sectors.

The second area of phenomenal wealth generation or accumulation of capital has been the changed nature of city governance, which has metamorphosed from being managers to entrepreneurs.  This has had serious repercussions on the inequity indices in the urban world. Cities were asked to compete against each other and their land laws were made flexible for the private and venture capital to enter and make substantial gains. One major area happened to be real estate. Instead of taxing capital, it was allowed to make huge dividends at the cost of the public assets.

Take the example of privatisation of  urban commons. In India, this would mean open spaces, water bodies, parks, etc. These were handed over to real estate capital at throwaway prices and now we are in a situation where instead of solving the housing crisis, we are in the midst of its severity.

Likewise, cities were systematically asked to shift their planning process, which even earlier was hardly in their hands, to corporate consultant giants, who charge the moon to prepare plans on city development, mobility, sanitation, solar city, smart city and what not. A cursory review of these plans shows that instead of aiming at sustainability, most of these plans encourage use of capital-intensive technologies for finding solutions. And the nexus exists from the top to bottom.

These are completely unsustainable ways of development and no way can India reach the SDGs with such unscrupulous nexus- driven strategies.

This also leads to a situation where massive surplus gets generated from the people, who are not just being robbed off their assets but even their capacity to fight. The shape of Indian cities has changed considerably. From 75%, the informal sector has jumped to 93%. The Oxfam report stated that the gap between top 10% asset holders and bottom 10% asset holders in rural India is 500 times, whereas in urban India, it is 50,000 times. One can imagine the hollowness of the slogans of sustainability in such grim realities.

In addition, because it is the large informal sector where 85% of people have no contracts to maintain their services and nearly 90% sustain on an income of less than Rs. 8,500 per month, one can understand how the pandemic has shattered lives and livelihoods. Women are the worst affected.

The other big inequity is the great digital gap. The hullabaloo created by technological giants that digitisation of services will bridge this gap, is completely erroneous. We can see this gap in the form of students taking classes online, people applying for vaccination and not getting slots, among others.  Above all, information technology  is viewed as an industry and the internet of things (IoT) is supposed to be a market of nearly $5 trillion, according to a Bloomberg report. How do we democratise the gains of technology is, therefore, a more important question.

This leads to this article’s third argument that pertains to the unsustainability of urban governance. Because it still happens to be guided by neo-liberal capitalism where one cannot imagine any resolution of challenges. The democratic structure of elections poses a serious threat to this march of urbanisation and, hence a novel way of bypassing the elected councils is being sought via Special Purpose Vehicles or in ‘smart cities’. These SPVs decide which form of development is to be prioritised. To say the least, this is not just an alienated form of work style but also increases inequity among regions and people.

Finally, coming to gender inequity, which is linked to all the above, and is at its worst. India is marred with twin forms of gender inequality — the vestiges of a feudal mindset continue to treat women as second rate citizens, and the kind of ongoing economic development that treats them as commoditised subjects. No wonder, India slipped 28 places to the 140th rank among 156 countries in the World Economic Forum’s Global Gender Gap Report 2021, becoming the third worst performer in South Asia. This decline took place on the economic participation front, widened by 3%.

On the political empowerment front, India regressed 13.5 percentage points; and this comes from the decrease in labour participation rate, which fell from 24.8% to 22.3%. Estimated earned income of women in India is only 20% of men, and we are at the bottom 10 globally on this indicator. Discrimination against women is also reflected on the health and survival front. India ranks in the bottom five in the world with 93.7% of this gap closed to date.

All these data screams out that this inertia cannot be broken by the present capitalist order, as we found in the Ease of Living Index, which further reinforced that it capitalism needs to be built with a human face. But we have seen how erroneous this view is and continues to be.

The alternatives flow from various interventions that are needed in the field of politics, politics of participatory mode, the model of governance; in democratising the surplus back to citizens, fighting for the commons, collectivisation, alternative planning in mobility, city development etc.; decentralisation and democratisation of various processes of planning and decision making; and so on.

Unless India does a course correction, we will falter and fall, losing out on nature, planet, humanity and biodiversity. We cannot afford to be smug and indifferent about this imminent threat waiting to crumble humankind.

The writer is former Deputy Mayor of Shimla, Himachal Pradesh. The views are personal.