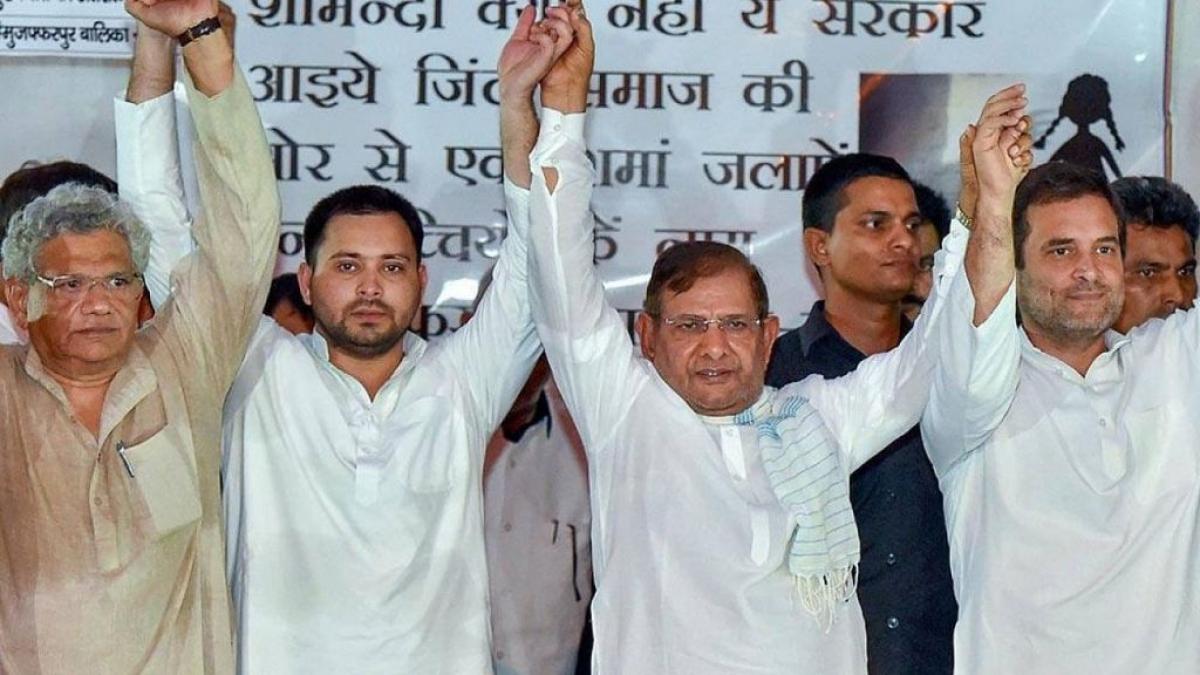 Bihar results may set example for a united opposition to propel anti-BJP sentiments across the country in forthcoming Assembly elections writes NITYA CHAKRABORTY.

The Assembly polls in Bihar, the first phase of which begins on October 28, has assumed unusual significance in national politics. It is signalling at last some possibility of a big anti-BJP backlash if the outcome on November 10 becomes favourable to the Rashtriya Janata Dal (RJD) led Mahagathbandhan (Grand Alliance).

The electoral campaign in Bihar has undergone many twists and turns in the last three weeks since the poll dates were mentioned.

Now, in the final days before the three phase polling starts, the ground has become unusually volatile with the RJD-led front getting unprecedented response from the voters which has stunned the front leaders themselves.

The Left workers are fully involved in the campaign for the alliance and this has given a special boost to the RJD and the Congress in the marginal seats.

After the latest rallies of both Prime Minister Narendra Modi and the Congress leader Rahul Gandhi, seasoned political observers of Bihar scene are surprised to find that Tejashwi is steadily filling the gap. By November 7, when the third and the last phase of polling will take place, Bihar voters might go for a change.

The situation is ripe with that possibility and that has made the BJP leadership jittery.

A numerical game in favour of Opposition

The opposition alliance has got a big momentum with the pro-active partnership of the Left Front which is contesting in 29 seats in all of which the Left parties have sufficient base. With the support of the RJD and the Congress supporters, it will be quite comfortable for the Left in winning a majority of these 29 seats as they mobilise their united strength of grassroots workers.

The Left workers are fully involved in the campaign for the alliance and this has given a special boost to the RJD and the Congress in the marginal seats. In both 2015 Assembly elections and in 2019 Lok Sabha elections, the CPI and the CPI-M were not part of the opposition alliance but this time, from the beginning, the parties are together and that has given both programmatic and organisational cohesion of the RJD-led front.

The Bihar alliance pattern is an ideal for the opposition in the context of taking on Prime Minister Narendra Modi and the BJP nationally.

In the 2020 Assembly elections in Bihar, the poll figures of both 2015 and 2019 have become irrelevant. This is a new situation with a new agenda and the focus is more on the jobs for the youth in Bihar, in which the Nitish Government has failed completely.

Chirag Paswan led Lok Janshakti Party (LJP), which is contesting against Janata Dal (United) (JD(U)) in all the seats on its own, will act as a spoilsport in at least 30 constituencies where LJP has got some influence. Further, the passing away of the LJP founder Ram Vilas Paswan just before the poll, can give some emotional support of voters to Chirag and that might affect the JD(U) candidates.

The JD(U) is under tremendous pressure from both BJP cadres in its bases and the LJP candidates and that is evident in the way the Chief Minister Nitish Kumar is losing his cool in the recent public meetings.

A clear opposition against a clear singular ruling party

The Bihar alliance pattern is an ideal for the opposition in the context of taking on Prime Minister Narendra Modi and the BJP nationally. There is total failure of the Narendra Modi government in all areas, especially economy and social harmony. The Hindutva brigade has been allowed free run because the opposition is divided and has no firm programme and strategy to fight the BJP and the Sangh Parivar. Now the ruling NDA does not matter after Akali Dal and Shiv Sena’s departure. It is BJP all the way. The Centre, which is with the party, is making use of the central agencies to tame the opposition leaders many of whom are not that clean.

The blatant misuse of the central agencies like the CBI, ED and NIA by the BJP government has been possible because the PM and the ruling leadership know that they have the power till 2024. If the opposition remains divided, then the BJP under Narendra Modi may continue even after.

In sum, the BJP is to be fought unitedly by the secular parties both in polls and in agitations outside, apart from fighting in Parliament.

India is still a democracy and the elections are being held as per the Constitution. The opposition parties are participating. People are giving their mandate. As long as power at the central level remains with the BJP, the saffrons will change India the way they like, because they have the mandate till 2024.

It is in this context that the Bihar outcome is important.

The Bihar opposition victory will galvanise the anti-BJP forces and that will have impact on the Assembly elections in 2021.

The most important is the poll in Assam, where the BJP is in power for the first time but with a low voting percentage. The party can be voted out in the next Assembly elections if there is a united front like Bihar. The Congress, AIUDF and the Left parties have to join a front in Assam like Bihar so that the BJP gets a big jolt in North East where it started expanding only after the 2019 Lok Sabha elections. The voting figures are against the BJP in Assam and if a programmatic unity of opposition is formed in Assam, the BJP can easily be defeated.

The state Assembly elections are due in Tamil Nadu, Kerala and West Bengal also in the middle of 2021. In Tamil Nadu, the anti BJP front is solid under the DMK leader Stalin. The DMK leader led the front in the last Lok Sabha elections with big victory and the same is expected to be maintained in the next Assembly poll also. All indications suggest that DMK led front will have a big mandate in the coming Assembly elections. In Kerala, the fight is between the CPI-M led Left Democratic Front and the Congress led United Democratic Front. The BJP is not a big factor and if any of the Fronts will be the winner, the state will remain with the secular parties.

As regards West Bengal, the situation is delicate. The BJP has got the taste of blood by getting 18 seats in the 2019 Lok Sabha polls as against 22 by the Trinamool Congress of Mamata Banerjee. BJP is desperate to win the Bengal elections this time. All its resources and muscle power are being mobilised to snatch victory. As of now, Trinamool is better placed as the ground reports indicate. The earlier enthusiasm for Modi in Lok Sabha polls which led to unprecedented voting figure of 40 per cent in favour of BJP in 2019 polls, is not there, but the communal polarisation has taken place to a big extent.

If the opposition remains divided, then the BJP under Narendra Modi may continue even after.

The Congress and Left may fight together but the election battle is polarised between the TMC and the BJP or between Mamata and Modi. There is little scope for a third combination to be considered by the voters. Those who want a change, will vote for BJP not for the Congress-Left combination.

The three parties Congress, Left and Trinamool which are part of anti-BJP struggle, should think of ways how to reduce the seats of BJP so that the saffron scan not take over Bengal in 2021 poll. That will be the biggest setback in the eastern region if BJP somehow manages the majority of 294 seats.

It is improbable at the moment, but the BJP performance in the last Lok Sabha polls, was also unexpected. The anti-BJP secular parties of Bengal must discuss the issue from the national perspective of fighting BJP and not from the narrow state angle. Keeping away BJP from power in Bengal in the 2021 state polls is the biggest responsibility of the Congress and the Left as well. This third combination might have valid reasons to be angry with Trinamool but the ground reality is that Mamata has only the power to keep the BJP at bay from state power. If Mamata tastes defeat in 2021 Assembly polls, that will be only at the hands of BJP and not by Congress=Left combine.

In sum, the BJP is to be fought unitedly by the secular parties both in polls and in agitations outside, apart from fighting in Parliament. If after capturing Bihar, the opposition can unseat Assam in the state Assembly elections and keep West Bengal out of BJP, while taking over Tamil Nadu, that will impart such galvanisation of anti-Modi sentiments in the country and impact the next lot of Assembly elections.

And all these will lead to the decisive battle in 2024 Lok Sabha elections. Bihar can be the starting point of that opposition turn around.

(Nitya Chakraborty is a veteran journalist and Editor in Chief of India Press Agency.)