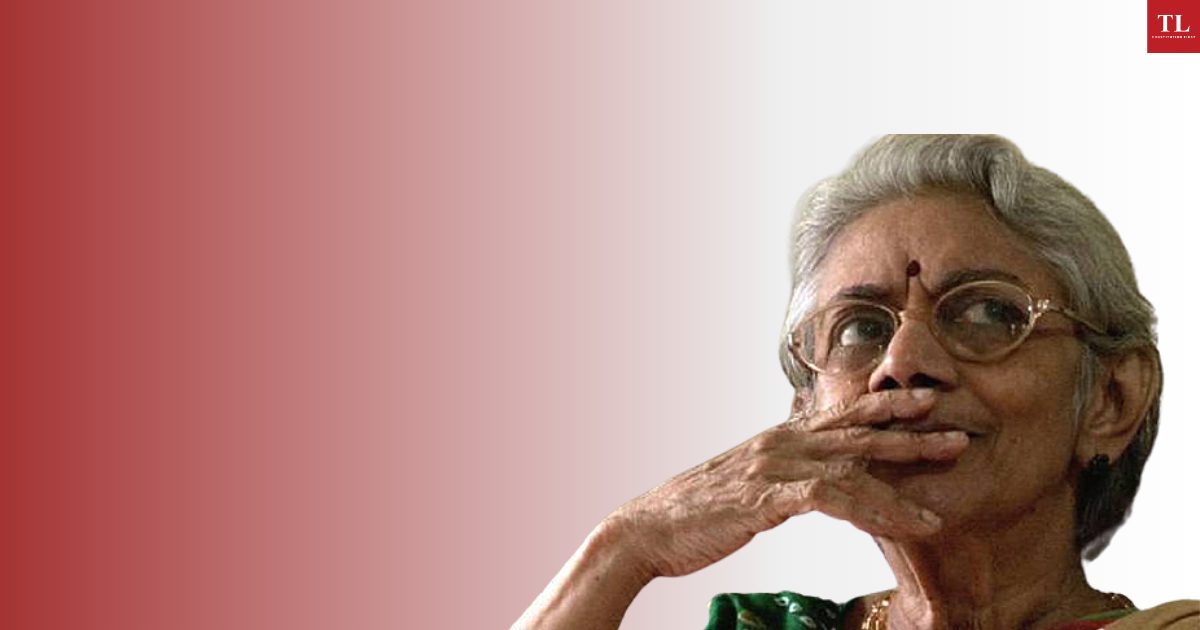 Paying tribute to the life of the recently departed women’s rights and trade union activist Mythili Sivaraman, R. VAIGAI looks back at her career, her advocacy of social justice issues, her remarkable track record of securing justice for the most marginalised members of society facing the brunt of State excesses, and her prolific writing about the issues that she championed throughout her life.

“FREEDOM is indivisible. There is no question of freedom for one and none for the other. We have to stand united for complete freedom,” said Mythily Sivaraman, a Marxist, trade unionist, and women’s rights activist, who left us on May 30, 2021.

Comrade Mythily, a friend, a mentor and an inspiration to many, was a towering intellectual with a steely resolve to bring about social and political change.

She dedicated her life to the causes she espoused: the rights of women, workers and the underprivileged. Her understanding of the intersectionality of caste, class and gender oppression and politics, coupled with her erudition and ability to mobilise people at the grassroots level, is unparalleled.

Beginning of her journey as an activist

A daring trip to Cuba as a young woman without proper legal travel documents, and her exposure to the American civil rights movement and the anti-Vietnam war protests steeled her resolve to fight imperialism and capitalism. Rejecting a coveted job offer in the United States, Mythily returned to Chennai in 1968, to work for a better social order.

Tamil Nadu then witnessed one of its most gruesome caste violence atrocities. Forty-four women, children and elderly family members of Dalit agricultural workers were burnt alive at night in Kizhvenmani, a village in Thanjavur.

The horrific act was seen as a retaliation by landlords against the workers’ act of ‘defiance’ by seeking better working conditions on being organised by communists.

Mythily’s immediate travel to Kizhvenmani, despite prohibitory orders by the police, and meticulous documentation of caste atrocities in those fertile plains of Tamil Nadu is now legendary, woven into the history of the peasant movement. The series of articles written by her, exposing the horrors of the heinous crime to the world, would today be considered as a remarkable piece of investigative journalism.

The tardy investigation by the State into the Kizhvenmani incident and the acquittal of all those accused remains a black mark in Indian history to this day.

Mythily then decided on active political work, and joined the Communist Party of India (Marxist).

Leading trade union protests in the 1970s and 80s

The 1970s and 1980s were decades of radical trade unionism in India. Mythily spearheaded workers’ protests and union negotiations when the mantle of leadership fell on her young shoulders as many of the usual leaders were incarcerated or had gone underground during the Emergency period in 1975-77.

Unfazed by the violent repression of union activists, she was present at the gates of factories with the protesters every day – organizing and helping the workers stay united even when their leader V.P. Chinthan was brutally stabbed by hired henchmen and was battling for his life.

The strikes and protests by workers at Simpsons, Ashok Leyland, Metal Box, Tablets India, MRF and numerous other companies, led by Mythily, are major milestones in Indian labour history. The militancy of agitations led by her prompted the management of TI Cycles to call Mythily’s husband Karunakaran, an officer in the company, to ask him to instruct his wife to withdraw from the union activity. Karunakaran instead chose to resign from his job.

Mythily went on to mould many workers into fiery trade unionists.

In 1973, Mythily co-founded the Democratic Women’s Association (DWA) in Tamil Nadu, which was the forerunner to the All India Democratic Women’s Association (AIDWA), one of the world’s largest women’s rights organisations, of which she was the first Vice President. In her effort to remove ignorance among women, particularly poor women, Mythily put together a band of young lawyers to provide legal aid and education to women in Tamil Nadu.

Under Mythily’s leadership, AIDWA campaigned relentlessly to prevent all forms of violence against women. Of particular significance was her emphasis on the importance of gathering evidence and documentation, which is sorely missed in mass organisations that exposed an alarming rate of female infanticide in the Salem district.

The Tamil Nadu Government was compelled, in 1992, to introduce the ‘cradle baby scheme’ that provided cradles at government hospitals and primary health centres to receive unwanted newborns and put them up for adoption. Soon thereafter, the Pre-conception and Pre-natal Diagnostic Techniques (Prohibition of Sex Selection) Act, 1994 was enacted.

There are few women leaders who have been as inspirational as Mythily. Her ability to engage in scholarly writing, while also staying involved with mass movements, was a rare quality. She was also a good strategist, adept at combining agitational tools with legal processes to get justice.

When five fishermen were killed in police firing in 1985 during a protest against their eviction for a beach beautification move at the Marina Beach in Chennai, it was Mythily who organised a fact-finding team headed by Justice V.R. Krishna Iyer. The report by the team led to the constitution of a commission of inquiry, and the state government dropped its plan of removing fishing communities from the beachfront.

Mythily was a visionary. She urged lawyers to go beyond the letter of the law and push its boundaries to make law relevant to society. She had a clear vision of social justice and was able to articulate it in a way that could reach laypersons as well as the intelligentsia. She was fierce in her work and caring towards everyone. Her advice to young lawyers was: “Shed your prejudices and urban privilege, and put yourself in the shoes of a woman with no access to education or means”.

In 1986, Mythily was instrumental in assisting a dowry death victim’s family to intervene in a bail application filed by the accused. Until then, courts had not recognised the right of a victim of domestic violence to be heard. Despite strong objections, the Madras High Court permitted the victim to intervene and rejected the bail application of the accused, setting a precedent.

Mythily’s understanding of the systemic bias based on gender was very sharp. In the early 90s, Parvathi (name changed), a victim of police gang rape and the brutal custodial murder of her husband, sought justice with the assistance of women activists. The harsh struggle for survival and her interactions with women activists transformed her into a stronger woman.  The trial ended in the conviction of the accused.

At a meeting organised to mark the vindication of her rights, a speaker remarked that Parvathi had got a new lease of life on her re-marriage, and thanked the social worker for marrying her. Mythily’s quick  response was, “Parvathi got her life back through her own heroic  struggle; to say that she got a new lease of life only through marriage is to belittle her triumph.”

On June 20, 1992, Tamil Nadu witnessed one of the worst State-led atrocities in independent India. Forest officials and policemen raided Vachathi, a remote village in Dharmapuri District, in their search for the sandalwood smuggler, Veerappan, and assaulted about 100 villagers and raped 18 women. They were detained with no contact with the outside world.

Mythily’s immediate intervention along with the Tribals Association and report on the incident documenting oral testimonies was pivotal to the inquiry by the Commission for Scheduled Castes and Scheduled Tribes, and its conclusion that such violence indeed was perpetrated. It prompted the Madras High Court to order immediate relief of food, drinking water and shelter for the villagers. Ultimately, 269 police and revenue officials were found guilty of crimes under the Scheduled Castes/ Scheduled Tribes (Prevention of Atrocities) Act, 1989, and 17 were found guilty of rape; an unprecedented number of officials to be convicted in a single case.

A prolific writer in both English and Tamil, Mythily contributed regularly to journals like Mainstream, Economic & Political Weekly, and The Marxist. She was editor of the magazine Radical Review in the period of 1968-72, and wrote extensively on caste atrocities, farmers’ rights movements, and land reform measures, among other things.  Her writings on caste, class and gender remain as relevant today as when they were written.

Her book Women’s rights: A Marxist view is a prescribed reading among the left circles. Some of her articles are found in the book, Haunted by Fire: Essays on Caste, Class, Exploitation and Emancipation.

In the early 2000s, she undertook a personal journey of unearthing and piecing together her maternal grandmother’s ‘silent activism’ from her diaries. This materialised into a memoir titled Fragments of a Life – A Family Archive, which is at once a candid familial chronicle of oppressive patriarchy, and the quest for knowledge and political engagement of a woman denied education, as well as a record of socio-political events of the last century. The book is a must-read for those interested in women’s history in India.

Even during her last years, though affected by ill-health, the spark of fire never left her eyes. Mythily’s life and work inspired many young women and men to be drawn to left politics, public life and activism. That is her legacy.

The best tribute to Comrade Mythily is to work with renewed vigour to oppose the serious erosion of rule of law and democracy that we are now facing.