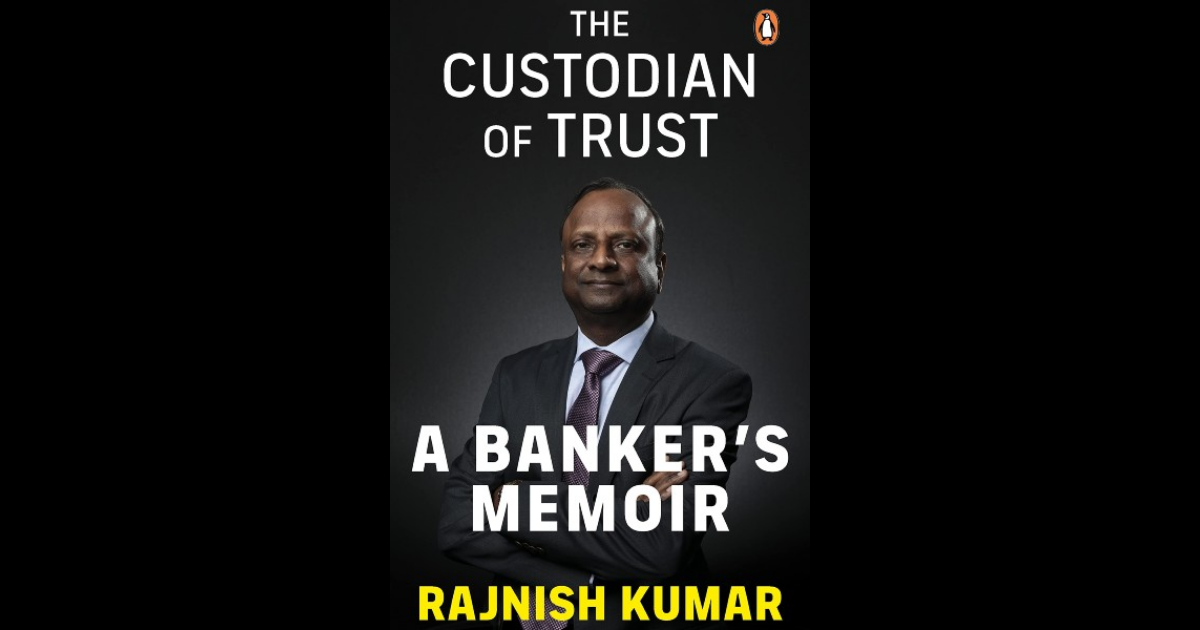 Memoirs of an astute banker

MOIN QAZI reviews “The Custodian of Trust: A Banker’s Memoir” written by Rajnish Kumar, the former chairman of the State Bank of India, to bring out the ups and downs of his banking career and how tumultuous times, including mounting bad loans, demonitisation, and the Jet Airways and YES Bank crises were overcome under his leadership.

MONEY management is no more a genteel world. In a prophetic warning, way back in 1913, English economist John Maynard Keynes wrote in Indian Currency and Finance, “In a country so dangerous for banking as India, (it) should be conducted on the safest possible principles.”  This logic appears to be the central idea as we read through The Custodian of Trust: A Banker’s Memoir – the memoirs of Rajnish Kumar, the former chairman of India’s largest lender, the State Bank of India (SBI/ the Bank).

What emerges through a combination of anecdotes and deliberations of various stakeholders of the sector is a collage of developments that document the evolution of the Bank from the prosaic lender to an astute leader defining a path-breaking trajectory for India’s largest bank.

In his memoir, Kumar shares his “incredible journey” as a banker – from joining SBI as a probationary officer in 1980 to becoming its chairman in 2017 – capturing the many milestones he recorded in the banking sector during his career. It’s a pretty tame account of an eventful tenure.

The most endearing part of the book is that Kumar, even while talking about his achievements, does not come across as blowing his own trumpet. Most memoirs memorialise to preserve a story that would otherwise be lost. Whatever be the motive, Kumar emerges as a level-headed banker. As with all good memoir writers, he is candid, authentic, and artful.

A good memoir doesn’t have to be cradle-to-grave: a slice of life, or collage of fragments, can be enough. In this case, it is the story of SBI seen through the lens of Kumar.

The Importance of a good leader

Kumar’s honesty and integrity shine through at every turn. It is a rich memoir, brimming with grace and grit. It is laced with unusual frankness and generosity and offers a clear and insightful explanation of various decisions that gives a cool-headed nod to the spreadsheets and wise judgment.

Most corporate memoirs combine simplistic lessons with vague platitudes for success.  This book is refreshingly different. Kumar’s keen and insightful explanation of various decisions gives a cool-headed flavor. He managed the turbulent financial period in the sector during his tenure with quiet fortitude and unmatched personal confidence.

Finance is a wild animal, made up of so much human drama and passion that it needs the most sophisticated minds to read and leaven the nuances that shape its contours. The biggest misconception about banking is that people think one should have a degree in business or finance to do well in this industry.

The Indian banking sector was going through one of its most tumultuous phases and was beleaguered by a mounting pile of troubled loans. The proportion of bad debts, where the borrower is not making interest payments or not repaying any principal, had surged to such horrifying levels that the banks were creaking under the strain. Several financial storms have rumbled on in the financial system, a third of which is on crutches.

The problem of non-performing loans (NPLs) had severely impacted the balance sheet and profitability of banks, especially those in the public sector. A prolonged shadow lending crisis added a massive bad loan pile onto Indian lenders with an inspirational manager who doesn’t understand the sense of urgency. The Bank appeared locked in a downward spiral.

Kumar understood the sense of urgency and took some revolutionary initiatives. Kumar’s successes in resolving so many contentious banking issues confirm the theory that versatility rather than domain expertise is the key to more holistic and profound decision making.

Kumar’s negotiation-savvy nature has been honed over the years through his diverse exposure – a clear endorsement of the fact that banking is a generalist profession dealing with diverse industries. An educational background in finance or economics may help one understand banking concepts in the beginning. But in the long run, it is the person with the right mix of personal attributes and leadership skills who will rise above the rest. These include openness to new challenges, disciplined professionalism, the ability to learn quickly and continuously, an outgoing and inquisitive nature, an analytical and systematic mind, and negotiating skills and personal integrity.

Any achieving banker will soon find himself thrust out of a comfortably known field into an unfamiliar one. They must learn the ropes by themselves before they can guide others. They must be open to challenges. A banker must master and micromanage details. A banker knows the surface of many disciplines but the depths of none, and should be ready to unlearn certain theoretical assumptions if their professional experience warrants them to do so.

Kumar’s statesmanlike leadership helped, as did his foresight. The widely prescribed traits such as chutzpah, judgment and luck can only help navigate limited roadblocks. It was Kumar’s uncanny knack of sniffing the hidden signals that forbode potential financial hazards. Kumar’s appetite for risk was prodigious but equally strong was his forensic and appraisal skills.

The tales of two crisis and their management

Kumar admits that dealing with the Jet Airways problem was one of the most difficult assignments he faced during his tenure. Most of the banks were extremely reluctant to support a resolution plan for Jet Airways. The resolution plan of the airline, unfortunately, could not get through as promoters were not able to fulfill the required conditions in the stipulated time.

SBI’s Board members were keen on a letter of support from the Government before giving a nod to the resolution plan of crisis-ridden Jet Airways, Kumar has said. The Jet Airways conundrum was compounded by a muddled thought process and the inability of the Jet management to read the writings on the wall.

Also Read: Should public sector banks be privatised after it was made to bail out badly run private sector banks?

Kumar recalls he had not faced such a difficult situation throughout his tenure. He  viewed it as a major learning experience that came in handy in resolving the YES Bank crisis. Eventually, the company stopped operations on April 17, 2019 – a sad day in the history of civil aviation in India, when one of the best airlines in the country had to be grounded.

Subsequently, the Mumbai Bench of the National Company Law Tribunal (NCLT) in June 2019 admitted an insolvency petition against Jet Airways filed by the lenders’ consortium led by the SBI. Jet Airways owed over INR 8,000 crores to a consortium of lenders led by SBI, besides liabilities of over INR 25,000 crores towards its vendors.

Also Read: A Banker’s Ordeal in the Court

Kumar further writes that he has little hope for the revival of the airline because there are hardly any assets to back as its planes are mostly taken on lease and slots are the property of airports. Revival of a grounded airline has virtually no precedence, he notes.

A major achievement of Kumar was that under his leadership, SBI finally emerged as the savior of YES Bank. SBI was reluctant to play the lender-of-last-resort role for the YES Bank but circumstances compelled it to rescue the country’s fourth-largest private sector lender. There was pressure on him to find the other investors by March 13, 2020, by the Reserve Bank of India (RBI).

Kumar also played an important role during the demonetisation. On the night of the demonetisation announcement, Kumar, who was the managing director of the SBI, received a frantic call from Chairperson Arundhati Bhattacharya asking him to meet her at her residence immediately. He reached her home at around 10.30 pm and the anticipatory action started immediately.

Kumar was instrumental in ensuring cash to every corner of the country through the vast network of the Bank. He kept the Bank’s operation up and running by keeping the morale of the workforce intact. We have a fairly elaborate account of how the Bank handled it and the fire fighting done to limit its fallout.

A major insight highlighted in the book is people management in the banking sector. Most bankers agree that a fear psychosis pervades the managerial bandwidth due to the tardy and protracted process of disciplinary inquiries. An employee charged for the transgression of the official rules and procedure is usually subjected to investigation. It is technically a fact-finding exercise.

The issue is not one of vendetta because the disciplinary process is integral to institutional discipline and the fundamental bedrock of corporate governance. While in some cases the process is completed very expeditiously, in several others, it is a lingering process that entails mental trauma and distress for the concerned employees. This affects the morale and trust of the officer and directly impacts his/her efficiency and the well-being of their family.

The employee then develops a risk-aversion syndrome. It is laudable that Kumar has given due importance to this area. The efficiency of the institution hinges on the efficiency of the individuals who run the operations. If they are demoralised, it has a detrimental fallout for the institution, which then spreads like wildfire. Kumar strongly believes that repeated emphasis on the values propagated by the organisation and its alignment with the personal values of its staff, both in the lead roles and among the rank and file, is a key to its success.

There is much useful learning from Kumar’s experiences. India’s financial community has a lot on its plate – demographic changes, structural changes, and operational changes. It is now all playing out. The most important thing at this juncture is financial stability.

It has become extremely difficult to assess which parts of the loan book could develop into default hotspots. We need a new generation of bankers of Kumar’s vintage with vigilant eyes and firefighting abilities to ensure the robust and resilient financial health of the system.

(Moin Qazi is a well-known development professional who has worked with the State Bank of India. With doctorates in Economics and English, he has also authored books on religion, rural finance, culture and handicrafts. He is also an accomplished poet. The views expressed are personal.)