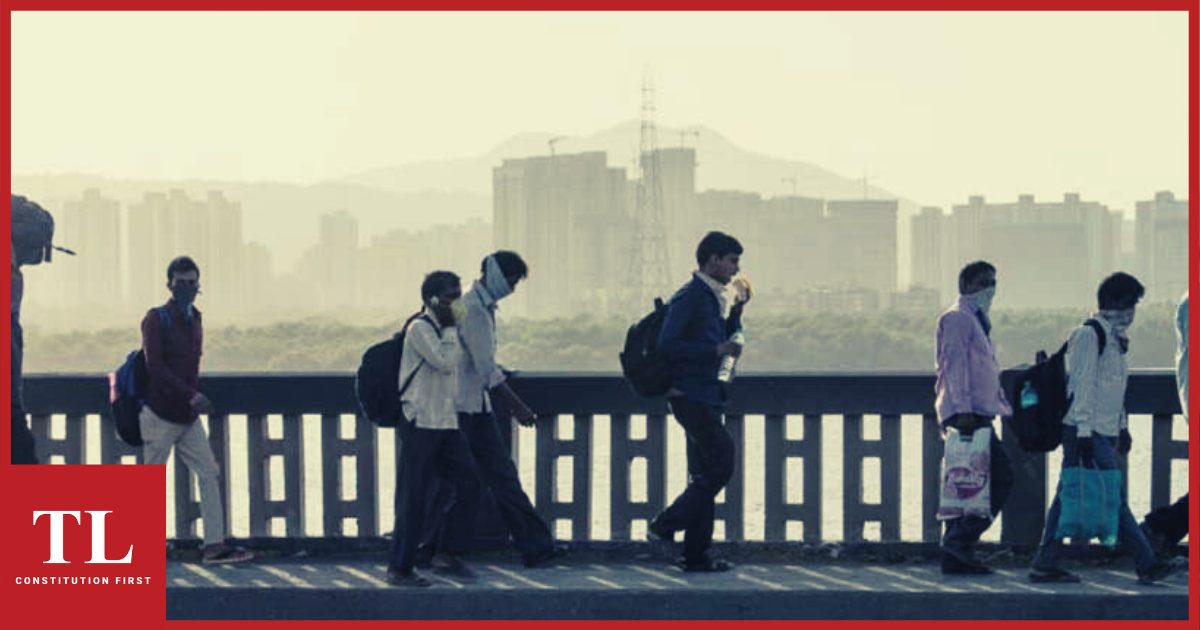 May Day 2021 – Working Class Fights for Defence Against Deadly Pandemic

On this May Day, the working class of India is reeling under the brutal onslaught of the COVID-19 pandemic which has so far taken over lives in India since last year. While the deadly disease can affect anybody, it has had the most catastrophic effect on the poorer sections of society.

With over three fourths of the Indian healthcare system in private hands, the costs of receiving adequate healthcare attention are too prohibitive for most workers, and as a result, in vast parts of the country, they have had to simply suffer the alarming damage caused by the coronavirus.

More damaging and sweeping were the effects of the ill-conceived and heartless countrywide lockdown imposed by the Narendra Modi government last year, which led to mass closures of factories and offices, with the unemployment rate zooming up to an unimaginable 24% in April 2020.

This has turned out to be monumentally wrong. The second wave of the pandemic – predicted by almost all scientists – has hit India in the most lethal manner, with daily cases increasing at a blinding near-4 lakh mark every day. More importantly, the disease has spread to the vast hinterland even as people are gasping for oxygen, medicines, transport, hospitals and even getting deprived of dignified last rites.

Afraid of imposing a lockdown after last year’s harrowing experience, the Central government has passed on the responsibility of fighting the pandemic to the state governments which, in turn, are whimsically declaring restrictions of this and that kind – somewhere there are weekend lockdowns, somewhere night curfews, and so on.

But, just like last year, no attention or thought is being given to the most crucial, life and death question that faces working class families – how to sustain themselves when earnings are stopped, or conversely, how to save oneself from the virus if one is forced to work even in the midst of the raging pandemic?

The Joint Platform of Central Trade Unions, consisting of 10 central trade unions and several sectoral federations has issued one of the most far-reaching and important demand charters for this May Day. Among various other issues, it demands that all families (that do not pay income tax) should be given direct financial support of Rs.7,500 per month for the coming months to tide over the earnings loss that they are bound to suffer because of the pandemic and/or the restrictions imposed because of it.

In addition, the Joint Platform has demanded that all families be provided 10 kg foodgrain per person for the coming three months.

These two demands, though minimal, will help the country’s vast toiling people, as most of them depend on daily earnings through hard labour, and either getting sick or having to sit at home because of COVID r

This happened last year, too, causing widespread distress and hunger. Last year, the government doled out a meagre Rs.500 per month to all the Jan Dhan account holders, which constitute only one fraction of the poor. The government had also released 5 kg additional foodgrain per person last year for a few months. This again was highly insufficient and in any case, it left out millions of people.

The demand of the Joint Platform is thus far more comprehensive and will be able to give some support to the vulnerable population, already much weakened by last year’s faulty policies.

Here is the full demand charter of the Joint Platform:

Of note in this charter are the set of demands for a better, equitable handling of the pandemic. The trade unions are demanding that vaccine production be ramped up and universal and free vaccination done in a definite time frame.

This may sound obvious to any reasonable mind – but sadly, in India, the Central government has handed over the production and sale of COVID vaccines to private manufacturers who are planning to sell the vaccine at exorbitant costs to state governments.

The Serum Institute of India, the behemoth which claims to be one the world’s biggest manufacturers of vaccines, is selling its Covishield vaccine (same as the Oxford-AstraZeneca vaccine) to State governments at Rs.300 per dose while Bharat Biotech’s Covaxin will be sold by them to states for Rs.400 per dose. For private hospitals, the price will be Rs.1,200. This makes India’s vaccines one of the most expensive in the world.

Covishield is priced at 1.78 Euro (Rs 160) in Europe and at $4 (Rs 300) in the US and Bangladesh; at Rs.237 in Brazil; and at Rs. 226 in UK, according to the Joint Platform. This is yet another example of how the Modi government is allowing the private sector to make profit from people’s misery.

Besides universal and free vaccines, the Joint Platform is also demanding that public health infrastructure be ramped up (through public spending), new, trained personnel be inducted in hospitals and health centres, oxygen supply be increased and ensured for all those who need it.

Importantly, it has also demanded that ASHA workers and anganwadi workers/helpers, who make up the vast health workforce in villages and urban residential colonies of workers be given adequate protective gear and insurance coverage to carry out the crucial work of creating public awareness, ensuring primary health and nutrition, liaising with primary and secondary health centres which they have been doing tirelessly for the past year.

The Joint Platform has also raised the crucial demand that the use of the Disaster Management Act to impose restrictions on movement or closure of work places should be such that it also simultaneously ensures that no worker faces loss of his/her job, that wages for the period that the work is stopped are paid in full, and that property owners do not evict tenants for not being able to pay the rent for the period when they are not earning.

These demands were raised last year too but refusal to accept them led to the agonising mass return migration last April where migrant workers trekked home to distant villages in hundreds of thousands, many dying on the way.

In a move that was beyond imagination, the Modi government used the pandemic period to pass several laws that would put workers’ jobs and incomes at risk. It also pushed through laws to corporatise farming and hand over trade of foodgrains to private traders. These measures would increase job insecurity and lower wages, while forcing farmers and agricultural workers to become slaves of big corporate houses.

Unfortunately, a government that is happy to allow pharma companies to make super profits in the face of this most dire situation, has little compunction in allowing employers to indulge in mass retrenchments and landlords in mass evictions. This is why the trade unions have to fight to protect the basic right to life of the working people.

MUTED MAY DAY – BUT RESOLVE IS FIRM

This May Day or Labour Day will perhaps be even more muted than last year because this time the destruction caused by the pandemic is much greater, and it is adding to the misery of the past year. It is expected that workers in small groups will hold the traditional hoisting of red flags at factory gates across the country. There will also be online meetings.

As the demand charter for May Day notes, the fight continues against privatisation of public sector enterprises, for scrapping of anti-worker and anti-farmer laws, and for economic justice.

But the fight for saving the people of the country from the pandemic’s sting, is intertwined with the fight for economic survival. And this May Day will be for pledging to carry out both – with resolve and energy.