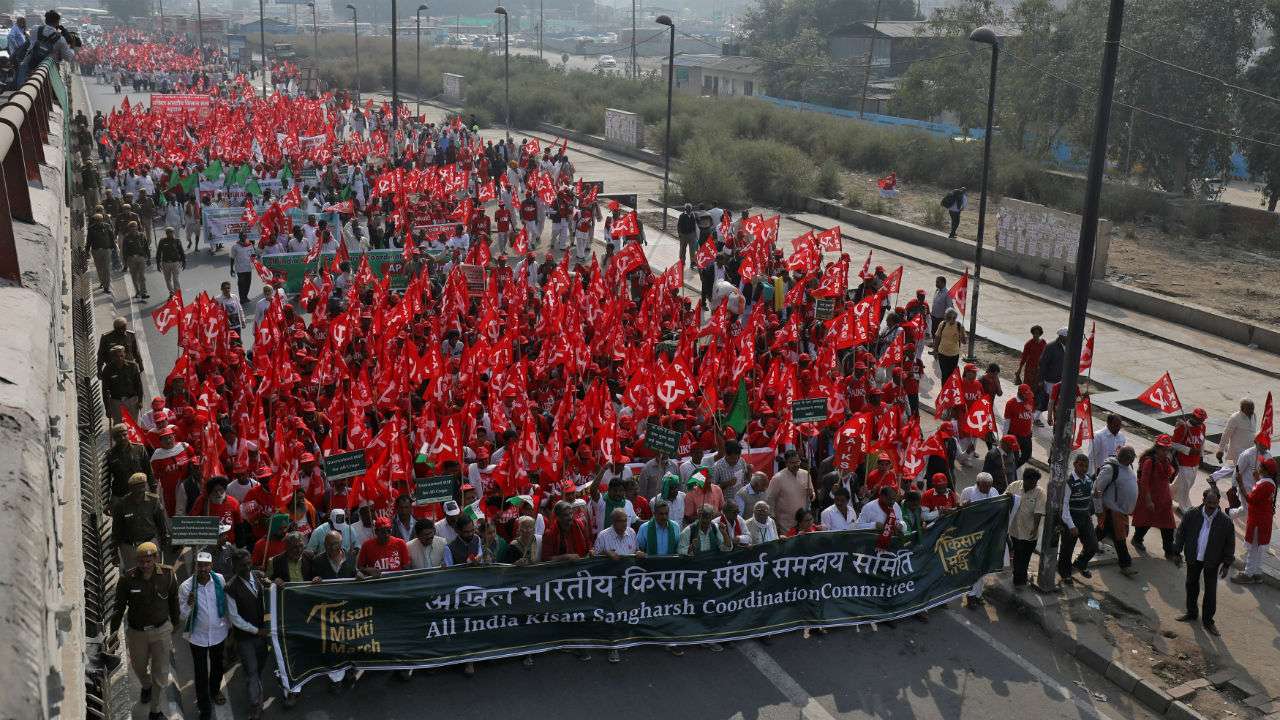 [dropcap]T[/dropcap]he November 30 rally by India’s lakhs of farmers thronging New Delhi was unique in many respects. Unlike the earlier attempts at snatching national spotlight, the entire galaxy of opposition leaders — from Rahul Gandhi to Arvind Kejriwal, from Sitaram Yechury to Sudhakar Reddy and Dipankar Bhattacharya — addressed the massive crowd. The podium itself resembled a popular front against the BJP. The speeches were all primarily political and in sum it was a BJP hatao rally.

In a clever move, instead of coming up with a charter of demands the famers’ organisations had just three demands — an unconditional all-India loan waiver, increase in MSP as per the original Swamianthan formula and, above all, a 21-day special session of the Parliament divided into seven three-day thematic sub-sessions, each with a set of very specific and well-articulated demands. Instead of pinning their hopes on opposition political parties to champion their interests in lieu of votes, the farmers were directing the parties to do their bidding and come out with their positions on specifics relating to their issues and demands. This shows a heightened level of political consciousness.

Secondly, the rally organised under the banner of All India Kisan Sangharsh Coordination Committee (AIKSCC) was primarily initiated by the kisan outfits of the left parties. Objectively, two major poles have emerged as nodal points of leadership in the farmers’ movement, one the independent non-party farmers’ organisations and the other being the coordination of left-led farmers’ organisations. But the parallel streams are no longer mutually exclusive and contending rival currents as during the days of Sharad Joshi. The pro-corporate far-right regime of Modi has brought considerable convergence and even practical collaboration among them. In fact, many farmers’ organisations have presence in both the groupings. One of the bills prepared by AIKSCC has been moved as a private member’s bill in the Parliament by a leader of the other coordination. It is a new milestone in the convergence of green and red flags fluttering side by side.

It was also a case of warm embrace of Bharat by India. The media reported in passing about the Delhi University students coming out with their own banners to march with farmers. Professionals like lawyers, mediapersons and academics rallied under the banner of Nation for Farmers and marched as a huge contingent. If the social media is any indicator of middle class opinion, the middle class solidarity was palpable.

Poll pundits usually do not lend much weightage to sectoral protests. But at some critical points, such protests like the oncoming two-day general strike by trade unions on 8-9 January 2019 against the anti-labour policies of the Modi government might act as triggers for the crystallisation of anti-BJP consciousness in the broader population. BJP’s anticipated reverses in the ongoing assembly polls might well prove to be a turning point around which all sections of voters might make up their minds to get rid of this ultra-right regime.

Two major poles have emerged as nodal points of leadership in the farmers’ movement, one the independent non-party farmers’ organisations and the other being the coordination of left-led farmers’ organisations. The pro-corporate far-right regime of Modi has brought considerable convergence and even practical collaboration among them

Anti-incumbency is often looked as an abstraction but in reality it is a process. After mobilising around some issues and among some segments of the population and spreading spatially in different areas at different pace, it gels as a generality at some critical point. Many psephology theorists have admitted that the rural opinion gels slowly and mostly as subterranean force which is difficult to capture in opinion polls. It might find expression through the ballot boxes and explode like an earthquake on the day of vote counting.

The former prime minister Atal Behari Vajpayee’s frank admission of farmers’ anger being the main cause of NDA defeat in 2004 perhaps did not sink in well among his 2014 successor Mr. Modi and his team. Maharashtra and Haryana assembly polls victories a few months after BJP’s Lok Sabha poll victories in 2014 have apparently made Modi quite complacent. In the first four years of his rule, his government could not come up with a single significant pro-farmer policy decision. It was as if the continuing agrarian distress causing waves and wave of suicides was a non-issue for Modi.

Many pro-BJP ideologues even started arguing that farmers had ceased to be a political force and agrarian issues were no longer a significant factor in deciding poll outcomes. The stunning victory in Uttar Pradesh assembly polls probably blinded them to the very bad drubbing the BJP got in Punjab. Mr. Yogi’s promise of state-level loan waiver paid rich dividends whereas even a promise of similar loan waiver could not neutralise farmers’ anger against the SAD-BJP in Punjab with its mounting farm indebtedness and suicides.

Despite promising 50% increase in MSP in the 2014 poll manifesto, all that the Modi government could do was to manipulate and distort Swaminathan’s formula of total cost plus 50% as MSP, curtail it by excluding some key costs and put up a pretence of fulfilling its poll promise. No wonder the farmers were not impressed

But BJP did feel the heat in many other States on the farm front and offered half-hearted, partial and scattered election-eve loan waivers in election-bound States even while adamantly refusing to consider an all-India loan waiver. Naturally, it would have diminishing returns. Modi government behaved as if a single measure like the modified crop insurance scheme could well take care of the more fundamental issue of viability of farming itself. No wonder, when Kejriwal, in his speech at the Delhi farmers’ rally, declared that the insurance scheme to be a mega scam, the farmers clapped in concurrence.

Despite promising 50% increase in MSP in the 2014 poll manifesto, all that the Modi government could do was to manipulate and distort Swaminathan’s formula of total cost plus 50% as MSP, curtail it by excluding some key costs and put up a pretence of fulfilling its poll promise. No wonder the farmers were not impressed. (IPA)