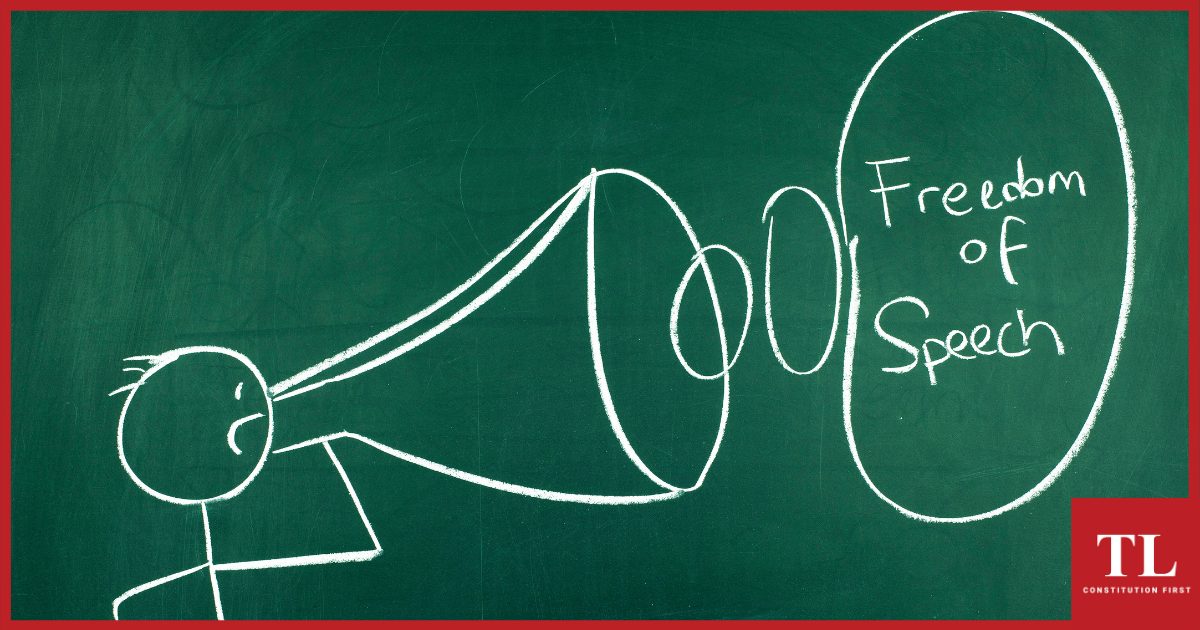 Latest salvo in the crisis of free speech in India

After the Union Government’s recent direction to a social media company to remove posts critical of its COVID-19 handling, MD. TASNIMUL HASSAN traces the evolution of the right to freedom of speech and expression in India, especially in the context of the Supreme Court’s jurisprudence on the matter. He outlines why social media censorship is anathema to the kind of free and democratic society envisioned by Article 19(1) of the Constitution of India.

THE second wave of the coronavirus crisis in India continues to rage on. Experts predict that the peak is yet to be reached. The “double mutant” COVID-19 variant B.1.617 that emerged in the second wave exposed India’s paralyzed healthcare infrastructure, as hospitals run out of beds and even medical oxygen.

It is to be noted that India increased its oxygen exports by 734 percent in January 2021, and exported around 193 million doses of vaccines. Last month the Union Health Minister Harsh Vardhan claimed the country was in the virus’ “endgame,” justifying the export of medical resources to other countries. However, at the end of April 24, the total confirmed cases of coronavirus stood beyond 16 million with less than 2 percent of the population fully vaccinated.

Recently, Uttar Pradesh Chief Minister Adityanath warranted the use of the draconian National Safety Act, 1980 (NSA) against people spreading “rumours” about oxygen shortage in the state (incidentally, between 2018 and 2020, the Allahabad High Court has quashed 94 of the 120 detention orders filed under NSA).

Both these cases are not isolated instances, but merely the latest in what has become a deliberate policy design of the State in the last few years.

What is it that prompts the government to stifle freedom of speech and expression even during a deadly pandemic? Does the contention that “the right of expression be suspended in light of the serious trouble India is in” deserve a place in a democracy like ours?

Free speech in a democracy

Lauri Hannikainen and Kristian Myntti noted that as early as 1688, the English Bill of Rights provided, “the freedom of speech and debate or proceedings in Parliament ought not be impeached or questioned in any court or place out of Parliament.” The French Declaration of the Rights of Man and Citizen, 1789, stated in its Article 11 that, “[T]he free communication of ideas and opinions is one of the most precious of the rights of man. Every citizen may, accordingly, speak, write, and print with freedom, but shall be responsible for such abuses of this freedom as shall be defined by law.”

Contemporarily, Article 19 of the United Nations’ Universal Declaration of Human Rights, 1948, states that, “Everyone has the right to freedom of opinion and expression; this right includes freedom to hold opinions without interference and to seek, receive and impart information and ideas through any media and regardless of frontiers.”

Johannes Morsink noted in one of his books that the Soviet Union proposed an amendment that would deny this right to Nazi and fascist groups. This forced drafters to consider how a tolerant and just society should be towards intolerant groups. Thus, as shown by Morsink, with Articles 19 and 7, they solved the dilemma by giving everyone two rights: the right to free speech (subject to the limitation of Article 29) and the right to be protected against hate speech. The Indian Constitution provides for the right to freedom of speech and expression under Article 19(1)(a). This right can be restricted on the basis of grounds provided in Article 19(2), which are: in the interests of sovereignty and integrity of India, security of the State, friendly relations with foreign States, public order, decency or morality or in relation to contempt of court, defamation or incitement to an offence.

The crisis of free speech

Article 19(2) of the Constitution, as first drafted, originally stated that “Nothing in sub-clause (a) of clause (1) shall affect the operation of any existing law in so far as it relates to, or prevent the State from making any law relating to, libel, slander, defamation, contempt of Court or any matter which offends against decency or morality or which undermines the security of, or tends to overthrow, the State.”

Accordingly, the Supreme Court, in the case of Romesh Thappar v. State of Madras (AIR 1950 SC 124), held that public order considerations cannot be justified under the ground of ‘security of the state’ under Article 19(2). The Court, while striking down the ban imposed by the-then Madras government on the weekly journal, Cross Roads (which was notably critical of Nehru’s policies), from entering the State, noted that such expansive restrictions were unconstitutional and that only narrow restrictions on freedom of expression were permitted. Further, in Brij Bhushan & Anr. v. State of Delhi (AIR 1950 SC 129), an English weekly, Organizer, was said to be publishing communal writings, and, thus, the Chief Commissioner of Delhi directed the publisher to submit all materials for prior censorship. In its judgment, the Supreme Court propounded that prior permission constrains the constitutional ideal of free speech, as pre-censorship of a journal would be a restriction on liberty.

Also read: The necessity of Dissent in a Liberal Democracy

As the Supreme Court decided both these cases against the State, the Parliament brought in the First Constitutional (Amendment) Act, 1951, that gave us the current version of Article 19(2), with ‘public order,’ ‘friendly relations with foreign states’ and ‘incitement to an offence’ added as grounds.

Post amendment the State’s power broadened in scope, due to which the Supreme Court, in its landmark judgment in the case of Kedar Nath v. State of Bihar (AIR 1962 SC 955), overruled a challenge to the criminal offence of sedition for allegedly being violative of the right free speech. The court upheld sedition as an offence on the ground that ‘public order’ and ‘national security’ were reasonable restrictions under Article 19(2).

Of course, the question of what constitutes a ‘reasonable restriction’ as per the specified grounds is to be decided by the Courts.

Juristic analysis suggests that, on three of these grounds, viz., ‘the sovereignty and integrity of India’, ’the security of the State’, and ‘public order’, the regulation of revolutionary speech is an important constitutional concern. Thus, for instance, sedition cases have multiplied in recent years to get hold of government critics.

Now, can the freedom of speech be curtailed? For the majoritarian-good, it often is, as several examples in the history of independent India demonstrate. There is a complex web of legal provisions prohibiting speech in various ways that individuals, especially artists, have to be aware of and be clear with.

Earlier this year, the Supreme Court, in the matter of Himanshu Kishan Mehra v. State of Uttar Pradesh (W.P. (Cr.) 48/2021), refused to grant interim bail to the producers of Tandav, a web series aired over the Amazon Prime Video platform, who were facing allegations of hurting religious sentiments. In such a situation, usually, Sections 153A [promoting enmity between classes] or 295A [insulting religion/religious beliefs] of the Indian Penal Code, 1860 (IPC), are invoked.

Later, the Allahabad High Court rejected the anticipatory bail plea of Aparna Purohit, an Amazon India executive, while making an extraordinary remark, “Western filmmakers have refrained from ridiculing Lord Jesus or the Prophet.” The statement is factually incorrect, as there is a plethora of on-screen depictions regarded as ‘offensive’ to Lord Jesus or the Holy Prophet.

It would be remiss not to mention the case of a comedian in India who spent the whole of January this year in prison for jokes that he never cracked.

Is the blockage of social media posts tenable?

The answer to this question should ideally be in the negative. The Supreme Court’s landmark judgment in the case of Shreya Singhal v. Union of India, ((2013) 12 SCC 73), commendably expanded the scope of the freedom of expression by narrowly interpreting the grounds of reasonable restrictions attributable to the right while noting that “[m]ere discussion or even advocacy of a particular cause, howsoever unpopular, is at the heart” of the right to free speech and expression.

However, just last year, two Malayalam news channels were suspended for 48 hours by the Union Ministry of Information and Broadcasting under the Cable Television Network Rules, 1994 for reporting of the Delhi riots.

On the other hand, last year the Supreme Court refused to impose a pre-broadcast interlocutory injunction on the channel Sudarshan TV’s planned telecast of its ‘Bindas Bol’ programme which was advertised as a “huge expose on conspiracy to infiltrate Muslims in government service”. The rationale offered by the Court was that it couldn’t make such an order on the basis of a mere 49-second promo clip of the broadcast, and that advised that caution must be exercised in imposing a prior restraint on the publication or the airing of views

The right to free speech, however, is not absolute, as the Supreme Court’s judgment in the case of Subramanian Swamy v. Union of India, ((2016) 7 SCC 221) propounded, “A person’s right to freedom of speech has to be balanced with the other person’s right to reputation,” it held, upholding the constitutionality of the criminal offence of defamation under Sections 499 and 500 of the IPC. There are serious flaws to it, as the governments and corporate bodies have weaponized it to attack content critical of their agendas.

The failure of the Indian State to handle the pandemic has made us bear the worst coronavirus surge in the world. However, instead of listening to its citizens and bearing accountability for its lapses, the State is currently bent on prohibiting people from even talking about it on social media.

Such attacks on free speech end in the tipping away of balance from constitutional freedom; of late, the higher judiciary seems to be complicit in this absurd process.

One must realise that liberty once lost is lost forever, and censorship is undoubtedly against the very foundation of a free society.

(Md. Tasnimul Hassan is a law student at Jamia Millia Islamia, Delhi, and a part of Students For Liberty’s Fellowship For Freedom in India. The views expressed are personal.)