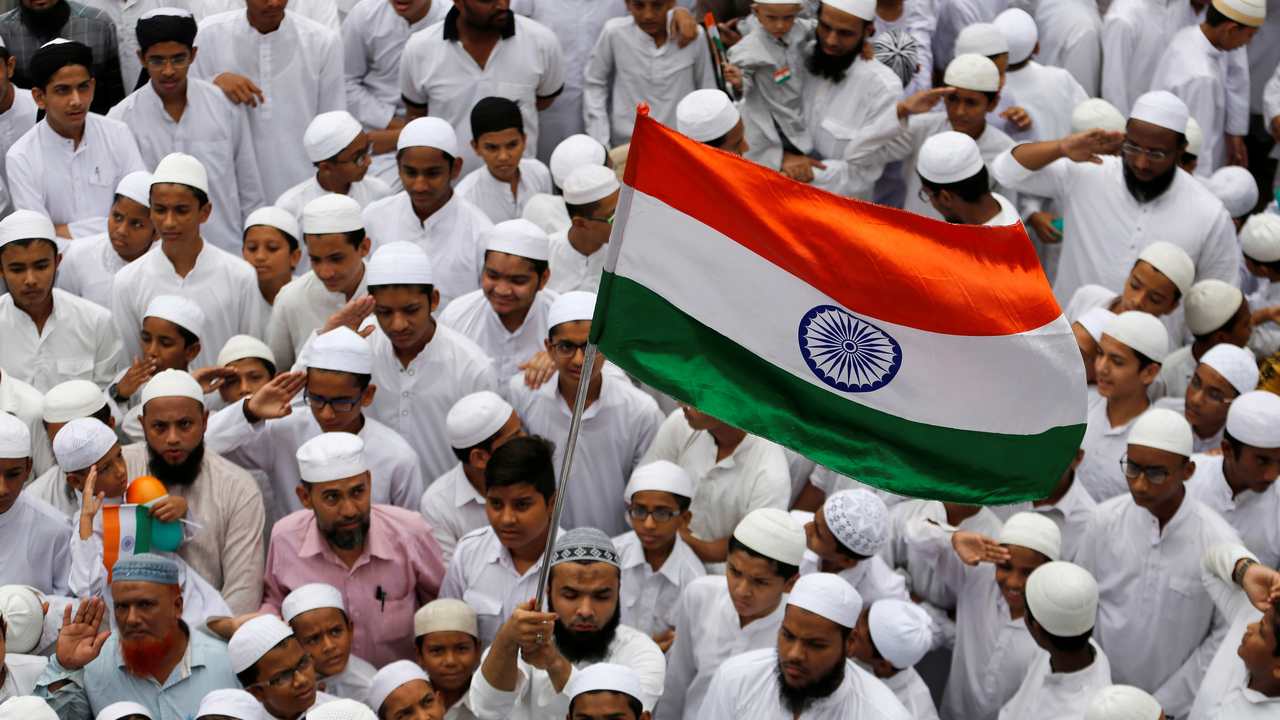 Lack of Muslim Representation in Politics: Is Only BJP to Blame?

Why do fewer Muslims make it to Parliament? Do all parties field Muslim candidates in state and national elections? Do voters elect Muslim candidates, and do non-BJP parties give tickets more equitably? What is the role of religious polarisation in Muslim under-representation in electoral politics, and what effect does the first-past-the-post-system have? OMKAR POOJARI examines the numbers and explains the trends.

Owing to the higher fertility rate of Muslim communities, their share in the population has risen from 12% to 15% over the same period. According to the Pew Research Center India will have the world’s biggest Muslim population, with about a 19% share by 2060. Therefore, it is imperative to assess the representation of Muslims in India’s political life. The most obvious way to do this is by examining Muslim membership in Parliament and the state Assemblies.

In their book, The Verdict, Prannoy Roy and Dorab Sopariwala divide India’s electoral history into three phases: Phase I ran from 1952 to 1977, the second phase was from 1977 to 2002 and the third and current phase began in 2002.

Table ‘A’- Representation of Muslims in Lok Sabha over the years

In all three phases, Muslims have been consistently under-represented in Parliament. Their representation hovered at around 25 to 35 Members of Parliament. This translates to five to six percent of the Lower House of Parliament for a community that accounts for about 14% of the population.

In the current phase, Muslim representation has hit a new low, averaging at 28, far below 74, the number of MPs that would accurately represent their proportional share in the population.

The lack of representation of Muslims in electoral politics is not a crisis of recent origin. It prevailed ever since the birth of the Republic. The recent meteoric electoral rise of the BJP has only amplified this trend and aggravated the political marginalisation of Muslims.

The numbers make it clear that the representation of Muslims (or lack of it) in politics is not a crisis of recent origin. It would be incorrect to conclude that this under-representation is a result of the BJP’s landslide electoral victory in 2014. In fact, it prevailed ever since the birth of the Republic. The recent meteoric electoral rise of the BJP has only amplified this trend and further aggravated the political marginalisation of Muslims.

Table ‘B’- Under-representation of Muslims in Lok Sabha elections

Muslims were under-represented in the Lower House of Parliament even in the first General Election held in 1952. In the first Lok Sabha, Muslims accounted for only four percent of the total strength of the House, i.e., only one in 25 MPs were Muslim. With the wounds of Partition still fresh, parties were reluctant to field Muslim candidates and voters were less likely to vote for Muslim candidates.

After 1952, the number of Muslim MPs rose slowly but steadily in each election and peaked in 1984. For the first six General Elections held until 1977, the percentage of Muslim MPs hovered from four to six percent. In two years, 1980 and 1984, Muslim representation was the highest, at eight to nine percent of the elected representatives in the Lok Sabha.

During the same period, the gap between the proportional share of Muslims in the population and the number of Muslim MPs in Lok Sabha increased exponentially, from two to 10 percentage points. This sharp decline in the number of elected Muslim representatives after 1984 undid the minor gains that had been made in the preceding years (1952 to 1980).

It may seem surprising, but after the BJP, the Congress party has fielded the second-lowest percentage of Muslim candidates. From 1952 to 2019, only seven percent of Congress candidates in Lok Sabha elections were Muslims. Even non-BJP parties have contributed to the invisibilisation of Muslims in electoral politics.

In this way, non-BJP parties also contributed to the invisibilisation of Muslims in electoral politics. The BJP, firing on all cylinders to consolidate its Hindu vote bank, coupled with the reluctance of its rivals to field Muslim candidates due to their fear of being charged with minority appeasement, has further sidelined minorities in the political arena.

It may seem surprising, but after the BJP, the Congress party has fielded the second-lowest percentage of Muslim candidates. From 1952 to 2019, only seven percent of Congress candidates in Lok Sabha elections were Muslims.

Along with this, the strike rate of Muslims in parliamentary elections has been dipping, more noticeably in recent times. Both are a cause for concern.

At 17%, the strike rate of Muslims has fallen far below that of non-Muslim (mostly Hindu) candidates, which is substantially higher at 29%. Theirs’ is a significant fall of 36 percentage points in strike rate, which indicates that the proportion of Muslim lawmakers is unlikely to increase in the Lok Sabha in coming elections.

Hindu majoritarianism is directly linked to this shrinking space for Muslims in the Indian political arena, while the first-past-the-post system that India inherited from the British Raj only makes things worse. In their book, The Verdict, Prannoy Roy and Dorab Sopariwala call the first-past-the-post system a “double-edged sword” that “hugely rewards communities if their votes are concentrated in a geographic region.”

“The more geographically concentrated the community is, the better is the multiple of seats it wins for the votes it secures. Conversely, the first-past-the-post system punishes minority communities, which are not concentrated in pockets of the country, by penalising them with fewer seats per vote. The more evenly a minority community is spread geographically, the lower is the bang/seats for the buck/vote,’’ Roy and Sopariwala elaborate.

This explains why Muslims, who are on the whole more evenly dispersed across the country than concentrated in pockets, struggle to get Muslim lawmakers elected.

The last Muslim chief minister outside Jammu and Kashmir was Maharashtra’s Abdul Rahman Antulay. Indira Gandhi was the prime minister then, India was yet to win a World Cup in cricket. Even the Berlin Wall was still intact.

The last Indian state (barring Jammu and Kashmir, the sole Muslim-majority province) to have a Muslim chief minister was Maharashtra when the Congress party’s Abdul Rahman Antulay was in power from mid-1980 to early 1982. In those days, Indira Gandhi was the prime minister, India was yet to win a World Cup in cricket; even the Berlin Wall was still intact.

In the next 39 years, not a single Muslim has been the chief minister of any state, except Jammu and Kashmir [now a Union Territory]. It is a grim fact that the number of Muslim legislators and state ministers is also declining. The BJP is the dominant political force in the country today, but it has just one Muslim MLA, Aminul Haque Laskar in Assam.

In the Bihar Assembly election in November 2020, not even one Muslim MLA ended up on the treasury benches for the first time since Independence. In Uttar Pradesh, home to about 40 million Muslims, there is not a single Muslim MLA or Member of Parliament belonging to the ruling BJP.

Political scientist Christophe Jaffrelot makes an interesting observation in his book, Majoritarian State: How Hindu Nationalism Is Changing India. He writes, “Each time the BJP conquers a new state, the number of Muslim MLAs drops. The most spectacular example is found in UP where, in 2017, their proportion went from 17 to 6 percent. While the figure of 17 percent, achieved in 2012 mainly thanks to the success of the SP [Samajwadi Party], had brought the share of Muslim MLAs closer to their share of the population in UP, the figure of 6 percent, associated with the BJP’s landslide victory, reflects an underrepresentation comparable to that of 1991, when the party had already taken control of the state.”

In no state with large Muslim populations is the proportion of Muslim MLAs indicative of their share in the population.

Gujarat, with nine percent Muslims, is at the bottom of this chart, with only two percent Muslim lawmakers in the state Assembly. All other parties are also fielding fewer Muslim candidates, evidently as a “tactic” to counter the BJP. The only inference to be drawn is that the crisis of Muslim representation in New India shows no signs of abating.

(The author is a freelancer based in Bombay and an alumnus of Mumbai’s St. Xavier’s College. His interests vary from politics, psephology, and journalism to regional Indian cinema. He tweets @Omkarismunlimit. The views are personal.)