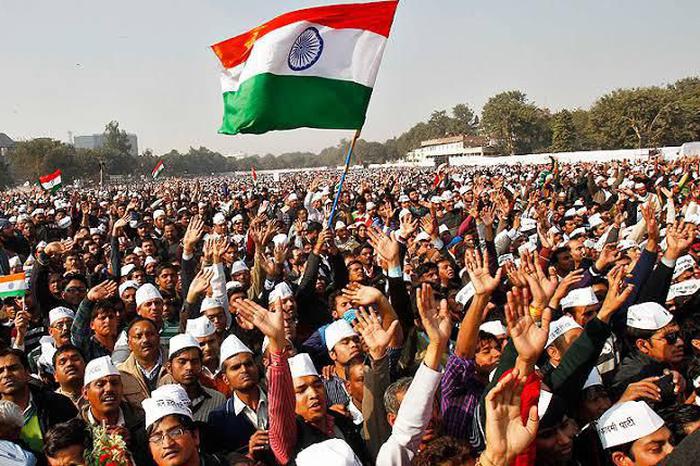 The institutional murder of 84-year-old Jesuit priest Fr Stan Swamy, who died on 5 July 2021 in judicial custody, shook the foundations of democracy in India. It has made the need to defend democracy more important and urgent than ever. FR CEDRIC PRAKASH SJ writes about the need to internalise and act on the independence struggle heroes such as Tagore, who called to “let my country awake” along with Gandhi’s “do or die” and Tilak’s “Swaraj is my birthright”.

FATHER Stan Swamy spent his life working with Adivasis in Jharkhand in defence of their rights. He did not want their jal, jungle, zameen exploited by unscrupulous and corrupt vested interests. For this, he had to pay the ultimate price! On 8 October 2020, he was arrested in the Bhima Koregaon conspiracy case, though he had no connection with it. He died waiting for a chance to clear his name.

The National Investigation Agency (NIA) judge DE Kothalikar denied him bail arguing that the “collective interest of the community” outweighed Fr. Stan’s right to personal liberty. His death has diminished the highest institutions of the justice system.

Yet, after Fr. Stan’s death, the NIA court denied bail to Anand Teltumbde, another member of the BK-16, the term that refers to advocates, artists, journalists and intellectuals imprisoned under the Bhima Koregaon conspiracy case. Now, the government is shifting some or all of the BK-16 out of the Taloja jail to an “unspecified prison” in Maharashtra.

The prison authorities, in a recent application, requested to transfer the male accused. The decision was taken solely by the NIA court without consulting the political prisoners or their families. The family members of Surendra Gadling, Sudhir Dhawale and Anand Teltumbde have challenged this decision. They allege that the purpose of the transfer is to separate the incarcerated in a brazen attempt to prevent them from speaking the truth.

The democratic space for protest has shrunk drastically in the country. Citizens have experienced this in brutal ways since 2019. Calculated destructions of democratic values and citizen’s rights take place at a frightening regularity. The way some of the followers of the ruling regime (including a BJP member who is a Supreme Court lawyer) ranted and raved against Muslims at Jantar Mantar on 9 August, in the media glare, is a case in point. They did so with impunity, and though some got arrested after much public pressure, they know nothing will eventually happen!

On the other hand, the State has strategically weaponised the criminal justice system to erode democratic space and harass and punish those who dare to protest anti-people and anti-Constitutional government decisions.

In this situation, if one looks to the Courts to protect fundamental rights, the entire judicial system seems to have failed the citizens. Between 2015 and 2019, 7,050 people got arrested in 5,128 UAPA cases, but the conviction rate was only 2.20%, according to data presented in the Lok Sabha in March. This experience is visible because in several cases, Bhima Koregaon, Delhi riots, intellectuals, students, trade unionists, lawyers, human rights defenders and activists have been incarcerated.

The axe of state repression always hangs dangerously over those who differ from or dissent from the state. Adivasis, Dalits, labourers, farmers, migrant workers—all who raise their voices know the state only as an entity that punishes peaceful and democratic attempts that challenge the status quo. The Muslims are particularly vulnerable.

Minorities are systematically targeted to create a false narrative of anti-patriotism, internal terrorism, and threat to the nation.

Also read: There is no Fringe in Hindutva, Yesterday’s Outliers are Mainstream Today

Dishearteningly, the courts have mostly acted conservatively. They are mostly reluctant to speak truth to power and restore justice. Earlier, the mainstream media allowed expression of protest and raised issues of injustice. Today, the media is the voice of the state, an important medium to popularise its narratives.

The large numbers of human rights activists, friends and supporters of all the people in jail under draconian laws have consistently and persistently campaigned for their release and against the use of draconian laws. Scores of people—journalists, human rights activists, trade unionists, cultural activists, comedians, environmentalists, students, farmers, industrial workers and minorities—are detained under repressive state laws, invoked to create a false narrative of internal terrorism and threat to the nation.

There are some rays of hope: some recent judgements and court orders have questioned the use of sedition law and the UAPA and reminded the prosecution of the detainees’ right to bail. Recent NIA court orders from Guwahati and the Delhi High Court (re: Akhil Gogoi, Asif Tanha, Devangana Kalita and Natasha Narwal) have offered devastating critiques of the UAPA. Such rulings are being regarded as a turning point in judicial circles. The mainstream press (which often qualifies as “godi” media) has taken note of this turn and broken with the narrative of the BJP government on these issues. These judgements vindicate, even defend, the right to dissent and opposition to the government.

Since 23 July, a National Campaign to Defend Democracy has started all over the country. Its first call was for “Justice for Father Stan Swamy” and brought hundreds of people from all walks of life together in public protests, demanding that the courts clear his name. On 28 July, the Jesuit Conference of India (JCI) observed a National Justice Day. The President of the Catholic Bishops Conference of India, Cardinal Oswald Gracias, endorsed this in a letter to the Church in India.

National Justice Day got an overwhelming response: Parishes, schools and other institutions brought together colleagues and supporters, staff and students, Sisters and other priests, parishioners and other sections of society to pay homage to Fr Stan and pledge to work for justice together so that his legacy carries on.

In most places, it was a silent assembly or procession. The participants lit candles and carried banners, posters and placards with pictures and quotes from Fr Stan. Due to COVID-19 restrictions, the gatherings were of limited strength and all manifestations were held on campuses or in halls. In some places, eminent persons spoke about Fr Stan and the need to work for justice, particularly for the Adivasis, Dalits, minorities and other disadvantaged sections.

There were prayer services with hymns and songs of unity. Some local media reported on the statement read at the end. On 3 August, the thirtieth day after Fr. Stan died, a memorial mass was held in Jamshedpur. His incisive memoir, “I am Not a Silent Spectator”, was released in Ranchi.

On 9 August, the National Campaign to Defend Democracy gained momentum when 165 movements, platforms and organisations representing thousands of citizens called for countrywide action to save democracy. It marked the international day for Indigenous people and the Quit India movement anniversary as a day of public action. The action will continue till 28 August.

A high point will be 15 August, Independence Day, when thousands will pledge to campaign to repeal draconian laws and protect our democracy. Several physical and virtual programmes are planned over the following weeks.

The signatories to the National Campaign said in a public statement, “State repression and attacks on right to dissent and the Constitution are growing. UAPA, NIA and other draconian laws are being used as instruments of repression. More than 165 organisations and civil society networks are undertaking a country wide action campaign (15-28 August) to protest against the institutional murder of Stan Swamy and the repression. As part of this campaign, programmes were organised across the country on 23 July to demand justice for Stan Swamy.

The campaign demands are:

2) Repeal of UAPA, sedition section and all other draconian laws, including state laws that allow preventive detention,

5) Accountability for filing false cases and compensation to victims,

Thousands are expected to sign a pledge on 15 August 2021. It reads as follows:

On the 75th Independence Day on 15th August, we pledge to defend the legacy of our Freedom Movement, the spirit of the Preamble and the values of our Constitution.

We pledge to campaign for repealing all draconian laws and assert the right to bail of every citizen.

We believe that the right to question and the Right to Dissent is the foundation of our democratic, secular and socialist republic.

We commit to campaign against all ideologies, laws, and state actions that deprive us of the freedoms of speech and opinion, conscience, association, and non-violent opposition.

There will be several online programmes in the coming weeks besides the physical programmes (where numbers will be limited because of the pandemic). All signatories (organisations and individuals) will be active on social media on dedicated pages/handles and from their own pages/handles, using the hashtags #FreeAllPoliticalPrisoners #JusticeForFatherStan #RepealUAPA #RestoreRightToBail #NoJailWithoutBail #DraconianLawsQuitIndia. Its dedicated email id is [email protected]

The National Alliance of People’s Movements (NAPM) has initiated a year-long nation-wide campaign, “Jan Azaadi 75: On the path to Freedom” focussed on remembering the values of the freedom struggle, re-asserting the contributions of people’s movements over 75 years and resolutely strengthen our collective struggle for democracy, human rights, social and ecological justice. The campaign will conclude on 15 August 2022.

At the start of the Quit India Movement, late on 8 August 1942, Mahatma Gandhi called on the nation to “Do or Die”. The next day, his words translated into concrete action and India, after much struggle, finally gained her freedom on 15 August 1947.

The current call to ‘defend democracy’ is in a similar vein: it is do or die for the people of India. In 1908, when Lokmanya Bal Gangadhar Tilak was being tried for sedition in the Bombay High Court, he courageously stated, ‘Swaraj is my birthright, and I shall have it’.

Justice Davar, the presiding judge, then asked him if he had anything to say before the sentence was pronounced, he audaciously replied, “All I wish to say is that in spite of the verdict of the jury, I maintain my innocence. There are higher powers that rule the destiny of men and nations. It may be the will of Providence that the cause I represent may prosper by suffering than by remaining free.”

These immortal and inspiring words of Tilak can be read even today. They are etched on a marble plaque outside Court Room 46 in the Bombay High Court. Tilak’s biographer NG Jog has described this historic moment profoundly, “These words delivered on the spur of the moment have a spontaneous dignity and almost a Socratic sublimity. They breathe the spirit of dedication to freedom and of defiance against the might of the British Raj. And, they could have been uttered by only one man in India’s contemporary history—Bal Gangadhar Tilak.” In 2021, in a fairly similar way, Fr Stan resonated the words of Tilak!

As we the people of India “celebrate’ yet another Independence Day, it is fitting to remind ourselves of that prophetic prayer of our Nobel laureate, Gurudev Rabindranath Tagore:

Where the mind is without fear and the head is held high;

Where knowledge is free;

Where the world has not been broken up into fragments by narrow domestic walls;

Where words come out from the depth of truth;

Where tireless striving stretches its arms towards perfection;

Where the clear stream of reason has not lost its way into the dreary desert sand of dead habit;

Into that heaven of freedom, my Father, let my country awake.

We need to internalise and act on Tagore’s call to “let my country awake” along with Gandhi’s “do or die” and Tilak’s “Swaraj is my birth right”. Above all, like the freedom fighters who gave us our independence, that at whatever the price, we must act NOW to defend democracy!

(Father Cedric Prakash is a human rights, reconciliation and peace activist and writer. The views expressed are personal.)