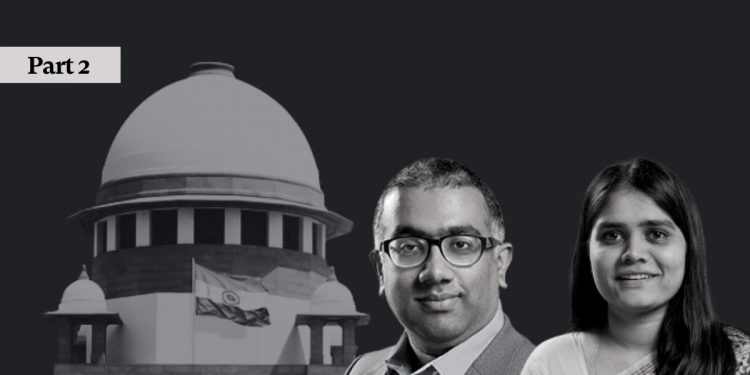 Is there a case for the National Judicial Infrastructure Corporation?

Prashant Reddy T, a lawyer and Chitrakshi Jain, a legal researcher, jointly authored two articles recently, “National Judicial Infrastructure Corporation: Ball in States’ not in Centre Court” and “Putting Justice in order: Accountability from Judges, not money or digital platforms will fix judicial system”.  The Leaflet’s Editor, V.VENKATESAN sought an interview with both on the many issues raised in these articles for the benefit of The Leaflet’s readers.  Here are The Leaflet’s detailed questions and their equally detailed answers sent to us through email.

PART I OF THE INTERVIEW CAN BE READ HERE.

TL: You have referred to how high courts have claimed the shield of judicial independence to escape public scrutiny of their functioning, and they don’t reveal documents as basic as financial audit reports, even under the RTI Act.  Is this a general impressionistic statement, or based on facts? Can you cite any instances?

Ans. While both of us were working at the Vidhi Centre for Legal Policy, we extensively studied the issue of judicial transparency from different perspectives. In the report titled, ‘Sunshine in the Courts: Ranking the High Courts on their compliance with the RTI Act’, which we co-authored, we document in detail the manner in which High Courts have grossly violated the RTI Act. Multiple High Courts have drafted their RTI Rules to create new grounds of rejection that go beyond Section 8 of the RTI Act. No other public authority in India has had the audacity to go beyond the permitted grounds of rejection in Section 8 of the RTI Act.

On the specific point of financial audit reports, we had filed applications under the RTI Act to all the High Courts seeking copies of their audit reports in 2019. Out of the 24 High Courts only 10 provided us with the copies. We covered this in a report that one of us co-authored while at the Vidhi Centre for Legal Policy – Back to Basics: A Call for Better Planning in the Judiciary. There are few other public authorities (like PM CARES) which behave in this manner. We believe this contemptuous attitude towards the RTI Act and transparency is a result of the judiciary mistaking ‘independence’ for ‘unaccountability’.

TL: You are also critical of the Chief Justice of India’s (CJI) proposal for the National Judicial Infrastructure Corporation (NJIC).  Why do you think centralisation here is unlikely to achieve its objectives?

Ans. To begin with, any new policy solution must identify the problem that it is seeking to solve. In this case, the CJI is not clear on the problem that the NJIC is going to solve. We need to see a white paper from the CJI explaining his case for the creation of this new behemoth called the NJIC. As of now, our only information is coming from leaks to the media. What exactly is centralisation going to solve, why would state governments (which spend on the creation of judicial infrastructure) give away money to the NJIC, and how is the CJI going to be accountable to all the state governments for the massive spending power that he is demanding? Finally, does Parliament have the power to force states to fund the NJIC?

“We need to see a white paper from the CJI explaining his case for the creation of this new behemoth called the NJIC.”

In the past, we have studied this issue of financing judicial infrastructure, and we know that it is a complex task which requires coordination between various departments of the state government including the district collectorate, the Public Works Department and the Finance Ministry; it also involves coordination between the state government and central government to complete the significant paperwork necessary to get funding under the centrally sponsored scheme.

Infrastructure projects inevitably include tedious processes such as procurement, tendering and auditing of building contracts. Do we really want judges to sit over the drafting of RFPs (Request For Proposals) and tenders, negotiate with state governments for land allotments and conduct site inspections to monitor the progress of building construction? Is that the best use of their time when the judiciary is creaking under the weight of an ever increasing backlog?

TL:  You are also critical of the all-India judicial examination for recruiting judges to district courts, although the Centre is in favour of it, and reportedly making preparations for introducing it.  Can you elaborate the reasons for your pessimism?

Ans. Like the NJIC, the idea for the AIJS (All India Judicial Service) is a solution looking for a problem. The last time this issue was studied in official circles was in a poorly researched report of the Law Commission in 1986. The Law Ministry, till now, has never issued a single white paper explaining the rationale for creating an AIJS.  While working at the Vidhi Centre for Legal Policy we published a primer on the topic. At the time the Law Minister claimed the AIJS would solve the problem of judicial vacancies. But as our study showed, vacancies are quite low in most states – it is a few poorly performing states like Uttar Pradesh and Bihar that were responsible for most of the vacancies in the country.

The Law Minister also claimed that the AIJS would increase representation for marginalised sections of society in the judiciary.  Again, our study showed that many states already provide a diverse range of reservation quotas for their state judicial services, including for ‘rural’ populations and for women.  Parliament does not provide reservation for women in any of the union services. States do a better job at ensuring representation of marginalised sections in the district judiciary.

“States do a better job at ensuring representation of marginalised sections in the district judiciary”.

On the other hand, there is severe opposition to the idea of the AIJS from several states, including Arunachal Pradesh, which is the home state of the current Law Minister. A chief concern for opponents of AIJS is about language – there have been several false equivalencies drawn in the press between the AIJS and the civil services – the IAS and the IPS – who are posted outside their home states and expected to pick up the local languages.  The key difference, however, between a bureaucrat of the All India Service and a judge is that the former is a management level cadre. An IAS or IPS officer needs to learn just enough of the local language to deal with the local bureaucrats. Judges, on the other hand, need to have a deep, almost native proficiency in the language of the people in that state because they deal directly with litigants during cross-examinations, remand hearings etc. A superficial understanding of the local language, picked up over a few months, won’t cut it.

Last but not the least, the Law Ministry has, to date, not explained the structure that will house the AIJS. Presently, High Courts and state governments jointly decide recruitment rules and conduct recruitments/appointments in coordination with each other. Once the AIJS is created, who is going to have this power? Is it going to be a central body? Do we, as a democracy, want to give this power to appoint all district judges in the country to one single body, which may then be controlled by one single political party? Are we not better off under the current mechanism where no single political party can influence the appointment of district judges across the country?

“Do we, as a democracy, want to give this power to appoint all district judges in the country to one single body, which may then be controlled by one single political party?”

TL:  You suggest institutionalising the joint conferences of CJs and CMs to be held regularly with a mechanism for implementing their resolutions.  Will it not lead to apprehension that it will compromise the principle of separation of powers, as the executive is the largest litigant before the courts? You also suggest enactment of a new High Courts Act to create transparent and accountable mechanisms for coordination between the state governments, bar councils and high courts on issues pertaining to judicial administration.  Will such an Act succeed where the Supreme Court has failed to deliver?

Ans. We never suggested institutionalising joint conferences – our suggestion is for a model High Court Act. There is currently no institutional mechanism for the judiciary and executive to sit across the table and discuss their issues in a transparent manner. As a result, some High Court judges lose their patience and take up the issue on the judicial side, which is not the way to negotiate with the executive. Elected governments have to balance a million different priorities ranging from welfare schemes to regular administration. They cannot be expected to prioritise judicial spending over all other categories, and judges cannot demand special treatment by abusing their judicial powers.

A law which creates new administrative structures for co-ordination between the judiciary and the executive, while ensuring full transparency will hopefully lead to more efficient outcomes. As for the question of independence, the fact that High Courts cannot be censured or removed by state governments is more than enough of a guarantee for ensuring their independence.