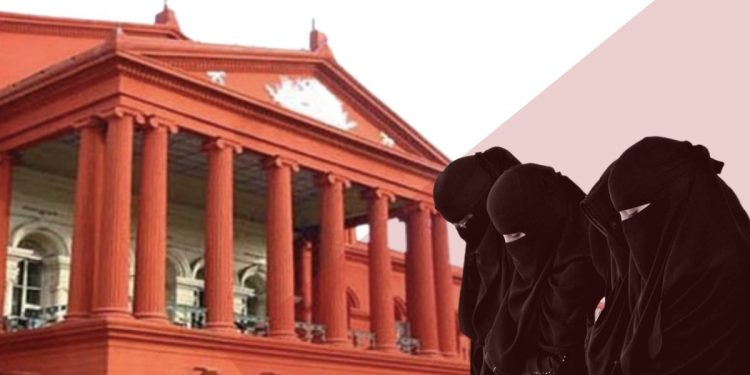 THE Karnataka High Court on Tuesday heard submissions on behalf of the petitioners challenging the hijab ban enforced in educational institutions across the state.

Appearing for a batch of Muslim women who were denied entry to their educational institution on the ground that their wearing a burqa offended the notification issued by the authorities, Kamat submitted that the order was unconstitutional, without authority of law and was liable to be set aside.

Kamat submitted that the various judgements cited in the impugned order to support the claim that wearing a hijab is not an essential practice in Islam were not applicable and were distinguishable on facts. He submitted that in one of these cases, the Hijab ban was upheld as it was an all-girls school and there is no requirement in Islam to wear a hijab around other women. He submitted that Islam only mandates wearing a hijab for women around men who are not immediate family.

He further submitted that the wearing of hijab was an essential practice in Islam and buttressed his claim with extracts from the Quran. He also placed reliance on various judgements of the Supreme Court and other High Courts. Kamat further submitted that the turban and kirpan for Sikhs have been recognized as an essential religious practice and that wearing of a hijab for Muslim women is a similarly placed right.

Kamat submitted that denial of entry to students who wore a hijab was a violation of their rights under Article 25 of the Constitution. In this regard, he relied upon the Supreme Court’s judgment in Bijoe Emmanuel case of 1986, in which the court had held that to compel each and every student to join in the singing of the National Anthem despite his/her genuine concern that it would violate their religious belief, clearly breaching the rights guaranteed by Articles 19(1)(a) and Article 25(1) of the Constitution of India.

Kamat also submitted that the order was opposed to the secular spirit of the Constitution. He submitted that secularism is a basic structure of the constitution, and relied on the Supreme Court’s judgment in S. R. Bommai vs. Union of India (1994) case to buttress his submission.

Kamat also argued that India, unlike many other countries, did not follow the principle of negative secularism. He argued that India followed the principle of positive secularism which meant that all religions are considered true and equal, and accordingly they may all be equally followed. He submitted that keeping this in mind, the State should refrain from infringing a citizen’s right to freely practice the basic tenets of their religion.

The Advocate General took objection to this statement and submitted that such statements could have far reaching consequences when it comes to law and order and public safety.

Kamat replied that he was making submissions based on his affidavit and that he, as an advocate, had a right to freely argue before a court of law without fear.

Kamat argued that the Hijab ban was violative of Article 19(1)(a) of the Constitution as the freedom of speech and expression included the freedom to dress in one’s own way. He buttressed this argument by relying on the Supreme Court’s judgment in NALSA vs. Union of India (2014).

He further argued that the right to wear a hijab flows out of the right to privacy, which has been recognized as an essential facet of Article 21 of the Constitution by the Supreme Court in Justice K.S.Puttaswamy (Retd.) vs. Union of India (2017).

He concluded his arguments by submitting that the Karnataka Education Act did not empower the state or other education authorities to issue notifications regulating uniforms and dress code.

Kamat prayed that the students be allowed to attend school without having to comply with the ban on hijab till the pendency of the proceedings and subject to the final outcome.

The Advocate General submitted that even though the matter had reached court, some citizens were protesting and causing havoc. He prayed that the court pass an order banning any protest or demonstrations with regard to the subject matter of the present proceedings. He cited the order of the Supreme Court passed by a bench led by Justice A.M. Khanwilkar in the farm laws protests case in support of  his prayer.

The court did not pass any order based on the Advocate General’s plea.

The single-judge bench, consisting of Justice Dixit, passed an order stating that the court had full faith in the wisdom of the public at large and that the same could be put into practice by the people to ensure that law and order is maintained.

The bench will continue hearing this matter on Thursday when the Advocate General is expected to make submissions on behalf of the State.