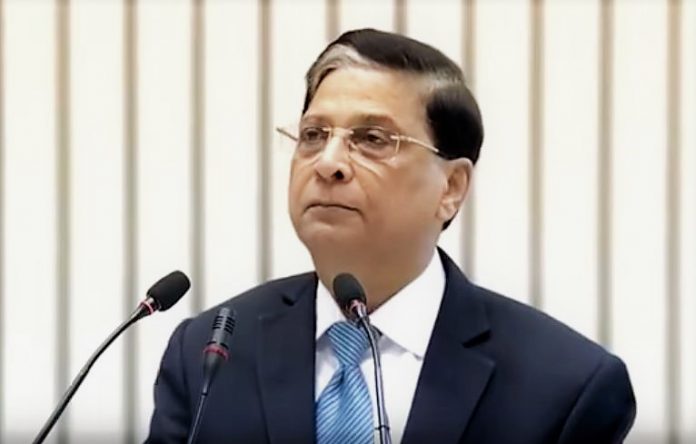 Rajya Sabha Members belonging to seven political parties have signed the notice for initiating impeachment proceedings against Chief Justice of India Dipak Misra. Rajya Sabha Opposition leader Mr. Ghulam Nabi Azad confirmed the same at a press conference held by him yesterday. In the history of independent India, it is for the first time that a Chief Justice of India is sought to be impeached by the Parliamentarians.

Clause (4) of Article 124 of the Constitution of India reads as follows:

“A Judge of the Supreme Court shall not be removed from his office except by an order of the President passed after an address by each House of Parliament supported by a majority of the total membership of that House and by a majority of not less than two-thirds of the members of that House present and voting has been presented to the President in the same session for such removal on the ground of proved misbehaviour or incapacity.”

Article 218 provides for the applicability of Article 124(4) & (5) on the judges of the High Court. Under the Judges Inquiry Act of 1968, a notice for presenting an address to the President for removing a judge has to be signed by 100 members of the Lok Sabha and submitted to the Speaker. A similar notice can also be signed by 50 members of the Rajya Sabha and submitted to the Chairperson of the House. If the Speaker or the Chairperson admits the motion, he or she must appoint a three-member committee comprising the CJI or a sitting judge of the Supreme Court, a sitting Chief Justice of a High Court and an eminent jurist. The committee then takes over and investigates the charges of misbehaviour against the judge. It is only once this committee finds the judge guilty of any charge that either house can pursue the motion.

The motion at the end mentions that the above-mentioned charges against the Chief Justice of India, have brought the judiciary into disrepute  and there is sufficient prima facie evidence for initiation of impeachment proceedings against Mr. Chief Justice Dipak Misra.

It will be interesting to see whether the Chairperson of the Rajya Sabha will be admitting the motion thereby causing constitution of three-member inquiry committee to inquire into the charges referred in the impeachment motion or he will choose to reject the same.

Read the full text of the motion here.