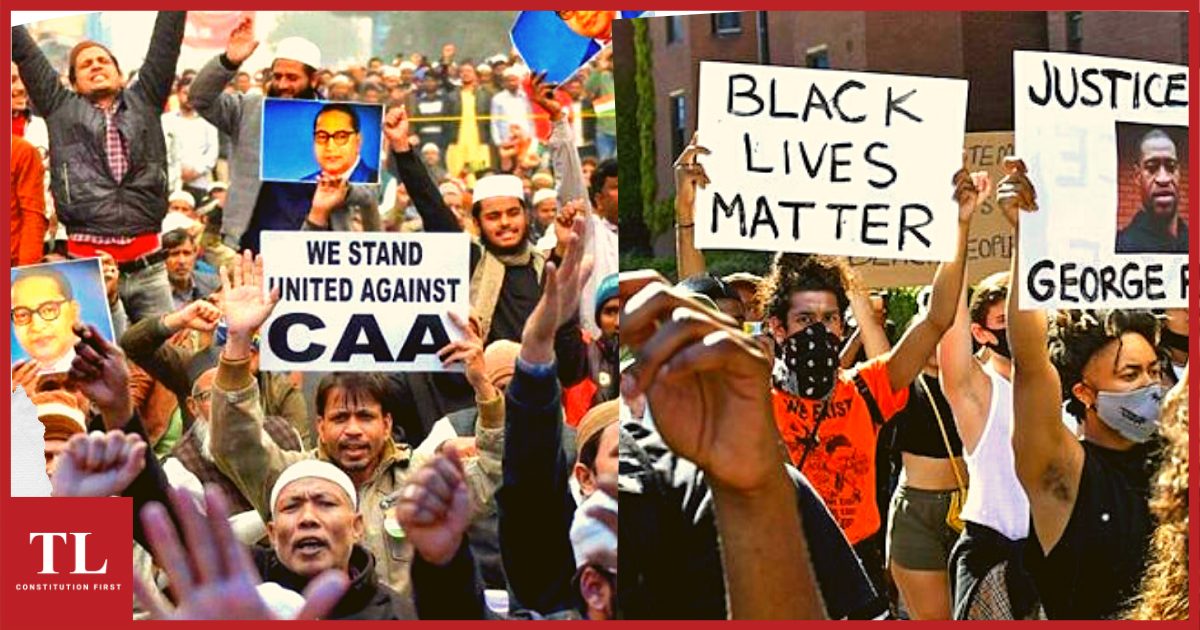 If Racism Persists in America, What is India’s Malaise?

Decades after the civil rights movement and the constitutional guarantee of equality, why are members of the Black community treated as second-class citizens in America? ANANT PRAKASH MISHRA writes about the ongoing battle against race in America, and the religion-centric CAA-NRC-NPR debate in India.

WITH the recent conviction of Derek Chauvin, the United States is deep in introspection again. Chauvin is the police officer who kneeled on the neck of George Floyd for more than eight minutes in broad daylight while the public stood helpless, watching. It was not just one more custodial death or ignominious instance of police brutality. It was far more grave. It reflected the deep-rooted animus and persistent hate towards the Black community in the United States.

For a nation that takes pride in its constitutional heritage, the killing of George Floyd is a scar that reminds us that the war against racism is still not over in America.

The fight and the cry for equality date back to 1857 when the American Supreme Court decided Dred Scott vs Sandford. In an infamous 7-2 verdict, the court ruled that the word “citizen” in the US Constitution did not intend to include the Black people. At the time, the United States was in a conundrum and passing through a phase of internal conflict concerning the question of slavery.

Note that the original Constitution did not abolish slavery in America. Many who framed it were slave-owners. It was not until 1865 that the abhorrent practice was abolished. Thus, when Dred Scott tried to purchase his freedom, his citizenship claim was denied by the Supreme Court.

Justice Roger Tanny, who delivered the majority opinion, held that Black people were, “at that time of America’s founding considered as a subordinate and inferior class of beings who had been subjugated by the dominant race, and, whether emancipated or not, yet remained subject to their authority, and had no rights or privileges but such as those who held the power and the Government might choose to grant them”.

The Dred Scott judgement attracted criticism and ignited a debate on American citizenship laws. The denial of citizenship on grounds of race was later overturned and explicit safeguards were introduced in the Fourteenth Amendment to the US Constitution.

In 1964, nearly a hundred years after slavery ended, Martin Luther King Jr. was awarded the Nobel Peace Prize for his relentless non-violent struggle against institutionalised racial discrimination in America. At this stage, the American Supreme Court under Chief Justice Earl Warren gave some landmark judgements that were crucial steps that furthered racial equality; e.g., Brown vs Board (1954), Loving vs Virginia (1967), and others.

While attempts were being made to bridge the gap and to end the long-standing blemish of racial inequality, the existence of white supremacist organisations such as the Ku Klux Klan (KKK) made it increasingly difficult. Unfortunately, the tremors of racial hate are felt even today, and it is a humanitarian crisis that should concern all.

A Different but Worrying Situation in India

The BJP government wants to implement the CAA-NRC-NPR nationwide. The controversial Citizenship Amendment Act, 2019, makes religion a factor in determining citizenship. It has resulted in the exclusion of Muslim immigrants.

Just like in the US, the debate on citizenship in India is charged. Not just today, it was a hot-button issue even in the Constituent Assembly. The complexities grew when the question of religion came into the picture.

Also read: CAA-NRC-NPR: Everything We Need to Know

In the Constituent Assembly, there was an attempt to pursue an amendment in the original draft of the citizenship provisions (Part II, Articles 5 to 11). PS Deshmukh proposed to make religion a significant fact to determine Indian citizenship. He wanted that Hindus and Sikhs living anywhere in the world should have the right to Indian citizenship. The idea was categorically and explicitly rejected (on vote) by the Assembly.

The Constituent Assembly rejected citizenship along religious lines. They made it clear that India would not tread on the lines of a theocratic state in any way.

The CAA, therefore, violates secularism, which is part of the basic structure of the Constitution. Through this law, the Indian state is pursuing a politics of divisiveness and extreme polarisation. When constitutional principles are diluted, it must raise questions and suspicions across the nation. We must dissent against such manipulation of the Constitution.

Inertia in America and Way Ahead

A majoritarian mindset contravenes the core principles of meaningful democracy. The first right that democracy gives citizens (and residents) is their voice, that is, their right to representation. India is combating majoritarianism and the United States, too, is struggling with it. The Republican opposition to granting full statehood to DC is one more instance worth examining in this context.

A bill has been introduced to make Washington DC the fifty-first state of the US, named Washington, Douglass Commonwealth. The bill has passed in the House of Representatives but will likely face stiff resistance in the Senate.

Also read: The fight for DC statehood gets its best chance yet

The seven lakh people of DC are taxed every year without any representation, and the argument is that statehood will give them the two senators that every state is entitled to. The net taxes paid in DC exceeds that of 21 states. Its population is higher than that of Wyoming or Vermont.

The right to full statehood of DC is also an issue concerning civil rights because around 46% of its residents are Black. The majority of DC is non-white, which indeed makes it a fight for the right to representation.

Although it is impossible to undo years of injustice and trauma, giving the fundamental right to representation is a good starting point for equality of the oppressed and the minorities. All countries must strive to make the political process inclusive enough to secure purposeful participation by all.

The fight for social justice is a fight to save humanity. So, this is not a country-specific issue: Oppression can take place anywhere and in any form. Martin Luther Jr. said, “Injustice anywhere is a threat to justice everywhere”, and so it is a collective duty to make the world a better place.

(Anant Prakash Mishra is a student of law at the WB National University of Juridical Sciences, Kolkata. The views expressed are personal.)