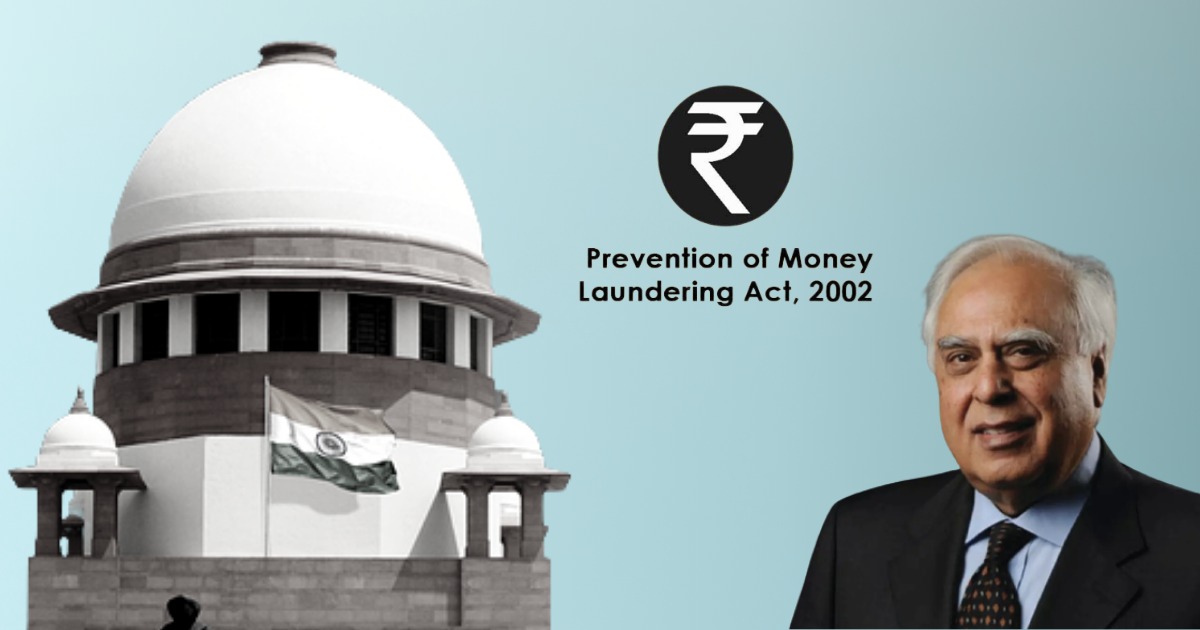 How PMLA lost its procedural fairness, counsel explains to the Supreme Court

SENIOR advocate Kapil Sibal, on Wednesday, told the three-judge bench of the Supreme Court comprising Justices A.M. Khanwilkar, Dinesh Maheshwari and C.T. Ravikumar, that the Prevention of Money Laundering Act [PMLA], 2002 has created a Frankenstein’s monster. Calling it a “Belagam Ghoda” (unbridled horse), Sibal said there are no procedural restraints provided for the exercise of powers by the Directorate of Enforcement [ED] under this Act.

The submission was made by Sibal in Vijay Madanlal Choudhary vs. Union of India, a case concerning the interpretation of the provisions of the PMLA and the procedure followed by the ED while investigating offences under the Act. The ED records an internal document called the Enforcement Case Information Report [ECIR] without informing the accused of its contents, and the acts for which he is being investigated.

The main concern, in this case, is over how the ED, despite having powers of investigation, has not been classified as a ‘police agency’. Other investigative bodies like the Serious Fraud Investigation Office [SFIO] and the Directorate of Revenue Intelligence [DRI] – dealing with economic offences under other legislation – too are not bound by the procedural safeguards in favour of the accused prescribed under the Criminal Procedure Code [CrPC]. Nearly 200 petitioners have challenged the powers of these agencies, out of which more than 80 deal with the PMLA.

Since the ED is not deemed as a police agency, statements of the accused in the course of an investigation can be used against them in judicial proceedings, contrary to the fundamental right to self-incrimination, guaranteed by Article 20(3) of the Indian Constitution.

On Wednesday, Sibal, appearing for one of the petitioners, submitted that the investigation under the PMLA could only proceed if proceeds of crime are projected or claimed as untainted property.

Sibal argued that the extent of proceeds of crime projected or claimed to be untainted property must at least be prima facie quantified to ensure that the thresholds prescribed under the PMLA are met.

He submitted that what was sought to be criminalized as the offence of money laundering was not the mere acquisition, use or possession of proceeds of crime, but its ‘conversion’ or ‘transfer’ for the purpose of either ‘concealing, or disguising the illicit origin of the property’ or of assisting any person who has been involved in the commission of the predicate offence to “evade the legal consequences of his action”.

Sibal argued that the ED is required to record that the offence of money laundering stands prima facie committed for which the accused is liable to be prosecuted. The ECIR therefore must disclose the ‘proceeds of crime’ as well as the act of projecting or claiming such proceeds of crime as untainted property.

Sibal said PMLA originally contained the safeguard of filing of a charge sheet under Section 173 of the CrPC before any investigation could be carried out under it. He submitted that the power of provisional attachment of property under Section 5 PMLA (in the unamended PMLA 2002) and the power of search and seizure under Section 17 PMLA (in unamended PMLA 2002) could be exercised only after a chargesheet under section 173 CrPC had been filed in relation to the alleged scheduled offence. However, these safeguards have been diluted over time by way of amendments to the PMLA, he said.

Sibal submitted that though there is no threshold to issue summons under Section 50 of PMLA, it must be read into it, i.e. a person can be summoned under section 50 only after registration of ECIR and supply of its copy, which in turn can only be done after chargesheet or complaint has been filed in respect of the predicate offence.

Sibal submitted that when the ED registers an ECIR, it treats itself as an exception to the principles and practices which are ordinarily followed in the case of the registration of the FIR. He added that the ED claims ECIR to be an internal document and does not make it available to the persons named in the ECIR through any procedure, but it begins issuing summons to accused persons and seeks details of all financial transactions of the accused and their family members.

“The accused is called upon to make statements under S. 50, PMLA which are treated as admissible in evidence. Throughout this procedure, the accused does not even know the allegation against him, as the only document which contains the allegation is the ECIR, which is not supplied to the accused persons”, Sibal contended.

Sibal submitted that several of the safeguards of the CrPC are not being complied with by the ED in any of its investigations. For instance, he cited:

Section 50 of PMLA is not meant for accused and witnesses

Referring to Section 25 of the Indian Evidence Act, Sibal said it states that no confession made to a police officer, shall be proved as against a person accused of any offence. Sibal cited the 185th Law Commission Report, 2003 which was tasked with carrying out a comprehensive review of the Indian Evidence Act. The report had dealt extensively with the legislative history of section 25. It had inter alia recorded that “the evidence of the Parliamentary Committee on Indian Affairs showed gross abuse of powers by the police officers in India leading to oppression or extortion”. Sibal submitted that this protection was later incorporated into the Indian Evidence Act, again keeping in mind that the purpose for the same was to protect persons from the apprehension that a police officer who has large powers over the accused persons may unwillingly extort false confessions.

It was thus contended by Sibal that under the current scheme of the PMLA, an officer of the ED can legally require the accused to sign a confessional statement, failing which he may be prosecuted under Section 63(2)(a)-(b). He emphasised that statements under section 50 PMLA are also regularly recorded by officers of the Enforcement Directorate when persons are in the custody of the Enforcement Directorate or in judicial custody.

Sibal cited the decision of the Supreme Court in Selvi vs. State of Karnataka (2010) to highlight the importance of the statutory safeguards in the CrPC and the Indian Evidence Act, which constitute the procedure established by law in line with the fundamental right under Article 20(3), which is interlinked intrinsically with the right to a fair trial under Article 21. In the Selvi case, the Court held “it must be reiterated that Indian law incorporates the “rule against adverse inferences from silence” which is operative at the trial stage. As mentioned earlier, this position is embodied in a conjunctive reading of Article 20(3) of the Constitution and Sections 161(2), 313(3) and proviso (b) of Section 315(1) CrPC.”.

Further elaborating his arguments, Sibal referred to section 313 of the CrPC (Power to examine the accused.) As per this section, even the Court cannot compel the accused to answer its questions under threat of sanction or under oath.

These safeguards as provided under the CrPC, and the Evidence Act, Sibal argued, in protecting the right of the accused person under Articles 20(3) and 21 of the Constitution, constitute the procedure established by law as far as testimonial compulsion of an accused person is concerned. He added the validity of the section 50, PMLA thus needs to be examined in light of constitutional safeguards under Article 20(3) and Article 21, as operationalized by the legislature under various statutory provisions including sections 161, 162, 313 and 315 of CrPC, and sections 25 and 26 of the Indian Evidence Act.

The test that the Court should consider while determining the vires of section 50, PMLA is whether by exercising the powers under section 50, the officer is in a position to compel a person to render a confession, give incriminating statements against himself, under threat of legal sanction/imprisonment and arrest by the ED, Sibal submitted.

He submitted the PMLA defines and creates a new offence i.e. the offence of money- laundering and provides for punishment. The PMLA also vests powers of search and seizure, arrest, issuance of Letters Rogatory, and so on, on the officers under the Act for carrying out the investigation. For the trial of offence of money laundering, the PMLA provides for the constitution of new Special Courts and provides that the procedure to be followed shall be the procedure prescribed under the CrPC. By virtue of Section 65 of PMLA, all provisions of CrPC, except insofar as they are inconsistent with the provisions under the PMLA, are made applicable to the PMLA.

Sibal submitted that the determination of whether an officer under a special statute such as PMLA is a police officer or not will depend on – (i) the object/ purpose of such special statute; and (ii) the nature of powers exercised by such officer. Elaborating it further, Sibal submitted that if the purpose/ object of the special statute is the prevention and detection of a crime, and in order to achieve such object, an officer under such special statute is vested with coercive powers (such as arrest, taking remand in custody of the arrested person, search of property and person and seizure, etc.) which would facilitate the obtaining of a confession from a suspect, then such officer will be a police officer for the purposes of section 25 and 26 of the Indian Evidence Act, and any confession made to such officer will be inadmissible in evidence.

Sibal relied upon the numerous decisions of the Supreme Court in which the said test was developed by way of judicial precedents over the years.

Sibal thus submitted that in the PMLA, the coercive powers which are provided, including the power of arrest under Section 19 without a warrant on a mere subjective satisfaction of the officer concerned, in fact facilitate obtaining of a confession. In addition, the power of recording of statements under section 50(2) and (3), PMLA is for the purposes of ‘investigation’, which, as per the Supreme Court’s decision of Toofan Singh (2020), establishes a direct relationship with the prohibition in Section 25 of the Evidence Act.