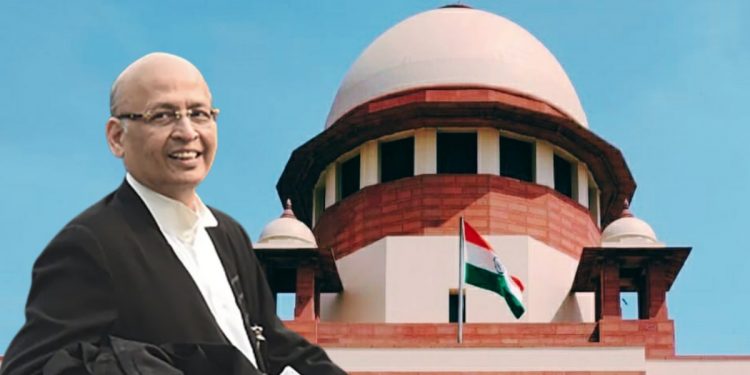 How PMLA enables complete inversion of burden of proof, counsel explains to the Supreme Court

A three-judge Supreme Court bench comprising Justices A.M. Khanwilkar, Dinesh Maheswari and C.T. Ravikumar, on Tuesday, resumed hearing on a batch of petitions concerning the interpretation of the provisions of the Prevention of Money Laundering Act [PMLA], 2002.
Senior Advocate Dr. Abhishek Manu Singhvi made elaborate arguments attacking the validity of Sections 24 (burden of proof), 17 and 18 (search and seizure), 5 (attachment of property involved in money laundering), 8 (adjudication) and 45 (bail) of the PMLA.

Presumption of the commission of offence
Singhvi submitted that the reading of section 24(a) shows that a presumption is raised in relation to the fact of money laundering, that is, the fact of projecting the proceeds of crime as legitimate. He contended that the way presumption is structured in section 24, the commission of offence is itself presumed. He thus submitted that such a presumption runs contrary to the principles of criminal jurisprudence and fundamental rights guaranteed to every person under Articles 14, 19 and 21 of the Constitution.

Singhvi added that prior to the 2013 amendment of PMLA, a blanket presumption would apply against an accused even before the framing of the charges against him. He added that after the amendment, there is no requirement for the prosecution to prove any facts in relation to the trial after the charges are framed.

“The entire burden of disproving the case as set out in the complaint would rest with the accused person, after the framing of charges. This amounts to a complete inversion of the burden of proof”, Singhvi argued.

Singhvi submitted that the Prevention of Corruption Act and the Narcotic Drugs and Psychotropic Substances Act dilute the burden of proof in favour of the prosecution, but none of them constitutes as complete an inversion of this burden as does section 24, PMLA. He contended that even in the cases of reverse burden, the main ingredients of the offence are required to be proved first by the prosecution before the presumption can be raised against an accused.

“In the absence of such safeguards, such a presumption will be violative of Article 14 and 21 of the Constitution being a violation of the right to a fair trial and the presumption of innocence”, he submitted.

Attacking section 24, Singhvi argued that any authority or court under this Section ‘may’ presume that proceeds of crime are involved in money laundering against a person not charged with an offence of money laundering. This, he argued, not only eliminates the safeguards of section 24(a), but also provides no guidance on when such court can invoke this presumption, whether at the stage of trial or prior.
Explaining the absurdity of section 24(b), Singhvi argued that ‘authority’ appearing in section 24 also refers to the officers of the Enforcement Directorate [ED]. This, he said, is in contradistinction to the Adjudicating Authority defined under Section 2(1)(a) of PMLA.

“The two terms are also used distinctly under the PMLA. Section 24, therefore, allows an authority investigating an offence to presume the commission of an offence, which is absurd and cannot be countenanced”, he contended. He added that ED has been regularly invoking the presumption under section 24 even before it files a complaint before the Special Court, such as in attachment proceedings filed before the Adjudicating Authority.

Singhvi thus urged the Court to strike down section 24 insofar as it places the entire burden of proof to disprove the essential ingredient of money laundering on the accused person. In the alternative, he suggested to the Court that it needs to interpret section 24 of PMLA to read a requirement of proving certain foundational facts relating to the essential ingredient of projecting and converting tainted property as untainted property into section 24.

No safeguards for search and seizure

With regard to sections 17 and 18 of PMLA which confer power on the officers of the ED to carry out search and seizure, Singhvi submitted that these sections do not contain any safeguards, and thus ED can conduct search and seizures even in the absence of an FIR [first information report] being registered by the police in case of cognizable offences or a complaint being filed by designated officers in cases of special statutes such as the Customs Act before a competent court.

Singhvi argued that originally PMLA allowed for the search and seizure to be conducted after filing a chargesheet or a complaint in the predicate offence. This protection was partially diluted by its 2009 amendment. However, in 2019, by way of the Finance Act, 2019, the safeguards were completely removed. He submitted that the effect of the 2019 amendment is that it allows the ED to conduct searches and seizures without any investigation being carried out in the predicate offence, in some cases even without an FIR being registered. There is no statutory provision for registration of an FIR being a prerequisite for the registration of an Enforcement Case Information Report. The complete omission of the safeguards can now allow the ED to search premises or persons even without an FIR being filed.
Proceeds of crime
Attacking the validity of section 5 of PMLA that confers power on the ED to attach the property involved in money laundering, Singhvi argued that the second proviso to Section 5 is ultra vires to the main section to the extent it allows attachment independent of the existence of a predicate offence and of property which may not be the proceeds of crime. His argument is that property which is not temporally connected with the proceeds of crime cannot be attached.

Singhvi submitted that though a safeguard in the form of the first proviso has been provided to ensure that the drastic step of attachment is taken only after a view relating to the commission of the predicate offence in the form of chargesheet has been formed, the second proviso not only allows attachment without a chargesheet, but also allows the attachment of any property or any person.
“Thus, the link with the schedule of offence and proceeds of crime has been completely removed”, he argued. He added this also delinks the attachment provisions from the essential requirements of projecting the proceeds of crime as untainted property.

He thus argued that if the second proviso is read in a way to delink it from the proceeds of crime relating to a specific scheduled offence, the same would not only be violative of Articles 14, 19, 21 and 300A of the Constitution but also would violate the rule that a statute cannot travel beyond the scope of the main section.

“The objective of the attachment provisions being to prevent the alienation of the property pending the trial, the effective confiscation of the attached property in the form of taking possession under section 8(4), even before any proceedings have commenced before any Court is disproportionate to the state interest sought to be protected and ought to be struck down as unconstitutional”, Singhvi submitted.
“This could even lead to a situation where the ED uses the very same shares to vote against the owner of the shares. Such a situation could have grave implications for the operation of corporations”, Singhvi submitted.

Accused cannot show he is not guilty at bail stage

Leading the charge against the validity of section 45(1) of PMLA, Singhvi argued that it reverses the presumption of innocence at the stage of bail and thus is unconstitutional, being violative of Article 21. He argued that an accused person can never show that he is not guilty at the stage of bail since the entire material is not handed over to him till the stage of charge, post the filing of the complaint. He thus contended that the restrictive conditions for bail are disproportionate, excessive, and unconstitutional. In Nikesh Tarachand Shah vs. Union of India (2017), the Supreme Court had struck down the twin conditions for the grant of the bail under PMLA.

Singhvi argued the amendment to the PMLA by way of the Finance Act in 2018 did not remove the invalidity of section 45(1), PMLA as declared in Nikesh Tarachand Shah. In any case, Singhvi argued that the twin conditions under the PMLA should only be restricted to cases where the predicate offence also stipulates the twin conditions for grant of bail under those Acts.
He submitted the Supreme Court in Nikesh Tarachand Shah struck down section 45(1) of PMLA not only on the ground sought to be cured by the legislature but also on the ground that it was in violation of Article 21 of the Constitution by virtue of the nature of the offence under the PMLA itself. This basis for the judgment of this Hon’ble Court has not been cured by the legislature and section 45(1), PMLA cannot be said to have been revived.

Singhvi will continue to argue on the validity of section 45 on Tuesday.