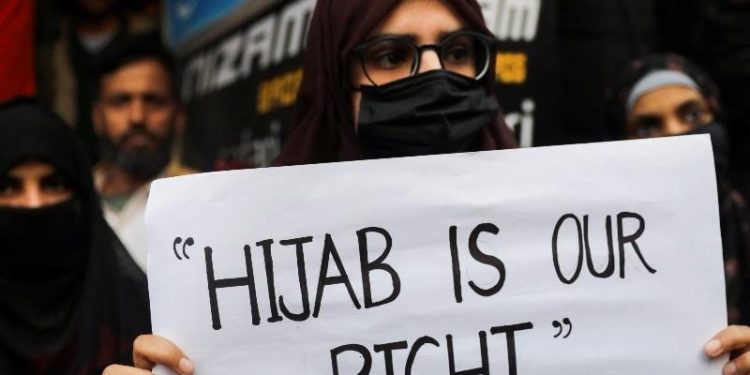 Hijab is Just an Excuse, Karnataka Fuss is About Making India Saffron

IN 1935, when Nazism was on the ascendant in Europe, Poland added ‘getto lawkowe’ or ghetto benches to the official lexicon. It began to segregate Jewish university students, who were told to sit away from other students or face expulsion. The exclusion began with just one institute, then spread slowly to other higher education institutions. The rest, as we know, is a tragic history.

Thus it is unfortunate that recent events in Kundapur, a small town in Udupi, Karnataka, remind of those events. One fine morning, Muslim girls of the town were denied entry into their schools if they were wearing the hijab or headscarf. Bolstering the exclusion of their fellow students were members of the majority community, mostly men but also women, who marched on the streets wearing saffron scarves, claiming it as a ‘religious right’. Reports say members of the ruling party condoned the behaviour of the saffron vigilantes targeting Muslim girl students. This attempt to deny minority students access to their schools has spread to other parts of the state.
Earlier, in a mischievous order, the state government instructed students to not “wear clothes that disturb law and order”. Then, instead of resorting to the position before the controversy, a three-judge Karnataka High Court bench restrained students from wearing “religious clothing till further orders”. This order created a mayhem-like situation, with school managers demanding students and teachers either take off their hijab before entering or leave the premises. There were disturbing visuals and reports of girls being turned away from schools they had attended for years.
The government order is being challenged in the High Court on the ground that it amounts to denying education and depriving the girls of their right to dress as they wish. The petitioners say the order creates disaffection and uses adolescents of impressionable age.

The argument is that India’s Constitution provides for positive secularism. In other words, “…our secularism ensures that everyone’s religious rights are preserved.”

Whatever the outcome, this controversy is just another one that pushes India towards saffronisation of polity and society.

Recently, civil liberty and democratic rights organisations published a detailed report on Dakshin Karnataka, where Udupi is located, which detailed the many ways the Hindutva supremacists, aided and abetted by the ruling establishment, are pursuing saffronisation. The report highlights the strategy that underlies the repeated incidents of communal violence.

First off, opposition to the hijab was raked up by saffron vigilantes, who then falsely projected it as the ‘hijab controversy’. The terminology stigmatises and isolates the victims of the saffron crowd, while sanitising their crimes and eliminating any reference to their puppet masters in power.

Imagine Zionists targeting hapless Palestinians in Israel in connivance with the government or Islamist fanatics unleashing a reign of terror on minorities in say, Pakistan. Would such acts be called ‘Palestinian controversy’ and ‘minority controversy’ respectively, or would they get condemned for what they are: ‘Zionist attacks’ and ‘Islamists attacks’? So, why should not the current discussion be called by its name ‘saffron vigilantism’?

Hindutva supremacist forces have fanned the controversy in Karnataka while five states conduct Assembly elections. It is an attempt to show Muslims their place in ‘New India’.

The issue hit national headlines, sending a message that the days of Sarv Dharm Sambhav are over; India has decisively entered the phase of Hindu Rashtra, wherein minorities live on the sufferance of the majority or “thanks to the kindness and generosity of Hindus”.

If Gandhi, Nehru, Patel, Ambedkar and Maulana Azad envisaged independent India as a nation of equals, New India was envisaged by Golwalkar’s notions of one India with one culture. It is no coincidence that KS Eshwarappa, a senior minister in the SR Bommai government, told the media that India would have a saffron flag instead of the Tricolour in the future.
A common thread runs through the newly raked up ‘saffron controversy’ and the recent Sulli/Bulli Bai episodes. If the ‘auctioning’ of Muslim women signified an attempt to make them pay the price for being successful and assertive, the school hijab ban is the first payment being extorted from them. Denying quality education in government schools will nullify any chances of assertion on the part of Muslim women, for anxious parents may pull their girls out of schools. There has been a steady uptick in Muslim girls going to schools. So, this controversy could end in disaster for the girls, their families and the country.

Now is the time to ask the Karnataka government to do some soul searching about how it behaves towards students of “other” religions. If it is keen to ban hijabs, has it considered banning Hindu students wearing tilaks or wearing maulis, or Sikh students’ pagdis? Has it considered what will happen when festivals of any religion—Diwali, Dusshera, Holi, Christmas, etc., roll around? Has it decided that the Saraswati Vandana, which is recited in many schools (thanks also to Hindutva groups’ insistence on it), would no longer be held?

The most troubling aspect of the Karnataka saffron controversy is the silence of most Hindus. How do they perceive this targetted ban of the hijab while open espousal of their religious markers and festivals inside the school campus continues? Have they thought over how the rising bigotry will hurt them, too, in the long run? Hindutva supremacists want to usher in a Hindu Rashtra, based on their belief that their religion is integral to Indian culture, whereas ‘other’ religions have no place in it.
This unfolding controversy has also led to a counter-mobilisation by radical Muslim outfits. Instead of sticking to secular aspects of the issue, these groups focus on their interpretation of its religious aspects alone. In this lie the lessons we must learn about how radicalisms feed off each other, and how society must stop in to control them.

The author is a freelance journalist. The views are personal.