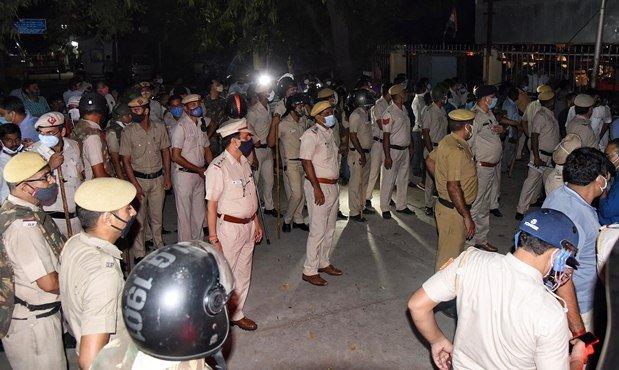 [Part1] Hathras Rape Case: Grappling with the Ground Realities of the Implementation of SC/ST Prevention of Atrocities Act

As lakhs of people take to the streets to demand justice for Manisha Valmiki, and the many other Dalit women who face unspeakable atrocities, discussions around caste and criminal justice are gaining traction. Legal experts from CENTRE FOR SOCIAL JUSTICE (CSJ) shed light on some critical challenges faced by grassroots lawyers in using the Scheduled Castes and the Scheduled Tribes (Prevention of Atrocities) Act, 1989 to safeguard justice for victims.

This report is the result of a larger study on the implementation of the Act in Chhattisgarh (Kanooni Margdarshan Kendra 2019) conducted by CSJ. While the findings are based on experiences from Chhattisgarh, they speak to a larger failure of the State machinery to protect its most vulnerable and to bring oppressors to justice.

THE brutal caste-based gang rape and murder of Manisha Valmiki, a 19 year old Dalit woman, by a group of Thakur men in Hathras has shocked the nation.

The covert immolation of Manisha’s body in the dead of the night and the blatant lawlessness with which the Uttar Pradesh Government is denying charges of rape, has brought state response to atrocity cases into sharp focus.

According to the National Crime Records Bureau data of 2019, almost 13 Dalit and Adivasi women are raped every day in India.

This data, on the number of cases registered under Section 376 Indian Penal Code (rape) along with the Scheduled Castes and the Scheduled Tribes (Prevention of Atrocities) Act, 1989 (‘Atrocities Act’), accounts for a mere fraction of the total number of cases. The reporting of cases that deal with sexual crimes, especially against Dalit and Adivasi women, is extremely low. Moreover, even when cases are reported and registered, it is very challenging to include both IPC and Atrocities Act sections on the First Information Report (FIR). This data therefore does not account for a large number of unreported cases and reported cases of sexual violence against Dalit and Adivasi women where FIRs were registered under IPC Section 376, but not under the Atrocities Act.

The journey to justice for women from marginalised communities is fraught.

In furtherance of the spirit of Articles 14, 15 and 17 of the Constitution of India, the Atrocities Act was introduced in 1989 to prevent caste-based violence and ensure justice for victims.

Thirty-one years on, its efficacy in the face of active subversion by State authorities is limited to say the least. Police require caste certificate for FIR under the Atrocities Act, but law does not

All criminal processes are set in motion through registration of a First Information Report (FIR).

Upon receiving information of any cognizable offence, the police officer receiving such information is duty-bound to register an FIR. Section 4 of the Atrocities Act reinforces this duty and makes refusal to do so in cases of caste atrocities a criminal offence.

Aarti (name changed), a 13-year-old girl was raped by an older dominant caste man in her village. An FIR was registered under the Indian Penal Code, 1860 (IPC), and The Protection of Children from Sexual Offences Act, 2012 (POCSO) was filed, but the Atrocities Act was not included in the FIR.
Being from the same village as Aarti, the police officer knew her caste. Yet, he refused to include the Atrocities Act in the FIR since Aarti did not have a caste certificate.

The documentary onus is so high that many, despite being recognised as belonging to a particular caste by the communities they live in, fail to procure a caste certificate

.
As per the Chhattisgarh Scheduled Castes, Scheduled Tribes and Other Backward Classes (Regulation of Social Status Certification) Rules, 2013, the following documents are required for a Scheduled Caste certificate:

1. family tree of three generations,
2. certificate proving that one’s ancestors lived within the geographic limits of Chhattisgarh on or before 10th August 1950 and
3. proof of the father’s caste.
The documentary onus is so high that many, despite being recognised as belonging to a particular caste by the communities they live in, fail to procure a caste certificate.

In Aarti’s case, neither of her parents had any documentary proof of caste. Aarti’s father was brought up by his mother who did not know her son’s paternal ancestors. Despite judicial pronouncements, it is still rare for a caste certificate to be issued on the basis of maternal ancestry.

What do the courts say on registration of FIR under the Atrocities Act?

The law on the registration of FIR under Atrocities Act is unambiguously clear.

The Supreme Court in Lalita Kumari v. Govt. of U.P. (2014) stated that the credibility of information does not have to be determined at the FIR stage. As long as a cognizable offence is “made out” in the information being conveyed to the police officer, an FIR must be registered.

Similarly, in Superintendent Of Police C.B.I. and Ors. v. Tapan Kumar Singh (2003) held that an FIR is “not an encyclopedia”, and thus all relevant facts are not required for its registration.

In Dagadu Gorakh Patil and Ors. vs. Shivaji Jethya Walvi (2013), the Bombay High Court held that the caste of the victim is not a prerequisite for filing an FIR under the Atrocities Act.

In the context of the Atrocities Act, the Supreme Court in Ashabai Machindra Adhagale v. State of Maharashtra (2009) reiterated this position. It held that an application for quashing an FIR was not maintainable solely on the basis that the caste of the accused was not known at the FIR stage.

The logic of Ashabai was taken to its logical conclusion by the Bombay High Court in Dagadu Gorakh Patil and Ors. vs. Shivaji Jethya Walvi (2013), where it was held that the caste of the victim is not a prerequisite for filing an FIR under the Atrocities Act.

The absence of proof of caste can thus by no means be construed as grounds for denying an FIR under the Atrocities Act. The question of the accused’s and victim’s caste, if a question at all, is one that may be determined during the investigation.

Nevertheless, the violence of demanding proof of caste is repeatedly inflicted on victims.

Even when the victim has a caste certificate, it is rare for the police to register a case under the Atrocities Act without civil society pressure.

Even when the victim has a caste certificate, it is rare for the police to register a case under the Atrocities Act without civil society pressure.

In the few cases where the Atrocities Act was registered, the victim was often kept in the dark about the process.

It has become routine practice in some areas for the Inspector of Police to send an FIR registered under IPC to a higher ranked official for inclusion of sections of the Atrocities Act. Police claim that doing so is required under Rule 7 of the Atrocities Act Rules which makes it mandatory for investigations under the Act to be carried out by an “officer not below the rank of a Deputy Superintendent of Police (DySP)”.

On the contrary, Rule 7 makes no mention of registration of FIR. The investigation, which is to be carried out by a DySP ranked officer, begins after registration of FIR. As a consequence of this practice, many victims are not provided with a copy of their FIRs. It is only when they are summoned for trial that they are made aware of the charges against the accused. Naturally, this also denies victims their right to immediate relief and protection during investigation.

Police inaction is criminalised under Section 4 of the Act, which places criminal liability on public servants for negligence and non-performance of duty. However, the space to prosecute police for failure to register an FIR under the Act is also constricted as an administrative sanction is required to prosecute a civil servant.

Moreover, the process for prosecution under Section 4 is mired in confusion.

In some instances, courts have suggested that failure to register an FIR cannot be prosecuted under Section 4 of the Atrocities Act since without an FIR, the provisions of the Act cannot be attracted. This absurd Catch-22 situation has emboldened the authorities to act with complete impunity.

When, and if, a case reaches trial, securing a conviction under the Atrocities Act is rare.

According to the National Crime Records Bureau, the national conviction rate under the Atrocities Act in 2019 was a mere 31.7%, compared to the national average of 42.2% for cases under the IPC (2020).

A primary reason for this is that Trial Court judges often demand proof from the prosecution that the atrocity was committed because the victim belonged to a Scheduled Caste or Scheduled Tribe. Proving such an intention in a criminal trial, where the standard of proof is beyond a reasonable doubt, is almost impossible.

Considering this, key amendments were brought to the Atrocities Act in 2015.

Post the amendments, the Atrocities Act is applicable if the atrocity was committed “knowing” that the victim belongs to a Scheduled Caste or Scheduled Tribe. It is thus no longer upon the prosecution to prove that the intention was caste-based, the law instead assumes that knowledge of the victim’s caste is enough to establish caste-based intention.

It has been five years since these amendments, but many Trial Court judges continue to apply the old test and demand proof of caste-based intention.

It has been five years since these amendments, but many Trial Court judges continue to apply the old test and demand proof of caste-based intention. Then, based on a lack of evidence to prove intention, they continue to acquit accused parties.

Public Prosecutors similarly fail to raise the post-2015 position of law before the Court. If convicted, this is usually under the Indian Penal Code and rarely under the Atrocities Act. In two of our cases, as recent as 2017 and 2018, both accused parties testified to knowing the caste of the victim in court. However, the Court concluded that neither of them committed the offence on the basis of the victim’s caste and acquitted both. One of these cases is currently pending in the High Court.

It is of note here that Judges and Public Prosecutors who deal with Atrocities Act cases are specifically appointed for cases under this Act. That they, either negligently or willfully, continue to make such basic legal errors despite special training speaks volumes.

With hurdles at every stage, the criminal justice system represents an increasingly hostile space for victims.

Until duty-bearers are held accountable, the promises of the Atrocities Act progressive amendments will remain unfulfilled. In Part 2 of this two-part series, we will look at how the state is depriving victims of their right to compensation and rehabilitation under the Atrocities Act.

(The authors are lawyers and paralegals associated with the Chhattisgarh Unit of the Centre for Social Justice and are actively involved in providing legal representation to marginalised communities in rural Chhattisgarh. Over the years, they have supported numerous victims of caste atrocities through the legal process. They may be contacted at [email protected] Views are personal.)