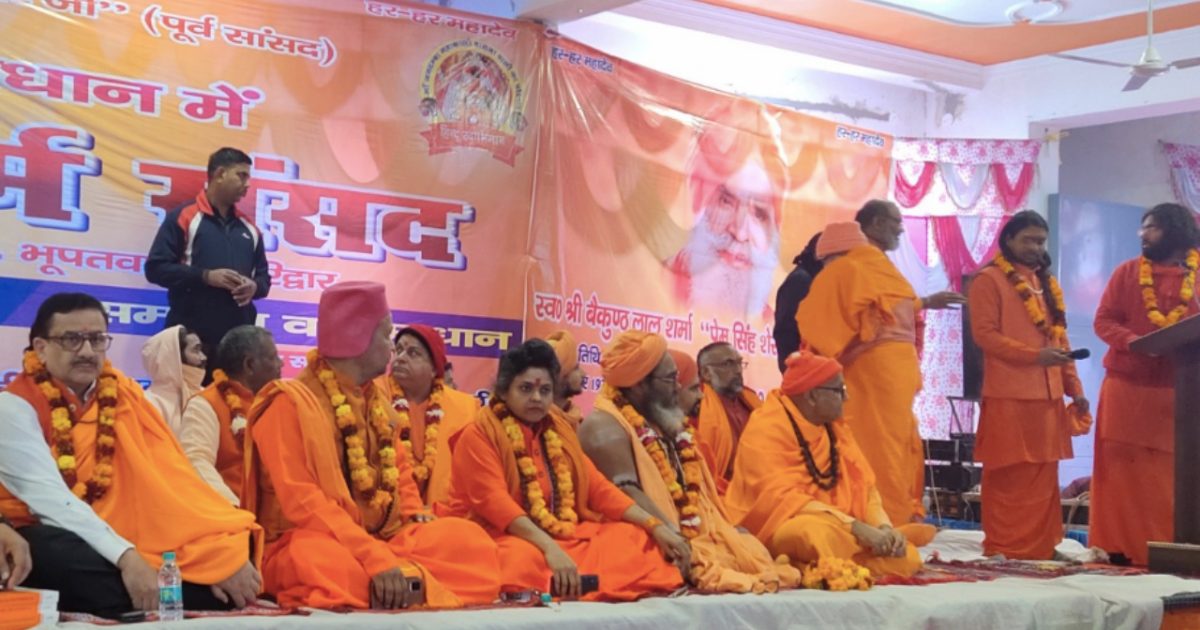 NEW Delhi, Jan 14 (PTI) A journalist, one of the petitioners in the Supreme Court seeking a probe and action against those who allegedly made hate speeches during two events held in Haridwar and Delhi, has written to the District Magistrates [DMs] of Aligarh and Haridwar to take preventive action to ensure that no such speeches are made there.
A bench headed by Chief Justice N.V. Ramana had on January 12 asked the Centre, the Delhi Police and the Uttarakhand Police to respond to the plea filed by journalist Qurban Ali, and former Patna High Court judge and senior advocate Anjana Prakash.
The apex court had said the petitioners are at liberty to make a representation to the concerned local authorities regarding such events, after senior advocate Kapil Sibal, appearing for the petitioners, had said a ‘Dharma Sansad‘ is scheduled in Aligarh.
In his letters sent to the DMs of Aligarh and Haridwar, Ali has said a public event styled as a ‘Dharma Sansad‘ was held in Haridwar and Delhi from December 17-19 last year where such speeches were made.
Ali, while referring to the apex court’s January 12 order, has said the letters are being sent pursuant to the liberty granted by the top court.
The letters said if such events are held in the states of Uttar Pradesh and Uttarakhand, it will not only disturb the public order but will amount to various criminal offences as well.
The letter addressed to the Aligarh DM Aligarh said there are news reports that another Dharma Sansad is being organised in Aligarh on January 22-23, wherein the speakers who participated in the events held between December 17-19 last year are likely to speak again.

“The responsibility to take preventive measures to prevent any possible incident of mob violence therefore falls on the district administration, and you are in charge of the administration in Aligarh, so the responsibility falls on your shoulders to take preventive action to ensure no speeches of this nature are made”, it said.
In his letter addressed to the Haridwar DM , Ali has said there are news reports that the ‘Shankaracharya Parishad’ seers had announced a protest meeting to be held on January 16 against the first information report [FIR] lodged against the speakers at the December 17-19 meeting of the Dharma Sansad.
The letters said that the Assembly election process in both the states is going on and if such speeches are made in the midst of polls, they will destabilize the social order and have serious consequences on the polity of this country .
“We request you to take such preventive action within your powers as is necessary …”, it said.
In its order, the apex court had said, “Kapil Sibal, senior counsel submitted that some more events are being planned, in which there may be a possibility of certain inflammatory speeches. If that is so, the petitioners are at liberty to make a representation to, or bring it to the notice of, the concerned local authorities.”
It had issued notice on the plea and posted the matter for hearing after 10 days.
In their plea filed at the Supreme Court, the petitioners have also sought a direction for an “independent, credible and impartial investigation” by a Special Investigation Team into the incidents of hate speeches against the Muslim community.
The plea, which specifically referred to the “hate speeches” delivered between the “17th and 19th of December 2021 at Haridwar and Delhi”, has also sought compliance of apex court’s guidelines to deal with such speeches.
One event was organised in Haridwar by Yati Narsinghanand and the other in Delhi by ‘Hindu Yuva Vahini’ allegedly “calling for genocide of members” of a community, it said.
The Uttarakhand Police had filed an FIR on December 23 last year under various provisions of the Indian Penal Code against some persons, including Sant Dharamdas Maharaj, Sadhvi Annapoorna alias Pooja Shakun Pandey, Yati Narsinghanand and Sagar Sindhu Maharaj.
A similar complaint was filed with the Delhi Police for the second event organised in the national capital.
The plea said that no effective steps have been taken by Uttarakhand and Delhi police.