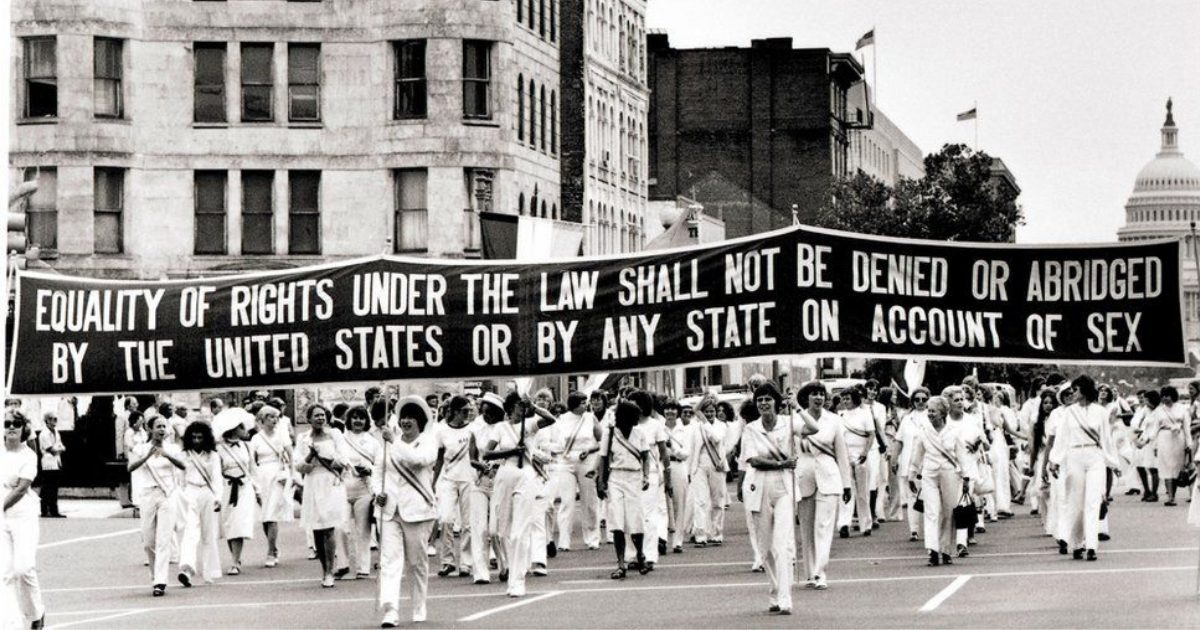 Has Equal Rights Amendment Come of Age in the US?

Last year marked the 100th anniversary of the Nineteenth Amendment to the US Constitution guaranteeing women the constitutional right to vote. ERA was adopted in 1972 and subjected to ratification by the states. It took another 48 years for the 38th state of the US to ratify the Amendment. However, this amendment was not officially added to the Constitution because of a congressionally imposed deadline. It is up to the US Congress to act decisively now, writes N. KAVITHA RAMESHWAR.

A recent awe-inspiring image of two women – US Vice-president Kamala Harris, and House Speaker Nancy Pelosi —flanking US President Joe Biden while he addressed a Joint Session of the US Congress is a new paradigm in American history and a harbinger of change.

It has set the stage for ushering in the era for ERA – Equal Rights Amendment – “a lady in waiting” for the last 48 years to serve every woman of the country.

With women being given their share of power and responsibility in the recent US administration, the deeper message is that ERA has now come of age.

There is no further delaying its integration and assimilation into the US Constitution to give equal rights to women. Time seems to have healed what reason could not.

For the uninitiated, ERA was introduced in the US Constitution in 1972 and reads: “1. Equality of rights under the law shall not be denied by the United States or by any State on account of sex…”

Last year, 2020, marks the 100th anniversary of the Nineteenth Amendment to the US Constitution guaranteeing women the constitutional right to vote. ERA was adopted in 1972 and subjected to ratification by the states. It took another 48 years for the 38th State of the United States (Virginia) to ratify the Amendment. This ratification gave rise to an unprecedented situation in American constitutional history. For the first time, a constitutional amendment that had cleared both hurdles required by Article V of the Constitution–adoption by two-thirds of Congress and ratification by three-fourths of the states–was not officially added to the Constitution because of a congressionally imposed deadline. The US Congress has the power to lift the deadline.

Not a Tangle, but a Wrangle

After the multi-generational struggle of the women who conceived, framed, adopted, struggled and ratified the Equal Rights Amendment, the opposition’s reliance on a deadline to abort these efforts is another way to undo and disrespect their work.

That itself is one of the issues  ERA seeks to address.

Legal questions have now arisen as to whether ERA has indeed expired in 1979 as per the seven-year ratification deadline. A combined reading of the text of the US Constitution, the convention governing the Amendment of the Constitution, coupled with decisions of the US Supreme Court, would amply prove that it is up to the US Congress to act decisively.

The Constitution of the US does not stipulate any deadline in Article V. The only provision that addresses the amendment procedure is Article V which only requires that an amendment garner a two-thirds supermajority of each house of the legislature, after which it must be ratified by the legislatures of three-fourths of all the states. Nearly all 27 amendments have been ratified in this manner.

History would have it that in 1789 the US Congress had adopted an Amendment to the US Constitution which states that no law varying the compensation of the services of senators and representatives shall take effect until an election of representatives shall have intervened. The amendment adopted in 1789 was finally ratified by the 38th state only in 1992, a full 203 years after it was adopted and both Houses of the Congress adopted resolutions recognising that the amendment has been validly ratified.

Harris, having ties with India and being a woman who has achieved several firsts, would be conscious of the constitutional right to equality guaranteed to Indian women.

India had the distinction of guaranteeing the fundamental right to equality to women from the inception of its Constitution.

The transformative interpretation of the Constitution by the Indian judiciary, in tandem with progressive attitudes of society, has ensured the dismantling and demolition, albeit slow, of the stereotypical understanding of the right to equality.

The US in the absence of a constitutional backing and framework for the equal rights of women only has statutes to fall back on to ensure this. In America, the Equal Pay Act, 1963 and the Civil Rights Act, 1964, still hold the field and are the only laws to fall back upon for equal treatment of women. However, the Fourteenth Amendment which says no person shall be denied equal protection of the laws was relied upon and employed frequently and famously by Ruth Bader Ginsburg (later Justice Ginsburg) in all the cases where she wanted to enforce equality for women.

From the pioneers of the ERA movement, starting with Abigail Adams, Elizabeth Cady Stanton and Lucretia Mott to Dorothy Kenyon, Martha Griffins, Pauli Murray and Ruth Backer Ginsburg to the dozens of other women working tirelessly and unstoppably towards the dream of making equality a constitutional reality for their gender, they have come a long way.

A new era has now dawned for ERA and for women to positively assert that “We, the women” are part of “We, the people” of the US.

Justice Benjamin Cardozo said: “Justice is not to be taken by storm. She is to be wooed by slow advances”. Equality is but an aspect of justice and the time has come for it to be an integral and inseparable part of the US Constitution.

One wonders whether the Lilly Ledbetter Fair Pay Act of 2009 and the struggle behind it in Lilly Ledbetter v. Goodyear Tire and Rubber Company would have been so much more different in perspective and outcome if the US Constitution would have incorporated the equal rights amendment. Lilly Ledbetter had petitioned the Supreme Court for years of discrimination, alleging lesser pay compared to male colleagues having equal or less seniority. The US Supreme Court had dismissed her claim stating that it was a belated one.

It was Justice Ginsburg’s sharp signature dissent, calling the decision of the majority a “parsimonious” reading of Title VII of the Civil Rights Act, 1964 (along with three other judges) that prompted Congress to pass the Lilly Ledbetter Act.

A constitutional amendment is the foundation stone in the building of the bulwark of equality for progress and emancipation of women. It hardly needs emphasis that specific constitutional provisions are a more effective bulwark than statutory law alone.

ERA, as an addition to the US Constitution, would mean bestowing historical recognition to hundreds of women who were behind every other successful woman today. The US Congress with 142 women (24 senators and 118 House representatives), excluding four non-voting delegates, forms 27% of the Congress, the highest in the history of the US. They cannot afford to let their chance to define history slip beneath their feet.

(N. Kavitha Rameshwar is an Advocate in the Madras High Court. The views expressed are personal.