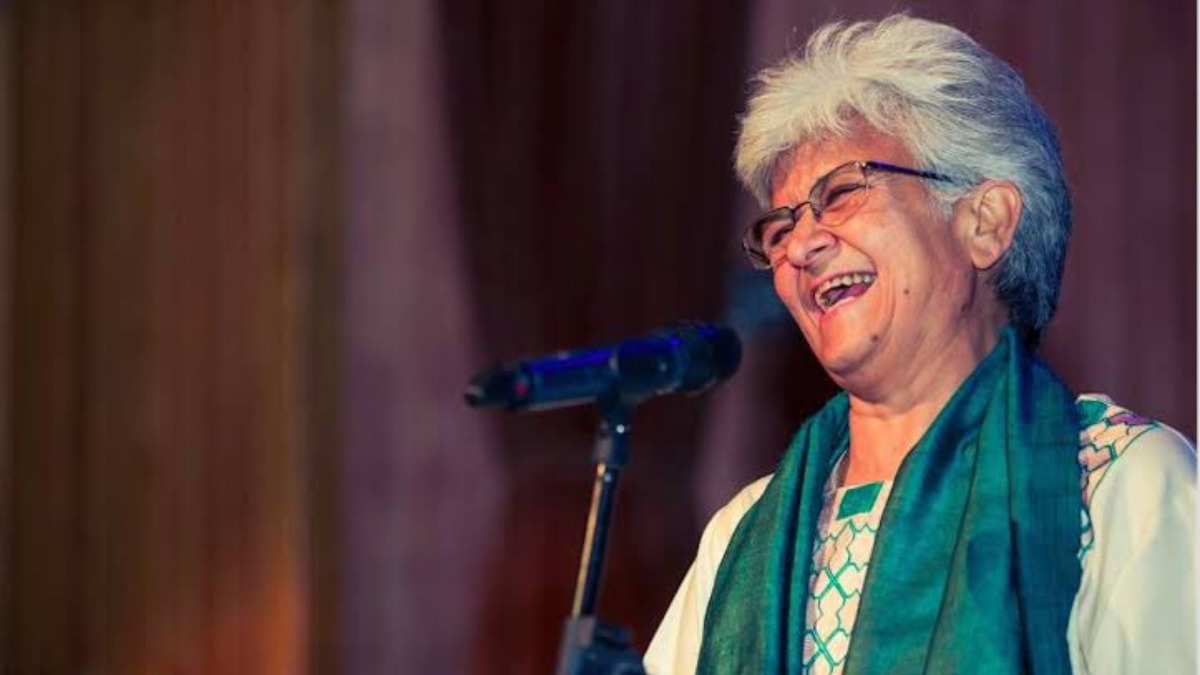 Freedom, my lady, comes at a cost: how Kamla Bhasin impacted my life

SARIYA ALI writes evocatively about the influence Kamla Bhasin had on her understanding of feminism and her pursuit of freedom.

THIS is not a eulogy to Kamla Bhasin, since anything written about her would not do justice to her immense legacy.

This write-up is an emotional response to the news of her demise, which takes me to five years back when, during my college days, I came to know of azaadi [freedom] for the first time ever in its real sense. I remember that day when I got a chance to yell, “Agar tum na doge Azaadi, hum cheen ke lenge Azaadi” with all my heart and soul by her side.

Little did I know then that the notion of azaadi would become so close to my heart over the years, that Kamla ji’s demise would come like a knockout blow, and bring home the fact that us women are still far away from the goal.

What does freedom mean? It begins, for me, with the freedom of thought, making informed choices, and having an independent voice. In the context of the women’s movement, reaching this stage may demand one to be financially independent, as the mix of capitalism and patriarchy makes for a potent interplay to keep women struggling.

Still, freedom comes at a cost. Most of the time, it is not monetary, and it has been paid by most of us but ‘to not stop’ has kept us going. We need to keep going.

Being a woman who has come a long way from a conservative hometown and a household confused between conservative values and progressive urges, today I stand in the waters where I wanted to be. The rush of the stream under my feet is still not stable, and I continue not to be independent in a lot of ways. Nevertheless, trying to set my steps right, I think of the costs women like me pay to be here, to feel that they are breathing the right air, the right way, the way they wanted to be.

These answers never come clearly, because since childhood, someone has always remained around to guide, direct, instruct, and order. Today, when you see your reflection in the mirror, you notice both the scars and the smile. The scars of being raped or molested, the experience of always being in a minority, the discouragement of being considered an optional opinion in multiple spaces, the terror of being unsafe all the time, and the constant lack of confidence due to the fear that taking a single wrong step might bring the whole journey crumbling down.

These are just a few of the many transactions each woman, who sets herself towards azaadi bears in her heart and life.

But let me go back to the smile I mentioned; the smile comes from taking so many blows from society yet being able to stand upright.

At times, all of it seems heavy, but now and then, feminist literature and voices like of Kamla ji’s have been a constant source of strength. For example, when Kamla ji said, “Your honour doesn’t reside in your vagina”, the statement echoed in my heart so deep that I have always tried conveying it to the victims I have been of help to.

The immersion into literature has not just debunked facets of patriarchy, but has also been a base to realise that my independence might come with getting rid of the patriarchy, but it cannot be limited to that. It would mean to not just run away from a suppressive set up, but being able to lay the foundation of a new world with the bricks of my own ideas. It would mean for me to reach the stage which the Lebanese American poet Khalil Gibran wrote of, “For you can only be free when the desire of seeking freedom becomes a harness to you, and when you cease to speak of freedom as a goal and a fulfilment”.

Because my lady, we might well have to pay the costs till the time not even a single girl needs to go through these, all over again!

(Sariya Ali is working at the Azim Premji Foundation in Barmer, Rajasthan. She has completed an M.A. in development from Azim Premji University and a B.A. in philosophy from Miranda House, University of Delhi. The views expressed are personal).