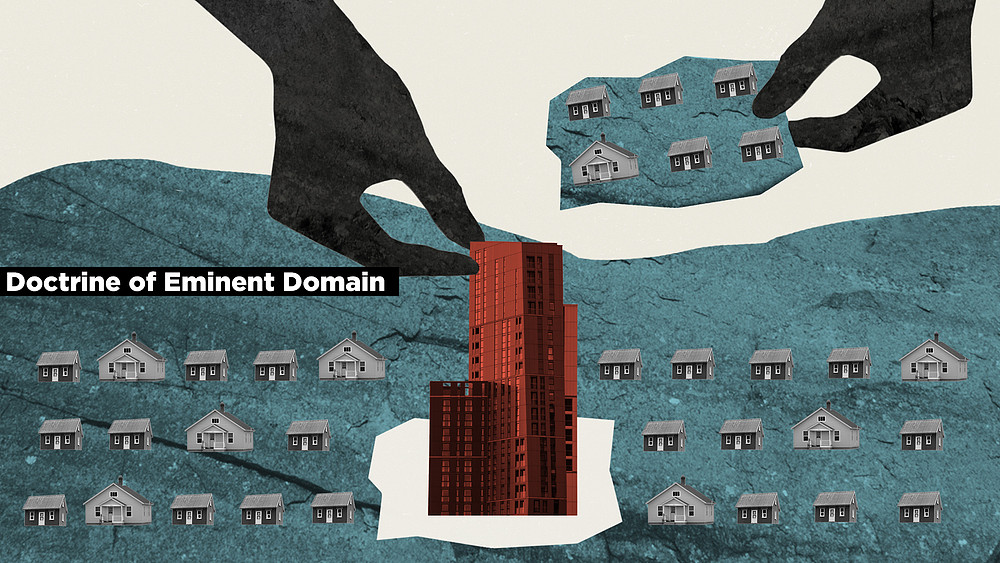 Eminent domain doctrine in India and the lack of due process

The practise of the eminent domain doctrine in India is in abrogation of due process because there is no clarity over what constitutes legitimate public purpose for which someone’s private property can be taken away, and courts have no power to determine whether the compensation offered by the State is fair and just, writes DIVYANSHU DEMBI.

Frustrated, Hakeem approached the Supreme Court. The court, in its judgment in the case of Project Director, NHAI vs. M. Hakeem (2021) unflinchingly reiterated the settled position when it comes to compensation under the Act, which is that the court had no competence to enhance the compensation and could only either set the award aside, or remit it back to the arbitrator. In other words, somehow, when it comes to land acquisition and compensation, the central tenet of a strong judiciary i.e. judicial review, disappears.

Hakeem, like many others, was left with whatever measly amount the government bothered to give him for his land, and no recourse. However, the inability of courts to adjudicate on compensation of land acquisition is nothing new and such injustice is unsurprising when we consider the history of eminent domain doctrine in India.

Even though some jurists argue that defining private property is impossible, we all have an idea of what the term means in common parlance – any property that is privately owned and not meant for public use.

To understand why property rights enjoy a central position in the constitutional history of nations, we need to understand three main arguments:

First, that a robust right to property is a pre-condition for establishing a liberal and progressive society. It is based on the idea that all human rights essentially boil down to property rights.

Second, because property rights essentially answer the question – ‘what is the best use of this resource’ – only that person who owns it, or who comes to own it through a system of voluntary exchange, should have the right to make this decision. No one else, not even the State, should make the decision for him.

Third, the Lockean idea of constitutional protection of private property is based on the notion that rights are not created by the constitution, but are only protected by it. Such an understanding implies that the constitution and the sovereign cannot take away property involuntarily.

It has been widely recognised both in courts and scholarship that strong property rights are a sine qua non to economic prosperity. In Delhi Airtech Services Pvt Ltd v. State of U.P (2011), the Supreme Court opined that “[i]t is accepted in every jurisprudence and by different political thinkers that some amount of property right is an indispensable safeguard against tyranny and economic oppression of the Government”.

Eminent domain, simply put, is the State’s power to acquire private property against the consent of the owner for a ‘public purpose’. There are three commonly accepted elements to it. First, the taking should be under a valid law. Second, the land owner must be paid just compensation. Third, the acquisition of the property should only be for public purposes.

To understand why even now, countless people like Hakeem are cheated out of the value of their land with the courts being reduced to meek spectators – we need to go back to our founding.

Article 31 has the distinction of being one of the most debated and the most amended provision of the Constitution. The constituent assembly under Jawaharlal Nehru was clear about the fact that India would be formed as a socialist State.

However, at the time around 40-60% of the land in India was owned by wealthy landlords, or zamindaars – and such concentration of economic and social power went against the socialist logic. The State wanted to bring large scale agrarian reforms and land redistribution, but this meant that under the then constitutional regime that protected against arbitrary taking of private property, all such zamindaars would have to be paid compensation for their lands.

Thus, they were in a conundrum. If they compensated these wealthy zamindaars, it would lead to the same inequality that the reforms aimed to deconstruct. With one side arguing for giving no compensation against acquiring zamindaari land and the other side arguing for robust property rights and just compensation, the debates were mainly centred on how to solve the zamindaari issue without creating unchecked eminent domain power for the State. As I will show now, the assembly failed to do either.

Out of this tension, article 31 was born. Article 31(2) mentioned only ‘compensation’ instead of ‘just’ compensation, and article 31(4) and 31(6) stated that if the parliament passes any law that contravenes this article, it could not be invalidated by any court. The assembly feared that if they used the term ‘just’ compensation, the courts would step into their agrarian reform agenda and thwart it, either by setting an adequate compensation or invalidating the law itself on grounds of violation of fundamental rights. So, they bypassed the issues by structurally depriving the courts of their power of judicial review, thereby driving a coach and horses through due process of law.

The original sin of the framers was that they took themselves to be fortune tellers when they were not. They believed that the inequality consolidated in colonial India would simply be replicated in a free India without their central planning. They failed to understand that this inequality was a product of colonialism – where neither man, nor commerce was free. And, in free India where both were free, the same inequalities would break down with time.

A short history of the legal and political battle that the government fought with the judiciary aiming to establish a command and control economy is reproduced below and also available here.

The ghosts of yesterday

The questionable history (and thus present) of eminent domain practice in India betrays due process in two ways. Procedurally – by wholly depriving the courts on adjudicating on the quantum of compensation itself, as seen in M. Hakeem and, substantially – by depriving the courts of adjudicating on whether the taking constitutes a valid use of eminent domain doctrine or not.

This is sinister yet unsurprising because the constituent assembly itself never intended to observe due process of law. And the ball that they set rolling is still bulldozing the property rights of countless individuals.

This is precisely what happened. Drafting a clause with the intention to be misused specifically, will with time, be misused generally.

The culmination of this history is twofold:

First, is that we still do not have a clear and defined idea of precisely when (beyond the vague public purpose test) is it legitimate for the government to take away land, and thus as a result lack substantive restrictions upon that power. This is why numerous people like Hakeem can have their lands taken away from them because the government simply states that their land is required for ‘public purpose’ without the courts going into the merits of the claim.

Second, even when such power is exercised legitimately, the consistent practice of depriving the courts from adjudicating upon the justness of the compensation continues to constitute a fraud on the judicial power of the court and constitution, and continues to constitute an unjust exercise of State power. Which is why people like Hakeem, even when their land is legitimately needed for public purposes, are never paid just compensation.

Where are we now?

Even though LARR provides for challenging the compensation by approaching the high court, most individuals whose lands are taken away are poor and cannot bear the cost of litigation. A study of 1660 judgements from the Punjab and Haryana High court showed that the average compensation is only about one fourth of the market value of the land. Given that the default in land acquisition cases is measly compensation, the NHAI Act is even more notorious in so far as it does not even provide for effectively challenging the compensation set by the government at all, with the arbitrator being a government employee himself and the court not being competent to enhance the arbitral award.

Since land is on the Concurrent list of the Constitution’s Seventh Schedule, many states have either severely diluted the LARR to skip basic requirements, or have completely bypassed the Act by invoking outdated legislations through their power under Article 254(2). Many states also use these outdated laws to acquire land for purposes that may not come strictly under the public purpose definition – such as constructing an oil refinery, building a factory, and opening a burial ground, among other things. Given that these are not strict public goods, what legitimacy does the State have to exercise its eminent domain powers in these cases? This is exactly where the lack of a strong eminent domain doctrine hurts us.

Thus we currently need two things. First, is to grant courts the ability to decide on compensation in order to ensure that people get just compensation. And secondly, to develop a robust doctrine of eminent domain use itself – through legislative codification and judicial decisions.