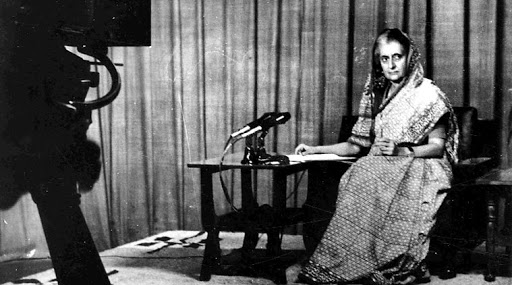 Emergency: Who Benefited from it?

The Modi government has shown it is unnecessary to declare an Emergency to browbeat people who stand up against it. For all its denunciations of the Congress on 25 June every year, would the BJP under Prime Minister Narendra Modi ever tolerate a protest movement like JP’s, asks PARSA VENKATESHWAR RAO JR.

EVERY year on 25 June, Bharatiya Janata Party (BJP) leaders recall the crime against democracy and humanity that former prime minister late Indira Gandhi and the Congress committed by imposing the Emergency and sending hundreds—they would say thousands—of Opposition leaders, especially those who belonged to the then Bharatiya Jana Sangh (BJS), the prequel of the BJP, to prison.

The denunciation of the Congress has become a ritual for BJP leaders. And they do it especially conscientiously on every anniversary of the Emergency. Many present-day frontline leaders of the BJP argue that they were victims of the whiplash of the fascistic Emergency. We have been told that Prime Minister Narendra Modi, who was with the Rashtriya Swayamsevak Sangh (RSS), had gone underground and escaped arrest as many other RSS activists were picked up.

Prominent among the younger arrested student activists was the late Arun Jaitley, then president of the Delhi University Students Union (DUSU) and a member of the RSS-affiliated student body, the Akhil Bhartiya Vidyarthi Parishad (ABVP). The late Union Minister and BJP leader Sushma Swaraj stood up against the Emergency but not as part of the right-wing RSS. She was socialist at the time, a fact she left far behind as she joined the BJP and became a staunch Hindu right-wing politician.

BJP leaders confine their denunciation of the Emergency to condemnations of the Gandhi family and the Congress party. They never assert that they would not let that happen again or consider the Fundamental Rights enshrined in the Constitution and suspended during the Emergency sacrosanct.

During the Emergency, the government’s lawyers even told the courts that a citizen does not have the fundamental right to life. The BJP leaders carefully avoid declaring their commitment to Fundamental Rights.

Prime Minister Modi’s declaration at the G-7 summit that India stood for democracy and open society sounded quite half-hearted, for his government has shown utter disregard for human rights. It has imprisoned activists like poet Vara Vara Rao, Fr Stanley Swamy, Sudha Bharadwaj, Vernon Gonsalves, Gautam Navlakha, Anil Teltumbde, Sadaf Jafar, SR Darapuri, students such as Umar Khalid, Natasha Narwal, Devangana Kalita and Asif Iqbal Tanha [only some of these people, including the latter three, have been granted bail].

Law and Justice Minister Ravi Shankar Prasad recalls with pride that he and his party—that is the BJP—colleagues had opposed the Emergency and that his party would never let it happen again. It is an assurance that does not sound very reassuring because the Modi government, of which he is part, has been persecuting old men and young students by using the law of sedition. It has been keeping activists in prison and denying them bail in the Bhima-Koregaon case, the anti-Citizenship Amendment Act 2019 protests and under its watch, the police have accused them of conspiring to foment the riots that erupted in Northeast Delhi in February 2020.

To an unbiased observer, these are false cases and the sole intention of the government is to terrorise protesters. The Modi government has shown in more ways than one that it is unnecessary to declare an Emergency to browbeat people who stand up against the government.

The point is that there are important questions to ask about the Emergency. It is not sufficient to denounce it, even though it is a decent thing to do. Jayaprakash Narayan, or JP, created a storm of protest in Bihar and rode it in the wake of the Allahabad High Court verdict that disqualified Indira Gandhi in the election case. This, in turn, triggered the declaration of the Emergency on 25 June 1975.

In his 2002 autobiography, Memoirs: Uneasy is the Life of the Mind, noted political theorist Rajni Kothari makes the stunning observation that the protest movement JP led in Bihar mainstreamed the RSS and gave it political legitimacy.

Among the large number of students who participated in the JP movement were RSS volunteers. When critics pointed out that the participation of communal RSS would hurt the legitimacy of his movement, JP, in righteous indignation, retorted that the RSS was a patriotic organisation.

Kothari, an acute political theorist, could see how the endorsement of the RSS by the BJP had played out consequently. The Bharatiya Jana Sangh merged with the Janta Party along with the Swatantra Party and several socialist parties. When socialist Madhu Limaye raised the dual membership held by former Jana Sangh members (due to their allegiance to the RSS), hundred Janata Party members walked out of the government rather than give up their RSS membership. The BJP was formed in 1980 and the RSS directed the Ram Janmabhoomi agitation in the 1980s. The RSS is the parent organisation of the BJP rather than the other way around. It pulls the strings of the BJP from beyond the pale of politics.

All this came about because of JP’s strong approval of the RSS in the Bihar protest movement. Things have changed since then, and the BJP is now in power at the Centre. That is why we must ask the government led by Prime Minister Modi: would it ever tolerate a protest movement as the one JP had led?