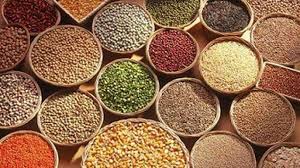 ECA, 2020 Overlooks Food Security and Farmers’ Rights in a Win for Agri-Businesses and Exporters

The Indian government seems to be at war with its people. The current series of events shows a political force that wages battles against civil rights activists, university students, journalists and now, its farmers. AMRITHANANDA CHAKRAVORTY writes about the ongoing farmers’ protests waging across the country, laying emphasis on the history and implications of the third farm law, the Essential Commodities Act, 2020.

THE protests led by hundreds of farmers at various borders of Delhi ranging from Singhu to Ghazipur are still going strong. The farmers are battling the might of the Indian State that has managed to cut them off from the rest of the city and the country. Security forces have ramped up layers of barricading, planting nails on roads, cutting off water and electricity supply accompanied by heavy patrolling of paramilitary forces. This is a government at war with its people — first with civil rights activists, then university students, followed by journalists and now our farmers.

The three laws that form the heart of the farmers protests are the Farmers (Empowerment and Protection) Agreement on Price Assurance and Farm Services Act, 2020, the Farmers’ Produce Trade and Commerce (Promotion and Facilitation) Act, 2020 and the Essential Commodities Act, 2020 (ECA).

This article seeks to focus on the third contentious law and its implications on food security in India.

The Origin of ECA

The history of ECA can be traced back to the pre-independence time of the Defence of India Act, 1939. The Government of India, under British rule, framed regulations to combat the shortages of essential supplies of food and other items during the Second World War.

After gaining independence in 1947, India was a nascent country struggling with massive food shortages. It was considered critical that the supply of essential items like food grains, edible oil, kerosene, pulses and other important commodities not be left to the vagaries of the market or seasonal outputs. The need for price regulation was keenly felt as well.

This is also evident from the Directive Principles of State Policy (DPSP) enshrined in Part IV of the Constitution. Article 39(b) of DPSP mandates the State to distribute the ownership and control of material resources of the community in ways that best subserve the common good. Article 39(c) of the policy says that the State ought to ensure that the operation of the economic system does not result in the concentration of wealth and detriment of means of production.

Accordingly, in 1955, the ECA was enacted by the Parliament to empower the Central Government to control the production, supply and distribution of certain essential commodities in the interest of the general public. In effect, maintaining an adequate supply of essential goods at a fair price is the crux of the Act.

The Courts have time and again emphasised that the ECA is welfare legislation meant to prevent hoarding of essential commodities, shortage of supplies and the consequent spike in the prices. A Constitution Bench of five Supreme Court judges, in a landmark decision in Shree Meenakshi Mills versus Union of India (1974) 1 SCC 468 had elaborated on the objective behind the ECA. The judgement also stated how it ought to be implemented by noting in para 65 that “the maintenance or increase of supplies of the commodity or the equitable distribution and availability at fair prices are the fundamental purposes of the Act.”

Similarly, this objective has been repeatedly reaffirmed by the Supreme Court in several cases. This includes a seven-judge bench decision in Prag Ice and Oil Mills versus Union of India[(1978) 3 SCC 459]. The Supreme Court, in this judgement, stated that “the objective (of ECA) is to secure equitable distribution and availability at fair prices so that it is the interest of the consumer and not of the producer, which is the determining factor in applying any objective tests at any particular time.”

Amendment of ECA,2020 and the Government’s Stand

It is a well-known fact that the three farm laws were passed in Parliament without any substantive debates, especially on the impact of the Act on consumers. This includes the poor and members of vulnerable communities who were excluded from the Public Distribution System (PDS), owing to Aadhaar mismatch or other exclusion issues.

The amendment of the Act itself does not state rationales for such policy change. Therefore one has to rely on the statements given by ministers or the Economic Survey, 2020-2021 tabled by the Ministry of Finance in the Parliament on 31 January 2020 to understand its objective.

As per the Survey and statements given by Niti Aayog officials, the purpose of ECA, 2020 was to ostensibly benefit the farmers and to increase India’s food export. However, neither the Economic Survey nor the Niti Aayog officials were quoted saying anything in favour of the consumers and how to ensure that consumers avail fair prices for food and other essential commodities.

It is completely disingenuous to say that ECA has lost its purpose today since India has allegedly become a food surplus country. This is despite the economic devastation that has happened in India, owing to the COVID-19 pandemic and also because of the government’s anti-poor policies.

In the last year, even before the onset of the pandemic, India’s unemployment rate rose to its highest in the last 45 years. According to data released by the Centre for Monitoring Indian Economy (CMIE), India’s unemployment rate was at a record high of 10% in December 2020. In the same year, more than two crore people lost their jobs in the country during the pandemic. The government provided no assistance to these people to withstand the sudden loss of livelihood and financial security.

Similarly, as per the Global Hunger Index, 2020, India is ranked 94th out of 107 countries, which is classified as having a ’serious hunger problem’. This ranks the country much behind its neighbours in the region, Bangladesh (75th), Pakistan (88th), Nepal (73rd) and Sri Lanka.

It is in this context of widespread economic devastation, loss of livelihoods, rising hunger and extreme poverty that one has to consider the aims and objectives of the ECA, 2020. The government claims that the Act is no longer required to regulate the supply of food items to keep prices under control. Neither the ministers nor any document from the government indicates how it seeks to ensure a decline in food inflation or if it allows consumers to buy food at cheaper prices. Citing the existence of PDS is not enough especially at a time when the PDS is under attack from many quarters of the government itself.

The ECA is an integral part of the food security framework in India, and to have it diluted in the name of food surplus is highly arbitrary and ill-thought-out. This would have severe consequences on people’s abilities to feed themselves and their families amidst a large economic depression.

Several studies have shown that the middle class has been severely affected by food insecurity as well. People are cutting down on green vegetables, pulses and meat to feed their family members, and they also lack a social safety net to fall back on. Furthermore, if the ECA, 2020 would benefit the farmers as producers, then millions of farmers would not be opposing these laws for the last three months.

In conclusion, ECA, 2020 has been enacted contrary to its purposes put forward initially which was to maintain the regular supply of essential commodities at a fair price for the benefit of the consumers. The Act was not meant to profit the big agricultural businesses or to help increase India’s agricultural exports. The farmers have understood that these laws, including the ECA, 2020, have been enacted for the benefit of large agri-food industries and exporters, and not for the farmers nor the common consumers.

India, which is the largest democracy and the second-most populous country in the world is currently languishing at the bottom of the global hunger ranking. Meanwhile, the government is prioritising opening the agricultural market to a few big businesses while a majority of its population cannot afford three meals a day.

The farmers’ protest is as much about the farmers’ right to produce sustainably, via minimum support price, as it is about the food security of 1.3 billion Indians in the 21st century.  (IPA Service)

(Amritananda Chakravorty is a Delhi-based lawyer. All views expressed are personal)