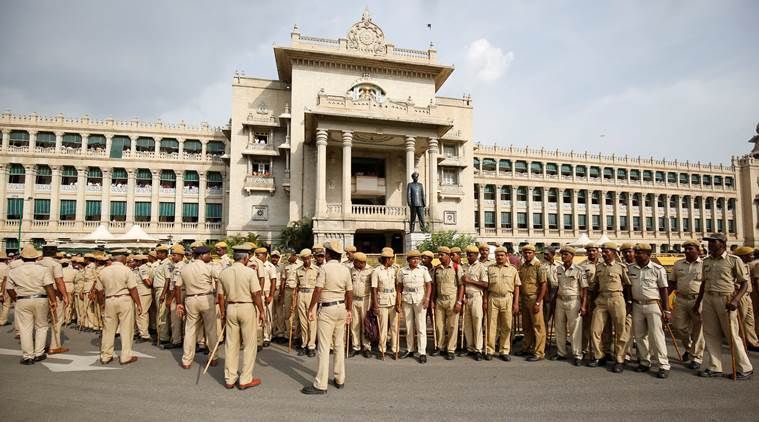 Dignity, Equality and Due Process during the Lockdown

THE Universal Declaration of Human Rights in its preamble recognizes the inherent dignity of members of the human family as the foundation of freedom, justice and peace. The significance of dignity in the rights discourse in India has been clearly spelt out by the Supreme Court when it held that the right to life meant a dignified life and not mere animal existence.

It has even approved the opinion of the former Chief Justice of the Supreme Court of Israel that dignity is a factor which unites human rights into one whole. Unfortunately, the dignity of citizens is being brazenly violated by the police, under the guise of enforcing the lockdown and it raises the question, how civilized is the police force?

In Karnataka, there have been at least two incidents of the police forcing alleged violators of the lockdown, to strip.  In Bangalore, a traffic police Sub Inspector was seen forcing few men to take off their shirts publicly, and wrap it around their face as masks. Similarly, in Davanagere, a home guard intercepted a biker and forced him to take off his shirt and use it as a mask.

The media personnel filmed both these incidents and they were telecasted later, not with the intention of condemning the acts but to praise the ‘strict measures’ taken by the police. Stripping a person in public is a serious assault on his dignity and can cause humiliation from which he may never recover. It reflects the beast in these policewomen who exploited the power imbalance between them and the victims. These policewomen deserve to be prosecuted under Section 355 of the Indian Penal Code, which criminalizes the use of force to dishonour a person. The media has been irresponsible and insensitive by telecasting these incidents without blurring the faces of the victims, and by glorifying these human rights violations.

In Mysore District of Karnataka, the police have resorted to shaming alleged violators of the lockdown. They were taken to the police station and made to hold slates on which an apology was printed. This was photographed and they were directed to upload the photographs on their social media accounts! Shaming is not recognized as a legitimate punishment by any law and is a grave violation of privacy, which has been recognized as a fundamental right by the Supreme Court.

It might be useful to recollect that the Allahabad High Court had directed the U.P police to remove posters they had put up, to name and shame anti-CAA protestors. Shaming is antithetical to due process as the police are both the accuser and the punisher, while the accused is deprived of an opportunity to defend himself in a court. What if these men were out on the road to purchase essential commodities? If in case, the police believed that they had no valid reason to be out on the road, they should have filed a case against them for violating the lockdown and followed the procedure laid down in The Code of Criminal Procedure, 1973.  Forcing people to hold a slate with an apology printed, to dishonour them attracts Section 355 of the Indian Penal Code, just as stripping does.

While the common man runs the risk of getting beaten or humiliated even while heading out to purchase groceries or access essential services, there have been incidents of MLAs unabashedly violating the lockdown. On 10 April, MLA Jayaram hosted a birthday party in Tumkur, Karnataka which was attended by over 500 people. An FIR has been filed only against 3 of his supporters and not the MLA himself despite overwhelming evidence against him. This is not an isolated incident as another MLA celebrated the BJP’s Foundation Day with his supporters during the lockdown.

MLA S R Srinivas was seen playing with his grandson who drove his toy car on the streets of Tumkur.  It is likely that the local police have been complicit in allowing these violations to take place, as they occurred in full public glare. It also raises questions on the efficiency and competence of the districts’ intelligence wings which ought to have alerted the top brass about these violations. These incidents are a blot on rule of law which is founded upon supremacy of law and equality before the law, both of which are envisaged in our constitutional scheme.

This lockdown has seen equality, dignity and due process being violated. It has emboldened the police to behave like an imperial force dealing with subjects of a colony. The time is ripe for sentinels such as the courts and Human Rights Commissions to intervene and uphold constitutional and human values.

[Rahul Machaiah is a post-graduate student of law at Azim Premji University, Bangalore]