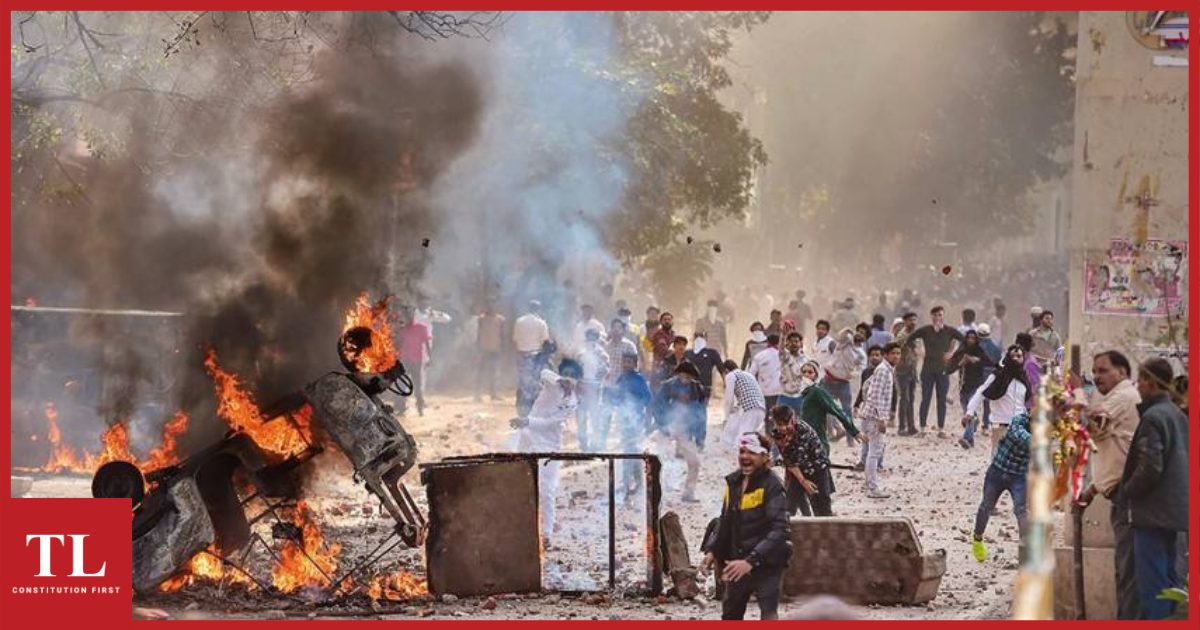 Over a year after the communal violence in north-east Delhi, a major issue emerging for victims in their quest for justice is the clubbing of FIRs (first information reports) of different natures. Even the courts, on several occasions, have discouraged the approach of the Delhi Police and rapped it for merging different complaints into a single FIR.

Nisar Ahmad, whose house and a godown of ready-made garments at Bhagirathi Vihar were looted by a mob on February 25, could not get an FIR registered based on his complaint. After Rakesh Kumar Rampuri, the metropolitan magistrate at Karkardooma courts, ordered the investigating agency to lodge a separate case on Ahmad’s complaint within five days, the Delhi Police challenged the order in a higher court.

Refusing to register a separate case, Ahmad’s complaint, wherein he had named few people as attackers during the violence, was clubbed with FIR No. 78/2020 — registered on the complaint of one Aas Mohammad (a victim of theft and rioting) at Gokalpuri police station under sections 147 (rioting), 148 (Rioting, armed with deadly weapon), 380 (theft in dwelling house), 427 (mischief causing damage to the amount of fifty rupees) and other sections of the Indian Penal Code (IPC). Interestingly, he was made a witness, instead of a victim, in three other FIRs (101, 102 and 103) filed in the same police station.

It has been stated in FIR No. 78/2020 that Ahmad was witness to violence on February 24 in which members of a “particular community” were killed and injured. It further said the “rioting, arson, robbery, hooliganism” continued throughout the night and those identified as Muslims were beaten to death and their bodies thrown into the Bhagirathi Vihar nala (drain). He had locked himself with his family inside his house.

His counsel, M.R. Shamshad, submitted that some of the accused reached Ahmad’s house the next day (February 25) at around 9:30 am with a group of at least 200 people. They broke into Ahmad’s house and looted it. It was alleged that a trunk containing the jewellery belonging to Ahmed’s daughter-in-law and other valuables were looted. Three motor vehicles — a Hero Splendor, a Bajaj Platina and a Royal Enfield Bullet — were dragged out onto the road and set on fire.

The rioters, it was submitted, also raised the shutter of his godown and looted garments worth Rs 10 lakh. With the help of a neighbour, his lawyer said, Ahmed and his family were safely escorted out of the area.

In his subsequent complaints, Ahmed alleged the accused threatened him, his sister and her family at the behest of Bharatiya Janata Party (BJP) councillor Kanhaiya Lal.

After his complaint was clubbed with FIR No. 87/2020, Ahmad was not informed about it. He was also not apprised by the investigators about the progress in his case.

Advocate Shamshad said the clubbing of FIRs are always based on the gravity of the offense committed. “A complaint of such a serious nature where the victim has witnessed murders, assault, arson, rioting and intimidation cannot be clubbed with an FIR related to theft and mischief against unknown persons,” he told Newsclick.

He said the clubbing together of FIRs at the whims and fancies of the police could not be allowed. “I have observed that the police was hesitant in registering FIRs, especially when the complaints named the accused. And wherever the police has decided not to register an FIR in violation of principles of law, they clubbed them with registered FIRs. The police appeared to be very selective in registering as many FIRs as they wanted and at the same time, club many complaints with existing FIRs. This is fallacious,” he said.

However, the police said the FIR (No. 78/2020) was registered on March 2 on Aas Mohammad’s complaint. Ahmad’s hand-written complaint, which was received on March 4, was clubbed with the the FIR “as the date and place of incident was same”.

The investigators further said the allegation with regard to the killing of a veiled Muslim woman and her body being dumped into the Bhagirathi Vihar drain were found to be untrue. They said the arrested accused have been charge-sheeted under sections 147/148/149/427/436/454/380/188/34 of the IPC. The investigation is ongoing and if new evidence comes to the fore, a supplementary charge-sheet will be filed against other accused.

However, the police did not explain how they would probe Ahmad’s allegations, which are different from Aas Mohammad’s complaint in terms of the place, time and effect of the alleged crime and wherein the charge-sheet had already been filed.

The magistrate had concluded the probe into FIR No. 78/2020 would not cover a proper investigation into Ahmad’s complaint.

Mohammad Vakil, 52, who owns a grocery shop on the ground floor of his two-storey house in Gali Number 13, Shiv Vihar, lost his both eyes after acid was splashed on his face by armed rioters in the evening on February 25 last year. Later, his house was looted and set ablaze.

His wife Mumtaz Begum, 40, in her complaint against unknown people, urged the police to investigate those who poured acid on her husband’s face and looted and destroyed her house and properties.

Vakil’s case was clubbed with FIR No. 138/2020 registered at Karawal Nagar police station on the complaint of one Furqan, who had alleged that his car was burned by rioters. The FIR was filed under sections 147 (rioting), 148 (rioting, armed with deadly weapon), 149 (unlawful assembly), 427 (mischief causing damage to the amount of fifty rupees) and 436 (mischief by fire or explosive substance with intent to destroy house, etc.) of the IPC.

The house of Mohammad Salman, 29, in West Karawal Nagar was attacked by a riotous mob on February 25. The mob, which also allegedly comprised a few of Salman’s neighbours, barged into his house in the afternoon, ransacked and vandalised it, and threatened to kill its occupants.

The family of four, which included two children, first hid in a corner of the terrace and then jumped onto another terrace to escape the violence.

Initially, the police allegedly denied registering his case. They cops, as alleged, asked him to file his complaint without naming anyone. When he did not budge, his complaint was clubbed with an FIR filed by one Satyanarayan Dev, whose shop in the same locality was allegedly vandalised. Those whom Salman named in his complaint are allegedly threatening him to withdraw his case.

Interestingly, both cases that have been merged into one FIR are completely different from each other factually. Even a Delhi court had ordered the police to register a separate FIR based on Salman’s complaint, observing that the allegation leveled constitutes a separate cognisable offence.

However, the police has filed a revision petition against the court’s observation, arguing that the case does not merit a separate FIR.

Haji Hasim Ali’s two-storey house in Shiv Vihar was set ablaze by an armed mob on February 25. He lodged a complaint at Karawal Nagar police station, naming three of the attackers and claiming he suffered a loss of around eight lakh rupees.

However, his complaint was merged into an FIR (No. 72/2020) lodged by one Naresh Chand, who too had alleged that his home and shop was burned by a rioting mob. Instead of arresting those who had been named in his compliant, the police nabbed Ali for allegedly setting Chand’s house and shop on fire and put him behind bars. He walked out of jail on May 18 last year.

Notably, he became an accused in the same case in which he is also one of the complainants.

Even the court, coming down heavily on the Delhi Police for its “callous attitude” while conducting the investigation, had expressed its surprise on the police action.

“It is really strange that the complaint with regard to burning of house of respondent no 1 (Ali) was clubbed with the complaint of one Naresh Chand, being case FIR No 72/2020, PS Karawal Nagar and later on the respondent no 1 was arrested in the same matter, meaning thereby that he is not only complainant in the matter, but also an accused, which is an apparent absurdity,” Additional Sessions Judge Vinod Yadav had said on March 26 while hearing the matter.

Being mutawalli (care taker) of the Madina Masjid, he also had filed a separate compliant with regard to its desecration and burning at the hands of rioters. On February 25, two LPG cylinders were allegedly set on fire inside the mosque and a saffron flag planted on its minaret.

But the police did not find it necessary to maintain a case diary under Section 172 (diary of proceedings in investigation) of Criminal Code of Procedure (CrPC) in connection with their probe into the incident.

When the court sought to know from the investigation officer (IO), Sub-Inspector Suman, what he had found in the case during his investigation, he reportedly said that he had COVID-19 “at the time”. Dissatisfied with the reply, ASJ Yadav posed a battery of questions — who he interrogated, if he maintained a daily diary and if his “tongue had vanished”.

The IO’s reply was: “I did not do anything.”

The judge then said the complainant (Ali) has been in jail all this time and asked if he should write to the Delhi Police commissioner, mentioning that in riots cases where “an accused has been named, our officers have thought that investigation was not necessary?”

Merging complaints and registering a common FIR happens in cases related to riots, but the tagging should have a legal basis. However, in over a dozen cases reviewed by Newsclick, there seems to be a consistent effort to make the FIRs registered by a particular community completely ineffective. Many serious complaints have been tagged with non-serious FIRs and consequently the investigations into serious matters have become a non-priority.

When asked about the clubbing of FIRs of a different nature into one, a Delhi Police spokesperson said he would have to get details of the specific cases before making any comments on the same.

The probe being conducted by the city police in the February 2020 communal violence in the national capital has resulted in the imprisonment of several university students, the majority of them Muslims, and activists, has drawn severe criticism from several quarters.