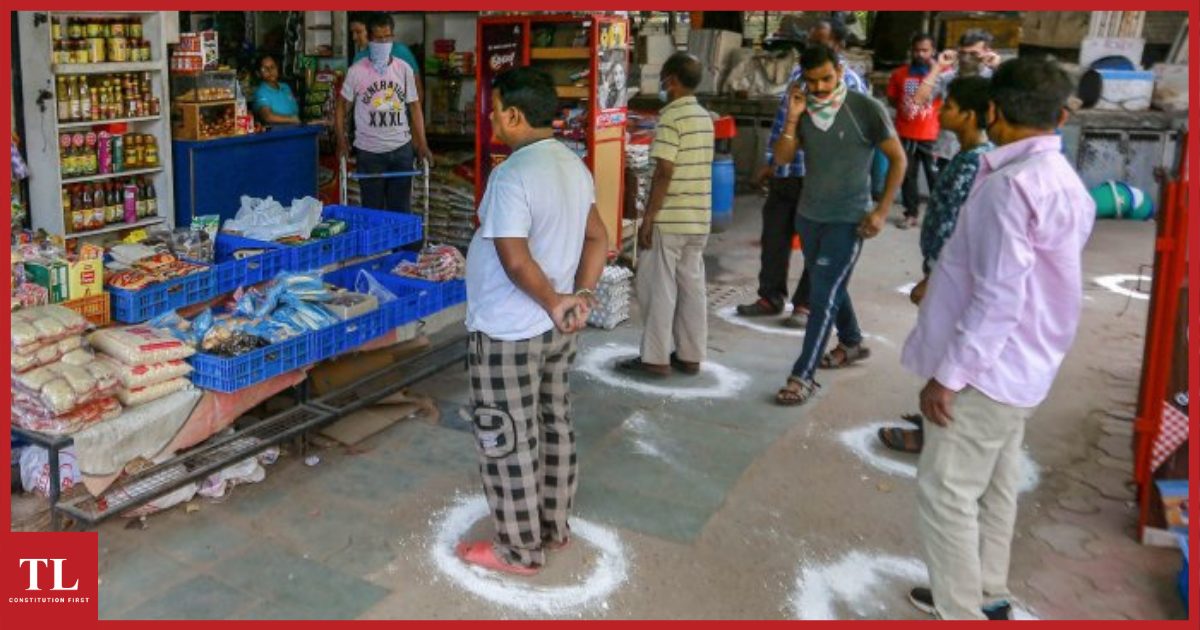 As the COVID-19 infection ravages the national capital, exposing critical gaps in healthcare infrastructure in the city in a situation that has necessitated imposition of shutdown measures, what worries 55-year old Praveen Kumar the most these days is only too hard for him to tell.

A street vendor by profession who used to set up a cold drink cart everyday near Delhi’s Lotus Temple, Kumar’s life has turned upside down ever since last year when a sudden nationwide lockdown was announced on March 25. Some hope of getting back on his feet knocked at his doors in October after resumption of the vending business near the prominent tourist attraction. However, his hopes have dashed this year, leaving Kumar in a precarious financial situation yet again.

“It’s been over two weeks since I have earned a single penny,” a dejected Kumar told NewsClick over phone on Monday. The national capital has been under a lockdown since April 19, as the Aam Aadmi Party (AAP) government, encumbered by the Centre, struggles to contain the fresh surge in infection cases in the city.

On Sunday, the restrictions on movement, in the face of a positivity rate that remains over 30% in Delhi, was extended for the second time by Chief Minister Arvind Kejriwal.

The virus-triggered lockdown measure has meant nothing but a further push to penury for myriads of street vendors in Delhi like Kumar, whose lives are marked with hand-to-mouth existence. This is notwithstanding the fact that a larger section of daily wagers in the city are going through a rather similar, if not worse, ordeal.

Moreover, if this is only a repeat of the harsh reality that was faced last year, this time the concerns don’t end here. Take, for instance, Kumar’s case, who had to scramble last month to find his uncle a bed in intensive care after the latter tested positive for COVID-19 and subsequently complained of shortness in breathing.

“He died last week because we were late in finding him proper care on time. Another uncle of mine is currently on oxygen support and is admitted in GTB Hospital. I, myself, am worried of contracting the infection and hence, avoid going outside. But how does one say ‘no’ to help their own relatives in such difficult times,” said Kumar, who stays with his wife and three daughters.

Dharmendra Kumar of the New Delhi chapter of Hawkers’ Joint Action Committee told NewsClick on Monday that his organisation had received over 175 calls from hawkers’ families in just last week – all making enquires about availability of oxygen cylinders, bed, or any drug among other medical supplies.

“This shortage is across the city and predictably the marginalised groups are the most affected. As far as street vendors are concerned, with most of them being migrants, there are not many people here whom they can approach for assistance – especially in today’s time when even the well-off groups are finding themselves helpless,” Kumar of the action committee said.

S N Kushwaha, treasurer of Centre of Indian Trade Union-backed Rehri-Patri Hawkers’ Union in Delhi, tended to agree. According to him, the distress calls in the wake of the recent surge in infection cases is different than last year when the nationwide lockdown had caused an exigency of above all, the food ration.

“Our union had to divert resources to respond to the requests of many of our members – street vendors – who are desperately looking to provide timely treatment to their infected kin,” Kushwaha said, adding that despite these efforts “not much of a help is possible.”

Incidentally, the general secretary of this hawkers’ union, Shakeel Ahmed, has also tested positive for COVID-19, Newsclick was informed on Monday, and himself had required oxygen support at home earlier last week. He managed to secure one cylinder, after much struggle, only through assistance from someone in Rajasthan.

“It is true that till now the unavailability of food hasn’t turned into an issue as yet, unlike last year,” Kumar of the action committee said. But with the lockdown being extended on a weekly basis and no solace from the positivity rate in Delhi, this won’t be the case for far too long.

“On our WhatsApp group, we today received a list, complied by our community leaders in different regions, of around 3,000 street vendors who are left with only few days’ ration and no savings,” he said.

Alerted by this, the joint action committee is now planning to restart its ration distribution drive on the lines of what had begun last year. “The only thing is that this time there are neither enough funds, nor many volunteers available with us,” said Kumar.

Last year, in the wake of sudden lockdown-induced distress, the Ministry of Housing and Urban Affairs (MoHUA) had launched a scheme for street vendors namely, PM SVANIDHI, which provided for a working capital loan of up to Rs. 10,000 to eligible vendors with no collateral.

In May last year, Finance Minister Nirmala Sitharaman had announced a Rs. 5,000 crore economic package for the same scheme that was targeted to provide relief to about 50 lakh street vendors.

According to the estimates shared by activists, the total strength of street vendors is close to four crore across the country.

While the numbers speak for themselves, a year later of when the scheme was launched, new circumstances are reinforcing the demands raised by experts all this while.

“The working capital scheme was conceptualised under the assumption that the loan would allow an individual to restart his/her vending business. Since the latter never took off, owing to lockdowns in almost all the major metropolitan cities, the loan has turned into another burden for the street vendor,” Kumar of the action committee explained.

Kushwaha of the hawkers’ union argued that due to the “increased fear” recently of contracting the infection, much of the vending business has also “dramatically” shifted to online platforms. “It was due to these reasons that we have been demanding a direct relief of Rs. 7,500 per month to all non-income tax payee families. This would have included street vendors too,” he said.

Kumar, on the other side, urged the Narendra Modi-led Central government to at least treat the disbursed “working capital loan” under PM-SVANIDHI as an “one-time cash assistance” now.

Newsclick had sent a questionnaire to Hardeep S. Puri, Minister of State (Independent Charge), MoHUA and Durga Shanker Mishra, Secretary, MoHUA. Response will be added in the report as and when it will be received.

To be sure, when asked on Monday, Srivastava, the fruit-chaat seller, informed Newsclick that he hasn’t yet applied for the loan under PM-SVANIDHI, nor is he planning to do so. “Many documents are required to apply for the loan. Plus, the amount is also too low. There’s no point – especially now when I don’t know when I’ll get to resume my business,” he said.

It’s not the same with Kumar, the cold-drink vendor, though, who had been sanctioned the loan three weeks ago but is yet to receive the amount. “Things changed for worse with another lockdown this year. I have not been touching the authorities for the disbursal of the loan since then,” Kumar said.

Why? “Because I am not ready to have another tension in my head – that is of repaying the loan.”