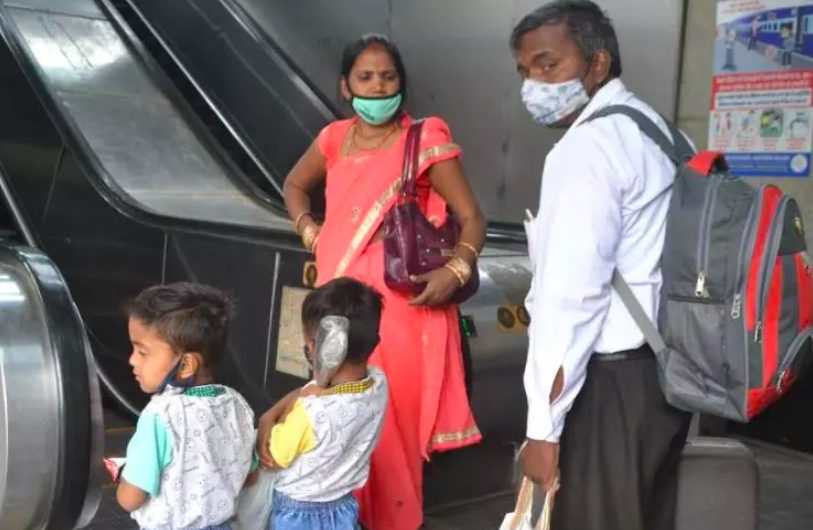 After dipping into his savings to survive the COVID-19 lockdown last year, Pappu Singh had finally begun to get his head above water again, earning between Rs 600-700 every day as a construction worker employed by a contractor.

He had saved enough to meet his family’s expenses for a few months at his native village of Karauli (near Gangapur) in Rajsthan’s Bhilwara district. After the savings were exhausted, he began doing odd jobs that used to fetch him between Rs 200-300 each day. However, his income was neither regular, nor enough to feed a family of five.

So, Singh headed back to the national capital two months ago with the hope of a better paying job and settled in at Mahipalpur. However, his hopes of getting a satisfying new job were short-lived.

Delhi Chief Minister Arvind Kejriwal announced a complete lockdown for a week from April 19 in a bid to control the surging COVID-19 pandemic, as patients continue to flock hospitals looking for beds and oxygen.

All construction and industrial activities were stopped, leaving lakhs of daily wagers jobless. Fearing a repeat of last year’s crisis, Singh, along with 11 others from the same village, once again left the city for his native place where, according to him,  “even death would be more dignified”. The harsh and sudden lockdown last year sparked an exodus of helpless and hopeless migrant workers from cities such as New Delhi and Mumbai, with them walking hundreds of kilometres to reach home.

“I don’t how I will face my family and children who had a lot of expectations from me. I also don’t know how I will pay back the sum I had borrowed for travel expenses and my family’s needs. I did not want to return even at the cost of my life, but staying here without any work is not affordable,” a visibly upset and distressed Singh told Newsclick at New Delhi Railway Station while waiting to board the Paschim Vihar Express. He was looking to board the unreserved coach in the train for which he had bought a ticket worth Rs 250. Boarding the coach is a herculean task, as express trains do not have more than one or two unreserved coaches — often not enough to accommodate a large crowd.

Singh, 34, is one among lakhs of migrant workers who constitute a part of the vast, unreported informal sector in India, which is primarily domestic demand-driven economy, estimated to make for half of the country’s economy. People in the informal sector mostly work without any contracts and are paid inadequate wages.

The second COVID-19 wave, which has been more devastating than the first wave, has brought incomes down further and exhausting the savings of people, at a time when the country is still struggling to recover from the undeclared recession caused by the pandemic-induced lockdown last year.

Government estimates suggest that India’s GDP (gross domestic product) decreased by 8% in the past financial year (2020-21). This shrinkage is considered to be the first such dip since 1952.

In view of the job and wage cuts and rising unemployment in the formal and informal sectors, economists are revisiting their forecast for the ongoing fiscal, with many of them seeing no chance of a double-digit growth.

After the new strain of the virus hit the country, the total number of infections has gone up to 2.3 crore — the death toll crossing 2.5 lakh so far. The crisis is estimated to worsen in the days to come as the infection has spread to rural areas.

Nand Kishor, 35, had been living in the city and working as a daily-wager for the past six years. He, along with his pregnant wife and a daughter, who is just over a year old, had returned to his village, walking over 500 km on foot, during the previous year’s exodus.

He stayed at home for a year and survived on work in agricultural fields or some small jobs in villages and towns.

“We are scarred by what we experienced last year. My wife, who was then expecting a baby, my small daughter and I walked on foot for four days and covered more than 500 km to reach my village. It was our worst nightmare. Therefore, learning from our previous experience, we are leaving the city before it is too late. The government will keep extending the lockdown. Starvation is more dangerous than COVID-19,” he said, waiting for the GT Express at the railway junction.

He said he had returned to Delhi a year later, just five months ago.

Ramesh Das, who had been working in a rubber factory, was set to leave the national capital with his entire family for his village (Saidpur) in Bihar’s Samastipur district in a jam-packed bus.

“The 2020 exodus of migrant workers has instilled a sense of fear among the poor and marginalised community, who only suffered, but were harassed and beaten up by the men in uniform. Though Kejriwal is appealing to us to not panic and leave the city, how can one survive here without any work? It (the lockdown) will last longer and people have understood that. Second, we are also scared of the virus, which spread here so fast. Villages are still safer. Even if we die there, we will at least get a dignified cremation,” he said.

Hearing a petition about this matter, the Delhi High Court on May 5 had directed the Delhi government to frame a scheme incorporating a structured response for home-based workers, self-employed and unorganised workers, as defined under the Unorganised Workers’ Social Security Act, 2008, within two weeks.

It had also directed the government to ensure that the process of registration of workers or migrant labourers be simplified and implemented .The court had asked the government to consider the plea seeking ex-gratia for unorganised and migrant workers.

Following the court’s order, Kejriwal recently announced that the Delhi government would e financial assistance of Rs 5,000 to each of the registered construction workers and had formed a committee to aid migrant workers after they began leaving the city in large numbers following the announcement of a week-long lockdown.

A large number of migrant workers from Jharkhand, Bihar, Uttar Pradesh and other states had thronged bus stops and railway stations fearing that the six-day lockdown announced by Kejriwal may get extended.