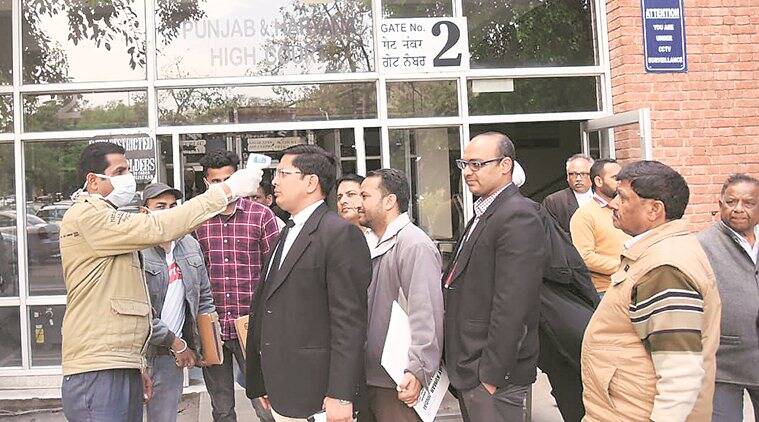 Covid-19: Did India’s Courts Run Just to Stay Where they Are?

Could the poor and disadvantaged access justice during and after the Covid-19 lockdown, when the courts restricted themselves to taking up only emergency cases? Courts and education institutions bore the brunt of the pandemic crisis, even as many other government and private institutions worked right through the lockdown, reports NEERAJ MISHRA from Raipur.

THE wheels of justice stopped turning in 2020 when millions of litigants found the doors of court-rooms locked to them. Though many believe that courts discovered their virtual avatar during the pandemic and resultant lockdown and restrictions on large gatherings, it is debatable if online hearings and appearances can ever replace or even approximate to a fraction of the real work done in physical court-rooms.

There are over three crore cases pending in various stages in all the courts across the country. A huge percentage of cases remained in limbo or suspended animation during the Covid-19 crisis.

Dates have been fixed for proceedings, and notes have been made on order-sheets, but little else oiled the wheels of the court-rooms. And yet courts and judges have been claiming that the rate of disposal of matters before them has not suffered.

Also Read: 2020: The Year Covid-19 Left its Indelible Footprint on the Judicial Landscape

There is no data to back this claim, and what data exists mostly pertains to how many cases a particular judge dealt with in a month. This includes certain classes of cases on civil and criminal matters. While courts have been “dealing” with these cases, it does not imply that a positive or constructive outcome, or decision, was reached in them. What may simply have happened is that the next date of a hearing or appearance, etc, is marked on order-sheets. This then becomes a part of the data on case disposal rate.

“Courts have been moving on jogging machines at least at the crucial district and magistrate levels. There has been a lot of motion and commotion on video, but factually little has been achieved as far as clients are concerned,” says a senior advocate in Raipur, Chhattisgarh.

Lawyers in the Chhattisgarh High Court at Bilaspur agree that almost all the work taken up in the past eight months consisted of bail applications.

Bail applications and urgent hearings were the only live courtroom activities. It is estimated that in Raipur alone there was an almost 200 percent jump in bail applications. This means there was a consequent improvement in the number of people who were released on bail. In a normal month, any judge in Raipur would receive about 10 bail applications in a day and, depending upon his view, almost eight applicants would be rejected in the first instance. Now, the rate of rejection has come down and the number of applications has gone up. These, of course, are criminal cases that have been pending for some time as very few new non-bailable warrants have been issued in recent months.

Courts had closed simultaneously when the first national lockdown was announced in March 2020, and they have since not fully opened. All constitutional and lower courts remained completely closed for the first two months, then they jerked into motion as “virtual courts”.

But even by August 2020, most district and mofussil courts around the country had barely acquired the know-how and capacity to deal with virtual court sessions. Even today, while courts and their staff might have become digitally capable, advocates and their clients are yet to acquire the same proficiency. So, clients were only informed of the next scheduled hearing through a text message or via other digital mediums. Lawyers in the lower courts say that only bail applications were being taken up through video calls. “Ninety-five percent [of applications] were rejected anyways, with clients left to approach the High Court.

If the High Court did grant bail then the ADJ [Additional District and Sessions Judge] courts would simply do the paperwork,” says Birendra Rao, an experienced advocate whose career is in the district courts.

Lawyers in the Chhattisgarh High Court at Bilaspur agree that almost all the work taken up in the past eight months consisted of bail applications. “I would not know exact statistics, but I am hopeful that the court treated these applications with sympathy especially keeping in mind the corona crisis,” says Lal Singh Thakur. In fact, in one case, Justice Sanjay Agarwal passed an order stating that bail conditions imposed upon by lower courts cannot be so stringent that they defeat the purpose of bail itself.

The long-term harm of a judicial system in suspended animation will begin to unfold as the courts reopen and active business resumes.

In Bhagwat Joshi Vs. State of Chhattisgarh, the High Court of Chhattisgarh gave the view that imposing forceful conditions for bail may lead to denial of bail which may further lead to violation of the fundamental rights of an accused under Article 21 of the Constitution. The Court had also noted that bail conditions must be reasonable.

Fortunately, India’s prison system has not fallen prey to the Novel Coronavirus. By and large, jails have remained free of the Covid-19 disease, and the reason could be the strict implementation of visiting rules. The hitch has been the inability of undertrials to access their lawyers, families and almost no virtual court facility in most district jails across the country.

Also Read: Challenges in Setting up Virtual and Online Courts in India

If there is one place where virtual courts can be a resounding success, it is at the penitentiary. Since the accused have to be produced before the court for bail applications, it can be done virtually from courtrooms where both advocates will be available. Bail cases do not require any evidence or cross-examination etc so it is mostly about the legal arguments which can be done virtually in almost all cases.

The High Courts can take this up with more clarity of purpose in coordination with state jail authorities.

With the doors closed on long winding revenue cases, most lawyers have been forced to shift their attention and clientele to the revenue system. The pressure of resolving all land-related applications and disputes has become greater on tehsildars to district magistrate as also the state revenue boards. Though lower in the hierarchy compared with civil courts, most clients have accepted this route if it means saving time, money, and effort.

Most small-town lawyers have also been forced to look for alternative sources of income. One of the ways, found by the more street-smart ones, was to resolve property disputes. As registration of new properties also took a hit initially, it forced a move towards general arbitration, family matters, insurance cases and dispute resolution at the police station level.

As for the clients, the conditions could not have been harsher. Closure of public transport for extended periods meant no-shows on court dates if they got any. They have had to retain their lawyers and occasionally pay them without actual work being done to keep their faith and maintain continuity. Those fighting stay orders on their property got no relief and those with kin in jails simply had to wring their hands in frustration.

The long-term harm of a judicial system in suspended animation will begin to unfold as the courts reopen and active business resumes. But for everyone, from law students to practitioners to judicial officers and clients, it has been a year when they took several steps backward.

(The author is a lawyer based in Raipur, Chhattisgarh. . The views are personal.)