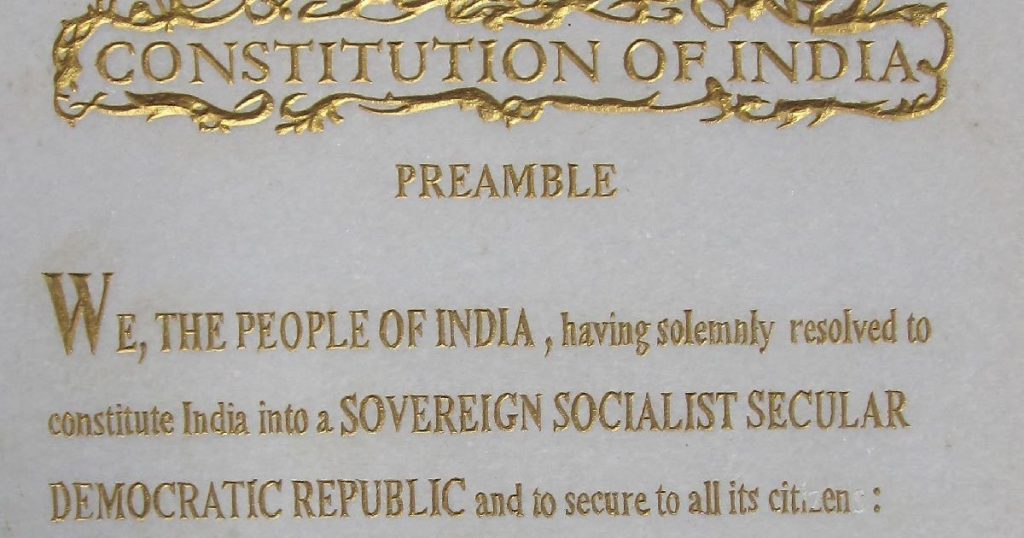 Constitution Day: Are ‘We The People’ Real?

On Constitution Day, we should be taking affirmative steps to make amends to ensure that women, tribals and the poor who have been ignored all these years are now included in our national narrative. We have to ask ourselves the question, whether our Constitution’s epithet, “We, The People of India” is in fact an honest proclamation, says PRATIK PATNAIK.

We celebrate November 26th as the “Constitution Day” of our relatively new republic and our ancient civilisation. The original commissioned copies of our Constitution have hand-drawn illustrations of India’s civilisational values and ideals from Bhagirath’s penance to Ganga’s descent; from Lord Ram’s return home to Akbar’s court.

Unfortunately, there is one ideal that is not only not illustrated but has also not been captured in the wordings of our Constitution: The idea of complete inclusivity. Inclusivity of the poor and marginalised, women and the tribal population in the Constitutional making process.

The preamble of our Constitution proudly proclaims, “We, The People of India”. Implicit in this phrase, is both a promise of inclusion and the claim that everyone together legislated this Grundnorm (the basic norm), in ‘our’ Constitution.

However, a closer look at the history of its making shall make it abundantly clear that the Indian Constitution was and still remains far from being completely inclusive. That it was only legislated by a few privileged property holders who had access to wealth and education, that too of a kind which passed the British muster.

The most satisfactory method obviously would be by election based on adult franchise but any attempt to introduce such a step now would lead to a wholly unacceptable delay in the formulation of the new constitution.

The Cabinet Mission, while discussing how the members of the future Constituent Assembly, who were to be mandated with the responsibility of drafting the new Constitution should be elected, made certain important observations. The Mission noted:

“In forming any assembly to decide a new constitutional structure the first problem is to obtain as broad-based and accurate a representation of the whole population as is possible. The most satisfactory method obviously would be by election based on adult franchise but any attempt to introduce such a step now would lead to a wholly unacceptable delay in the formulation of the new constitution. The only practicable course is to utilise the recently elected Provincial Legislative Assemblies as electing bodies”.

In all, the Constituent Assembly was to have 389 members, as many as 296 of them were to be elected from British India and 93 were to be representatives of the native States. The electoral process set out under the Government of India Act, 1935 (colonial legislation) to the Constituent Assembly itself, was laced with various infirmities resulting in only a partially representative body.

The Sixth Schedule of the Government of India Act, 1935 set out various qualifications for being able to vote for the provincial assemblies which in turn was to elect the Constituent Assembly.

Those qualifications excluded most of the adult population of the time, including the poor and marginalised, women and tribal population, both by default and design.

Take affirmative steps to make amends, so that at least now the people who were made to sit out at the time, are included. We have to ask ourselves the question, whether our Constitution’s epithet, “We, The People of India” is in fact an honest proclamation.

For being able to vote, one had to be a property taxpayer, an income tax payer and had to be literate, among other qualifications. Considering that India was, at the time, mostly a feudal setup and most of its population were illiterate, it is anyone’s guess how much of its population could have made the cut. How eerie that Delhi has had a penchant for prescribing difficult cut-offs since the time of independence!

Coming to women, their plight was even worse as they had to bear the brunt of not only satisfying the aforementioned qualifications but their fate was inextricably also linked to that of their husbands.

It may look like an anachronism now but their husbands’ franchise status determined their own. I’m not too sure if the waves of feminism had reached shores of India at the time since the multiple incidences of qualifications for women inter alia property, literacy, and husbands franchisee status, only made it worse and was a death knell for their own franchise.

Lastly, as misery also follows the trickle-down theory of economics, tribals were the most adversely affected by the criteria of property tax and literacy. Land rights amongst tribals and their form of education were, of course not congruous with that of the British and consequently, they were automatically excluded from the voting franchise.

The predicament of the tribal population of India at the time, can be summarized in this extract of a famous speech of a famous tribal leader, Jaipal Singh Munda, the “Jungli” of the Constituent Assembly, he said, “I rise to speak on behalf of millions of unknown hordes – yet very important – of unrecognised warriors of freedom, the original people of India who have variously been known as backward tribes, primitive tribes, criminal tribes and everything else, Sir, I am proud to be a Jungli, that is the name by which we are known in my part of the country. As a jungli, as an Adibasi, I am not expected to understand the legal intricacies of the Resolution. You cannot teach democracy to the tribal people; you have to learn democratic ways from them. They are the most democratic people on earth.”

The result was the document, our Constitution, expected to be followed by “all” while drafted only by a “few”. All qualified voters put together, only 28.5 percent of the adult population of the provinces could vote in the provincial assembly elections of early 1946. One prestigious website says it is 10.5% but the exact numbers are hardly relevant when an overwhelming majority of the population is excluded in any event.

WOMEN, TRIBALS AND THE POOR SIT OUT

Let me transport you to the Constituent Assembly where the idea of India was being debated upon. Lofty ideals of secularism, equality and democracy were being flaunted. Ganga, Gandhi and Gautam Buddha were being evoked and while all of this was happening, three important groups-the poor and marginalised, women and tribals were made to sit out.

We can brush it aside saying that it was the most pragmatic thing to do at the time and we had to work with whatever we had.

Alternatively, we can be less complacent and keep the spirit of questioning all assumptions, including our Constitutional scheme.

Take affirmative steps to make amends, so that at least now the people who were made to sit out at the time, are included. We have to ask ourselves the question, whether our Constitution’s epithet, “We, The People of India” is in fact an honest proclamation.

It is never late to do what is right. Civilisations perish or sustain depending on their ability to reform and evolve. My earnest prayer on this Constitution Day is for our legislators and “We, the People” to address the historic injustices in the constitutional making process.

(Pratik Patnaik is a Delhi based lawyer and constitutionalist. Views are personal.)