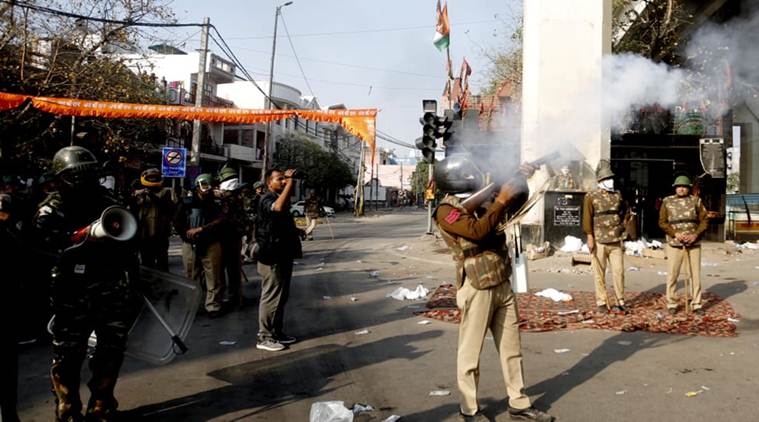 On 17 July, 2020, members from the civil society including former senior government officials, ambassadors, senior police officers, activists and academics, wrote a letter to the President Ramnath Kovind regarding the ongoing investigations of the incidents of communal riots that took place in North East Delhi on 23 and 26 February, 2020. The letter seeks free and fair investigation in order to trace and prosecute those who had instigated these riots.

The letter contends that the Delhi Police, who are investigating the matter, have allegations of being complicit to the violence caused in riots and also not acting in order to prevent violence in certain places. Further, the letter highlights in detail the instances in which the police refused to act and control the violence during the violence in North East Delhi.

The letter mentions clearly that several videos and accounts have emerged that substantiate the complicity of the police during the North East Delhi violence. These videos also record the police directing stone pelting mobs or simply pretending to look away while the violence perpetuated right in front of them.  “ Most concerningly, there is a video from the Khureji protest site of the Police breaking CCTV cameras at a petrol station raising serious concerns about its conduct. The links to these videos and accounts are given below. To our knowledge, no enquiry or investigation has been set up by the Delhi Police to probe the role of the policemen, despite these videos being publicly available and also being highlighted by the media.”  The letter said. Significantly, even after the passage of over four months, not a single FIR has been registered against the Delhi police.

On the topic of custodial torture, the letter strongly asserted the manner in which an accused named Shah Rukh was tormented during interrogation. Shah Rukh’s family alleged that they had to pay a bribe of rupees 10,000 in order to prevent the police from beating Shah Rukh during interrogation. “He was later made to sign a confession statement naming Devangana Kalita and Natasha Narwal of Pinjra Tod who are both under arrest, even though he says he doesn’t know either of them and he is not aware of the contents of the statement on which he signed as he couldn’t read it due to the injuries to his eyes.” the letter urged.

Making a very important point, the letter lays down the absolute inaction regarding the complaints against members of the BJP for their involvement in the violence in North East Delhi. “It is extremely concerning that the Delhi Police has refused to put nearly 700 FIRs registered by it in the public domain. In fact,it has not even made a summary of the FIRs available to citizens. This creates an asymmetry of information and thwarts all attempts at public scrutiny as only the Police knows which complaints and allegations are being pursued and which continue to languish.”, the letter said.

Another critical point that the letter highlights is the criminalization of dissent and protest. The letter describes, “The probe by the Delhi Police appears to be pursuing a line of inquiry criminalising the protests against the Citizenship Amendment Act (CAA)and portraying them as a conspiracy which resulted in the riots in Delhi.” Further, it is stated that the very chronology that the chargesheets narrate trace out the events in the sit- in protests across Delhi, in which activists had delivered speeches. The police narrative contends that these speeches were the build up to the riots that followed.

“The protests in the form of 24 hour sit-ins were legitimate, within the framework of the Indian Constitution and were an expression of those aggrieved by the CAA, NPR and NRC. The blocking of roads or chakka jam has a long history in India as an instrument of protest and has been adopted by various movements and even political parties at different points in time. Therefore, the criminalisation of this act and presenting it as part of a conspiracy by the Delhi Police is completely unwarranted.” The letter states.

It is also pointed out in the letter that activists and students have been unreasonably booked under the stringent provisions of the UAPA. this, the letter suspects, is an attempt in the direction of persecuting the accused persons through the investigation and trial process itself as it is practically very difficult to secure bail under these legislations.

The letter also mentions that the young people who were called in for protests were interrogated in a mala fide manner. The young protesters were allegedly intimidated and were even offered deals in giving statements against activists and those who were involved in the protests.

Declaring these contentions in detail, the letter insisted that the ongoing investigation of the North East Delhi riots did not inspire public confidence. Under the circumstances, the letter urged the President of India that a credible and unbiased probe was crucial to ensure public trust.

“The investigation cannot be allowed to become a fishing and roving expedition aimed at causing a chilling effect on dissent and protest in the country. We therefore call upon the Government of India to institute an inquiry into this investigation under the Commission of Inquiry Act, 1952, by appointing a sitting/retired judge(s) of the higher judiciary. Further, it must be ensured that officers accused of being complicit in the violence are not involved in the investigation by the Delhi Police.” The letter contended.

This letter was signed and endorsed by 72 signatories including prominent human rights defenders like Henry Tiphangne , Aruna Roy and several other retired civil servants, academic, social activists and scholars.