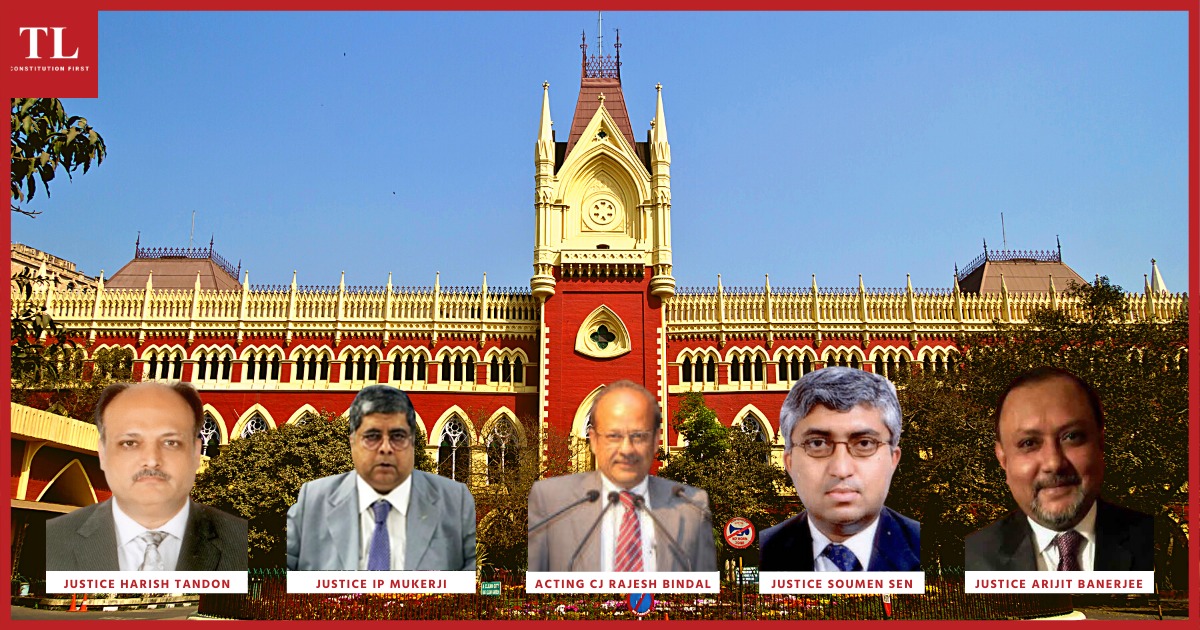 Analysing the letter addressed by Justice Arindam Sinha of the Calcutta High Court to all his brother judges at the court, that was revealed earlier today, expressing deep concern over the court’s recent orders regarding the arrest of the four All India Trinamool Congress leaders at the centre of the Narda case, and the order, in its wake, of a five-judge bench of the Calcutta High Court granting interim bail to the four-party leaders, INDIRA JAISING explains that the letter is indicative of the breakdown of institutional integrity at the High Court, and expresses hope that this is part of the judicial pushback against the same.

PROCEEDINGS in the High Court of Calcutta today began under the shadow of a letter addressed by Justice Arindam Sinha to the Acting Chief Justice Rajesh Bindal and all other judges of the High Court requesting, if necessary, a full court meeting to ensure that rules of the court be respected. His letter expresses concern for the credibility of the court, which had departed from its own rules in entertaining an email as a petition, contrary to the rules of the court. Only as recently as Wednesday, the Supreme Court had remarked that this was the first time it had seen a special bench being constituted to deny liberty, not to protect liberty.

In a brief hearing before the Calcutta High Court, which started at noon, the Judges themselves proposed and directed that the four arrested All India Trinamool Congress (TMC) leaders in the Narada case be granted interim bail while the wider issues in the case remain pending for a proper hearing. The four include West Bengal government ministers Subrata Mukherjee and Firhad Hakim, Member of the state legislative assembly Madan Mitra, and former Kolkata mayor Sovan Chatterjee.

The grant of bail is subject to the TMC leaders submitting a personal bond of Rs. 2 lakh and two sureties each. The TMC leaders must also give an undertaking that they will not speak to the media on either the case or issues relating to it. Failure to comply with these conditions would lead to the cancellation of bail.

Representing the accused, both Senior Counsel Dr. Abhishek Manu Singhvi and Senior Counsel Siddharth Luthra agreed to the conditions and submitted that the TMC leaders were seasoned enough to understand that there was no way that they could discuss the Narada case in the public domain while on bail.

It was once again left to Senior Counsel Kalyan Bandyopadhyay to raise the preliminary issue of whether the email which was entertained as a writ petition was maintainable at all. The judges agreed that the issue would be kept open.

Meanwhile, it has come to light that a sitting judge of the Calcutta High Court, Justice Arindam Sinha has addressed a letter dated 24th May to the Acting Chief Justice, along with the other judges of the Court, expressing his anguish over the damage done to the credibility of the High Court of Calcutta by virtue of the fact that all the High Court rules were given a go by in entertaining the email petition.

In particular, the relevant rules require that a petition seeking transfer of a civil or criminal case should be heard by a single judge. Whereas, a division bench heard the petition for transfer of the case from the trial court to the High Court in contravention of the rules.

The learned judge then goes on to point out that on the day the bail order was passed, there was no application for the same in the record of the court since the email communication was not supported by an affidavit as provided under Section 407(3) of the Code of Criminal Procedure, 1973. It is debatable whether an order of stay can be passed on such communication.

In his letter, Justice Sinha writes, “The Appellate Side Rules require a motion seeking transfer, either on the civil or criminal side, to be heard by a single Judge. However, the first Division Bench took up the matter treating it to be a writ petition. The application, if the communication made on 17th May, 2021 can be considered as one, is by the Investigating Agency/Prosecution against accused persons. It could not and was not treated as a Public Interest Litigation. Even a writ petition under Article 228 of the Constitution should have gone to the learned single Judge having determination. The communication could not have been treated as such a writ petition simply because no substantial question of law as to interpretation of the Constitution has been raised, as not recorded in order dated 17th May, 2021 nor the subsequently filed application. The mob factor may be a ground on merits, for adjudication of the motion, but could the first Division Bench have taken it up and continue to hear it as a writ petition, is the first question?”

He further states, “By operation of interim order dated 17th May, 2021, the accused persons continued to be in custody (jail) though they had obtained bail from designated Court. On that day when, on intervention of the High Court, said persons were deprived liberty, there was no application on the record of this Court, since the communication was not supported by affidavit, mandated by sub-section (3) in section 407, Code of Criminal Procedure, 1973. Whether the High Court exercising power in the matter of transfer of a criminal case, at that stage on its own initiative, could have passed the order of stay, is the second question? Sub section (6) under section 407 is the only provision for issuance of order of stay. It must be on the application for transfer.”

Justice Sinha goes on to point out that while a five-judge bench was constituted by the acting Chief Justice, the law required that when two judges differed it should be referred to a third judge. Hence, Rule 1 of Chapter 2 of the Appellate Side Rules of the High Court at Calcutta does not apply since Chapter 7 of the same requires a reference to a full bench.

What follows is an indictment of the court itself. Justice Sinha concludes the letter stating, “The High Court must get its act together. Our conduct is unbecoming of the majesty the High Court commands. We have been reduced to a mockery. As such I am requesting all of us to salvage the situation by taking such steps, including convening a Full Court, if necessary, for the purpose of re-affirming sanctity of our Rules and our unwritten code of conduct. It should include consideration as to whether by citing the COVID, we can stop coming to Court and conduct its business from wherever we are, our Court being a Court of record within the meaning of Article 215 of the Constitution. The accompanying question would be as to how we have made the rules of our conditions of service redundant, citing COVID-19.”

That a sitting judge felt it necessary to pen such a letter makes this an unprecedented event. It reflects a breakdown of institutional values.

Way back in the Supreme Court’s judgment in the case of Centre for PIL v. Union of India (2011) 4 SCC 1, a three-judge bench led by the then Chief Justice of India, Justice S.H. Kapadia considered whether an officer against whom a criminal case is pending could be regarded for the position of Central Vigilance Commissioner. The court held that “institutional integrity” required that no such person could be considered for such an appointment.

The concept of “institutional integrity” in that case was hailed as a measure of holding institutions accountable to their mandate strictly in accordance with the law. Surely, courts of record, including the High Courts and the Supreme Court, are also “institutions of integrity”, and must be held accountable to follow their own rules.

The letter indicates that institutional integrity has been seemingly eroded from within the Calcutta High Court by its inability to comply with its own rules.

Also read: ‘Either preserve the institutions that we envisioned to build or allow them to be undermined’: Anand Grover

Can judges hear matters over video conferencing from any premises?

More importantly, video hearings come with their problems. When judges are permitted to hear matters by video conferencing, the least that can be expected is that they hear matters from their courtroom, and if that too is not possible, then from their officially designated residences. A similar question arose when the then Chief Justice of India, Justice Sharad Arvind Bobde would hear matters via video conferencing from his personal Nagpur residence.

Questions have been raised that when the courts sit not in their designated courtroom, but in a different city, there is no way of ascertaining that the decision in question is not being influenced by persons not seen on the screen. Justice Sinha’s letter raises issues of the manner and method of hearing of a court of record and the seat of justice.

It may be recalled that the Acting Chief Justice of the Calcutta High Court, on the very first date of the hearing in the Narada arrestees’ bail matter, that is, 17th May 2021, was in Chandigarh, and he conducted the hearing from his residence. Can his personal residence in Chandigarh be considered the ‘seat of Justice’?

Political analysts have observed that while the Bhartiya Janta Party (BJP) might have won a significant number of votes and seats in West Bengal’s recently concluded legislative assembly elections, it lost the cultural battle. An election fought and won under the supervision of central forces controlled by the opposition party is quite an achievement for the TMC.

It is clear that the electoral approach of the BJP in West Bengal was not acceptable to the majority of the people of the state. One almost saw a cultural blockade against the BJP in West Bengal during the assembly elections. Several of those who crossed over to the BJP now want to come back. Those who have stayed with the BJP have been offered security cover by central forces, which some have refused as they suspect it is a form of surveillance.

The attack on state government minister Hakim has not been taken kindly by the people of the state. He was perceived by ordinary citizens as having done a fairly good job in COVID-19 relief management. What we seem to be witnessing is a pushback from the affected people of West Bengal, regardless of which party they belong to.

The legal pushback has come from the courts. It came first from Justice Arijit Banerjee who stood his ground and granted bail to the accused TMC quartet. It came next from the Supreme Court of India, where an appeal against Justice Banarjee’s order granting bail was not taken favourably. It has come now from the letter addressed by Justice Sinha to the Acting Chief Justice calling for a full-court meeting. There is reason to believe that his views reflect those of many other judges.

It came finally from the Court today deciding to grant interim bail to the TMC leaders, restoring the status quo ante as it existed on May 17.

The real pushback that needs to come from the court is to answer, via a reasoned order, the seven questions regarding the Calcutta High Court’s order staying the CBI court’s bail order that I raised in my earlier article Raising an alarm-This is not procedure established by Law.

The battle does not end with the TMC leaders getting bail. What we need to see is the restoration of the institutional integrity of the High Court of Calcutta and the judiciary as a whole.