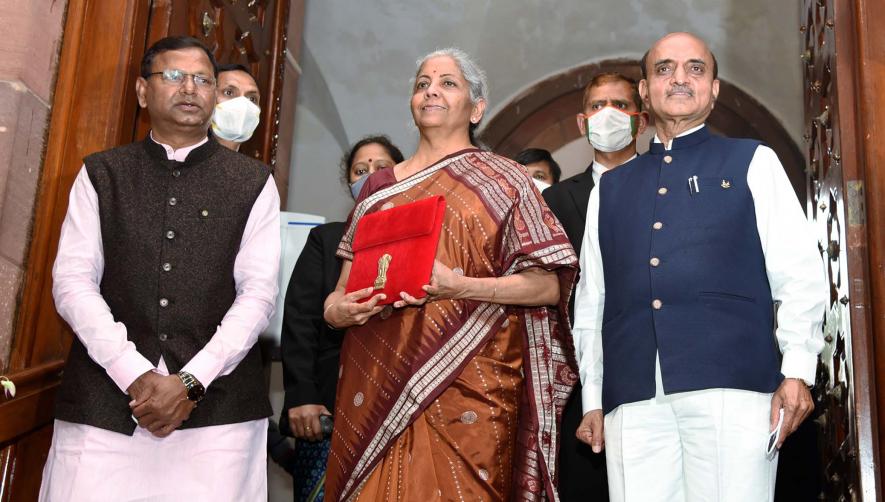 THE hype about a ‘big bang’ Budget evaporated quickly after Finance Minister Nirmala Sitharaman finished her presentation of the Union Budget for 2022-23 in Parliament on Tuesday. The hype centered around the expectation that her fourth Budget would be sprinkled with populist sops that would address the electorate in the five poll-bound states, including Uttar Pradesh — very soon. Instead, the Budget broke no fresh ground, nor showed any willingness to correct the course in a way that would address the widespread distress caused by the pandemic. In strategic terms, it bets heavily on a full blown economic recovery, unmindful of the extreme unevenness that characterises it.
The Finance Minister, known for her unusually long Budget speeches, gave the impression that the Budget had increased capital outlays, which would kickstart the economy. Indeed, both the Economic Survey as well as the Finance Minister mentioned that government expenditure in building capital assets would draw the private sector into the game.

But when the Budget papers became available, there was no indication that this was going to be anything significant. It revealed that the 35% increase in capital expenditure projected for the next financial year is clouded in uncertainty, depending on the manner in which the government undertakes capital expenditure.

Hidden in a footnote is the fact that almost 10% of the revised estimates of capital expenditures was because of the settling of debts that were owed by Air India. These are now held by a Special Purpose Vehicle, Air India Assets Holding Limited.

Capital expenditures are now projected to increase to Rs. 7.50 lakh crore in 2022-23. A further Rs. 3.17 lakh crore worth of assets are assumed to come from the Mahatma Gandhi National Rural Employment Guarantee Scheme (MGNREGS). The budget papers themselves have the caveat that the value of these assets, because of the scheme being demand-driven and entitlement-based, could well be off the mark. Being in the nature of grants-in-aid, any revenue shock may well jeopardise the creation of such assets.

The myth of a capital outlay boost

These allocations need to be seen with some skepticism, given the context of the government’s ill placed and fond hope that private investment would somehow flow in. The fact is that because private investment in road projects has not been forthcoming, the National Highways Authority of India has been forced to undertake projects on its own. This has resulted in it being heavily indebted. To make matters worse, a significant part of its road network is to be offered to private players under the National Monetisation Pipeline (NMP), which envisages the large scale leasing of national assets at deep discounts to private players.

The large scale investment by the government, knowing fully well that the assets built would be leased at discounted rates, points to an egregious disregard for prudential norms and propriety. Look at the warped logic of it all: the government’s justification was that it did not have funds to undertake an expansion of road networks and, therefore, had “monetise” existing road assets in order to mobilise resources. Who in his right mind would want to lease out existing assets while building new ones that are destined to be auctioned off later?

The case of the Indian Railways is slightly different. With great fanfare, the Narendra Modi regime unveiled a grand National Infrastructure Pipeline (NIP) in which the Railways was also included. The plan for the Railways was for an investment of Rs. 13.69 lakh crore over a six-year period, of which 87% — Rs. 11.90 lakh crore — was to come as budgetary support.

In every year since NIP was unveiled, budgetary support has been lagging the target that the Modi regime has itself set. In 2020-21, the  actual allocation made by the government was Rs. 1.09 lakh crore, when the NIP dictated an allocation of Rs. 2.28 lakh crore be provided as budgetary support for the Railways’ capital account — a shortfall of more than half.

In 2021-22, the revised estimates show that budgetary support amounting to Rs. 1.17 lakh crore is being made in the capital account. But even this pales into insignificance when seen in the context of the fact that a sum of Rs. 2.68 lakh crore needed to be provided as budgetary support for the expansion of its infrastructure as part of NIP.

In 2022-23, the allocation on the capital account for the Railways is projected at Rs. 1.37 lakh crore, while NIP had projected a requirement of Rs. 2.38 lakh crore for the year. Thus, the prolonged neglect of railway infrastructure, reflected in the niggardly contribution to India’s most important transporter, is a major bottleneck for its future expansion.

The Modi government’s penchant for shiny toys, like the Bullet Train, reflects a failure to engage with more basic questions: the shortage of rail tracks, which has resulted in severe congestion in the most import routes, the failure to modernise signaling equipment and every other facet of rail operations. The Budget, by throwing big numbers that are uprooted from context, is an exercise in smoke and mirrors.

The Budget’s neglect of large sections of ordinary people, reeling under the impact of a pandemic that has lasted more than two years, is also reflected in the allocations it has made. The allocation for the MGNREGS for 2022-23 has been scaled down by more than 25% over the revised estimates for the current year. In fact, the outlay for 2022-23 is 34% lower than the actual allocation made in 2020-21.
The scaling down of allocations for the only large-scale employment programme in the country was not entirely unexpected. Finance Ministry officials have in recent days been claiming that the “demand” for such employment in rural areas has been coming down; in fact, they used this as evidence of an ongoing recovery, reflecting the fact that people from the countryside, who went back home during and since the lockdown, are coming back to the cities and towns. This dubious claim does not sit well with media reports from rural India, which indicate that distress, especially the lack of wage employment, is still severely depressed in rural India.

Both the Economic Survey as well as the Finance Minister’s Budget speech addressed the issue of education in the time of the pandemic. Millions of school children have been thrown out of school, and are having to fend for themselves in what pretends to be online learning. There is widespread agreement that children’s education has suffered a serious setback that requires urgent correction in order to recover the “lost” years of their lives.

The Budget could have made a start, but guess what? The revised estimates for 2021-22 reveal that there were cuts in the Budget allocations made last year. The Finance Minister has allocated 15% t more than what she budgeted for this year, but if this year is any indication, this could well be written on water. Higher education, which has also suffered in the pandemic, fares no better. There is not even a hint that the government recognises the need for remedial action to enable millions who have lost ground in the pandemic.

The allocations for the Ministry of Health and Family Welfare also reflect a miserly attitude. Allocations for 2022-23 are, in real terms, lower than the revised estimates for the current year. Given the uncertainties of the pandemic, this is certainly an irresponsible course of action.

On the tax front, the numbers appear rosy at first glance. Net tax revenues of the Centre are higher by about 14% over the budgeted estimates for 2021-22 presented last year. But the fact that taxes are always termed in current prices, which is unaffected by the effects of inflation that is an ongoing Indian reality, affects this apparently rosy picture. For the record, the Centre’s tax revenue is projected to increase by about 9% in 2022-23. But in the context of inflation, this is by no means a strong enough buffer in uncertain times. Moreover, the unevenness of the “recovery”, especially among smaller businesses, and households that have lost incomes and jobs, means that a recovery is by no means guaranteed.

The projected increase in expenditure that the Finance Ministry officials have cited as laying the basis for a recovery, therefore, depends crucially on the revenues actually materialising.
This Budget’s unimaginative approach is a result of the Modi government’s ideological biases, which rule out more measures that would ensure a more durable and broad-based recovery. For instance, an obvious move for initiating a recovery of the investment cycle would have been to use public investments in public enterprises and undertakings, such as the Indian Railways. Investments in these undertakings would have ensured a more targeted approach toward ensuring a recovery, one that would have been more durable.

Given the fact that not every rupee spent has the same effect in initiating a recovery in these times, it would have made sense to spend it in ways that generate the maximum impact in terms of jobs incomes and livelihoods. In short, such a course would have ensured that the government got more bang for its buck. But who is to tell the powers that be that are bent on selling a chimera.