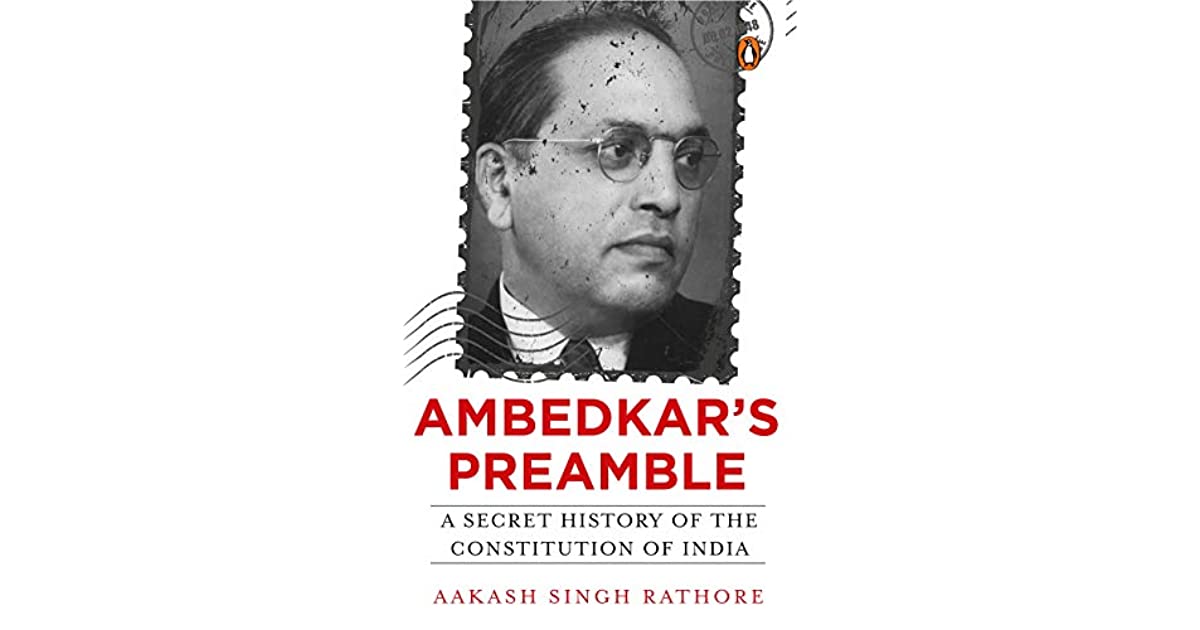 Book Review: Rathore’s “Ambedkar’s Preamble” reminds us to reawaken our passion for the Preamble

The Preamble reflects the lived experiences and philosophy of Ambedkar, and in doing so reminds us of its utmost importance even today, says  SARTHAK BHARADWAJ in Aakash Singh Rathore’s evocative book, “Ambedkar’s Preamble: A Secret History of Constitution of India” published by Penguin.

Before the novel coronavirus pandemic forced a nationwide lockdown, India was going through a period of social upheaval. Several demonstrations took place against the allegedly discriminatory Citizenship Amendment Act and the proposed National Register of Citizens on streets, universities and public places.

The common thread underpinning these demonstrations was the Preamble to the Constitution of India. News reports of students and members of civil society reciting the document poured in regularly.

The Preamble, for the first time in its seventy-year history, had become an integral part of public discourse and imagination.

So, in times where values envisioned by the Preamble are heavily contested, it is necessary to understand the history behind its framing and to locate the Preamble’s position in modern Indian constitutionalism. In this politically charged arena, where Constitution is the season’s flavour, comes Aakash Singh Rathore’s brilliant new book – Ambedkar’s Preamble: A Secret History of Constitution of India.

He argues that the Preamble is fundamentally an Ambedkarite Preamble and that it is wrongly attributed to Nehru’s Objectives Resolution or to B.N. Rau.

The book explores six key aspects of the Preamble – liberty, justice,  equality, fraternity, nation and dignity – to radically challenge conventional wisdom around the authorship of the Preamble.

In this analytically dazzling account, Rathore gives readers unparalleled access to the story behind the Preamble’s formation. He argues that the Preamble is fundamentally an Ambedkarite Preamble and that it is wrongly attributed to Nehru’s Objectives Resolution or to B.N. Rau. This hitherto ignored exploration of the Preamble’s undisclosed history, also sheds light on Dr. Ambedkar’s life and how his lived experiences translated into a vision for India’s Constitution.

The book opens by debunking the claim that Nehru’s Objectives Resolution was the driving force behind the Preamble. Rathore writes that on July 22, 1946, an Experts’ Committee was tasked by the Congress Working Committee to prepare a document outlining the goals for the future Constituent Assembly. This committee included stalwarts like Nehru, KT Shah, K.M. Munshi, Humayun Kabir, N. Gopalaswami Ayyangar and Dr. Ambekdar. Five months later, the declaration that was drawn by this committee was moved – with cosmetic changes – by Nehru in the Constituent Assembly as the Objectives Resolution and it took on historic significance.

While Gandhi’s ‘Hind Swaraj’ was founded on the idea that modern India must move towards localised and independent villages as centres of powers, Ambedkar saw localism burdened by practices of caste that disabled individual agency.

Rathore explains that unlike Nehru or B.N. Rau, each central concept of the Preamble had substantive prominence in Ambedkar’s writings and speeches. ‘Justice’, for instance, has been described in the book not merely conceptually, but as an encapsulation of Ambedkar’s lifelong struggle to eradicate social, political and economic inequalities from India.

Rathore chronicles Ambedkar’s early life to understand what ‘justice’ truly meant to him and the precise reason for its inclusion in the Preamble. Long before the idea of labour rights emerged, Ambedkar successfully led a struggle in 1942 to reduce working hours from twelve to eight. In 1939, when discourse around sexuality was considered taboo, Ambedkar’s Independent Labour Party wanted a ‘birth control’ policy for poverty alleviation.

Another fascinating dimension of the book is its erudite analysis of competing visions for India held by Gandhi and Ambedkar. While Gandhi’s ‘Hind Swaraj’ was founded on the idea that modern India must move towards localised and independent villages as centres of powers, Ambedkar saw localism burdened by practices of caste that disabled individual agency. Thus Ambedkar wanted power to be associated with modern democratic institutions.

The history of the Preamble, in many ways, is also the history of Dr. Ambedkar. The Preamble and its foremost author, both, sought to emancipate the people of an emerging republic and transform the Indian society by enforcing the Constitution.

In Ambedkar’s view, by locating authority at the centre, the tendencies of a backward society could be opposed. Thus, to keep Swaraj from becoming oppressive for backward classes, Ambedkar’s liberty was preconditioned on achieving freedom for all citizens.

The most striking discussion in the book, invariably proving the Ambedkarite origins of the Preamble, in my view, is based on the discussions on ‘nation’.

According to Ambedkar, believing that the then India, divided into several castes, was a nation, was to “cherish a great delusion.” To achieve a sense of nationhood, certain inalienable conditions must be fulfilled and one such condition was assuring the dignity of an individual. Therefore, the fraternity clause of the Preamble reads: “Fraternity, assuring the dignity of the individual and the unity of the Nation.”

It is unfortunate that the Preamble today is perceived only as a document of utopian ideas.

That the Indian Constitution gives precedence to the individual over the nation, is an extraordinary feature of Indian constitutionalism. Rathore opines that this concession was for two reasons. First, as the clause shows, fraternity secures, “the unity of the nation and not some romantic sense of a Nation that was delusionally believed to offer us fraternity.” Second, “unless the dignity of the individual is assured, the nation can not be united.”

However, some of Rathore’s observations conflict with existing literature on the subject.

One such observation is about the inclusion of the non-justiciable Directive Principles of State Policy (‘DPSP’) into the constitutional text. Rathore suggests, “the main components of economic justice, and many of social justice were relegated to the Directive Principles (from Fundamental Rights) as they were considered too controversial for other binding sections of the Constitution.”

However, Madhav Khosla in his book, “India’s Founding Moment”, says that the primary purpose for including DPSP was to prevent legislators from exercising powers without a conception of socioeconomic welfare. He writes, “The codification of the directive principles would expose both the ruler and the ruled to the proper exercise of power.” Thus, while Rathore holds inclusion of DPSP as a relegation of those rights which could not be made fundamental or justiciable, Khosla claims DPSP to be a pedagogical experience, necessary to educate both, citizens and the State.

The history of the Preamble, in many ways, is also the history of Dr. Ambedkar. The Preamble and its foremost author, both, sought to emancipate the people of an emerging republic and transform the Indian society by enforcing the Constitution.

It is unfortunate that the Preamble today is perceived only as a document of utopian ideas. Aakash Singh Rathore, through his book, wishes to reawaken the lost passion for the Preamble and the values it espouses.

(Sarthak Bhardwaj is a law student at VIPS, IP University. Views are personal.)