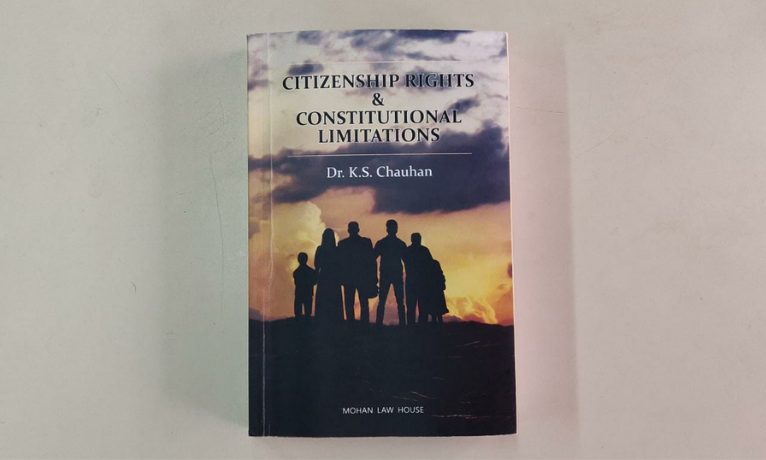 CITIZENSHIP has been a divisive subject in Indian politics since even before the Union came to be. It was the subject of numerous debates in the Constituent Assembly. It has continued to dominate the political discourse in India. When Parliament passed The Citizenship (Amendment) Act, 2019, widespread protests broke out across the country. TV news debates, online portals, newspapers, and social media were flooded with op-ed and explainers about CAA.

For the first time in their lives, a whole generation of Indians was learning about citizenship, and the law surrounding it.

While citizenship was being discussed, much of the discourse was superficial. Most of the conversation around citizenship circled the past decade or so, and very few felt it important to go back and appraise the history and evolution of the law of citizenship in India. Through his book ‘Citizenship, Rights and Constitutional Limitations’, Dr. K. S. Chauhan aims to change that.

It is the latest publication of Mohan Law House. Dr. Chauhan is an advocate practicing primarily at the Supreme Court. He completed his LL.B. and LL.M from Delhi University. He was awarded Ph.D. By Maharishi Dayanand University Rohtak Haryana. He has previously published a well-known treatise titled ‘Parliament – Powers, Functions & Privileges’.

He also focuses on the provisions of the Citizenship Act, 1995. The chapter dealing with this is rich in substance and manages to cover all relevant subjects related to the 1995 Act. It also covers various amendments to the Act, the Assam Accord, the National Register of Citizens, the National Population Register, and explains how the Supreme Court has shaped the law around citizenship. One may perhaps argue that this is the most important chapter of the book considering that the challenge to the Citizenship Amendment Act, 2019 is still pending before the Supreme Court.

Chapter IV titled ‘Human Rights and Fundamental Freedoms’, provides an excellent overview of the law relating to the subject. It lucidly explains the rights and guarantees promised under the constitution and various conventions. It also examines the history and law around women’s rights, child rights, and migrant rights movements. The author also covers the history and role of various institutions which are tasked with the protection of rights both domestically and internationally.

A chapter that deals with ‘Rights and Constitutional Limitations’ explores the origins of the law and introduces readers to various historical events and landmark cases that helped develop the law into what we know it as today.

The author explains the principles of Equality, Liberty, and Fraternity and touches upon the subject of reservation in detail. It not only analyses case law, but also offers statistics and other secondary material to enable the reader to develop a more contextual understanding of the subject. It also touches on important aspects of free speech, minority rights, and the relationship between the constitution and secularism.

As a whole, the book has a coherent flow. Contrary to the initial impression of it being a mere repetition of the general law of citizenship, the book takes a refreshing relook at not only the law of citizenship but also a varied range of subjects that emanate from the main theme of the book.

Unlike most books in contemporary times, this one strives to provide the historical origins behind the various elements that constitute citizenship and the law around it. The book also helps develop a deep understanding of the first principles of constitutional law.

Legal points are argued and explained from a real-world viewpoint, therefore making them more digestible. When it comes to research, the book is a goldmine. It succinctly summarises various landmark decisions, not only by the Supreme Court of India but also by various other Constitutional Courts around the world. It examines judicial opinions in the light of historical events and adds socio-political context to law.

The book uses simple language, is well-edited, and has been written not only to cater to the needs of a subject expert, but also the layperson. The book will be sought after by members of the Bar, Bench, policymakers, journalists, research institutions, libraries and law students. The book is priced at Rs. 1099/-

(Hamza Lakdawala is a researcher and writer from Mumbai, India. He is currently a Research Associate at the Chambers of Senior Advocate Indira Jaising. He tweets @hamzamlakdawala.  The views expressed are personal.)