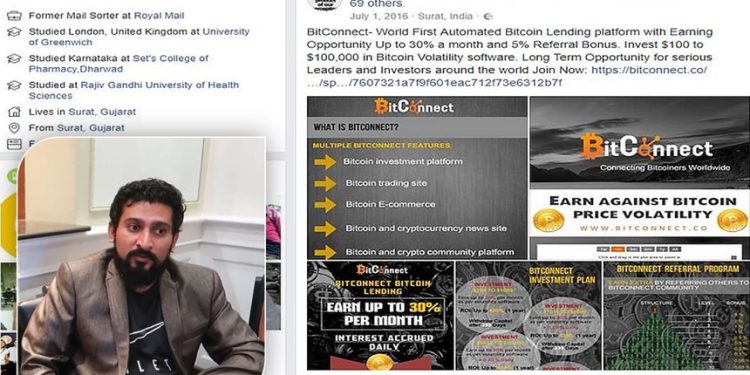 A federal grand jury in San Diego charged Satish Kumbhani, founder of BitConnect, with orchestrating a global Ponzi scheme. He is accused of conspiracy to commit wire fraud, commodity price manipulation, operation of an unlicensed money transmitting business, and conspiracy to commit international money laundering. BitConnect is an alleged fraudulent cryptocurrency investment platform that reached a peak market-capitalisation of US$3.4bn (billion).
Citing court documents, a release from the US department of justice (DoJ) says, Satish Kumbhani, from Hemal in Gujarat misled investors about BitConnect’s ‘Lending Program’. Under this program, Mr Kumbhani and his co-conspirators touted BitConnect’s purported proprietary technology, known as the ‘BitConnect trading bot’ and ‘volatility software’, as being able to generate substantial profits and guaranteed returns by using investors’ money to trade on the volatility of cryptocurrency exchange markets.
However, as alleged in the indictment, BitConnect operated as a Ponzi scheme by paying earlier BitConnect investors with money from later investors. In total, Mr Kumbhani and his co-conspirators obtained about US$2.4bn from investors, the court documents say.
The indictment further alleges that Mr Kumbhani abruptly shut down the lending program after operating for around one year. “Mr Kumbhani then directed his network of promoters to fraudulently manipulate and prop up the price of BitConnect’s digital currency, a commodity known as BitConnect Coin (BCC), to create the false appearance of legitimate market demand for BCC,” the release says.
In 2016, he created and developed BitConnect as a blockchain where BCC was the native token. He registered for the three initial BitConnect websites with fake names and developed the lending program.
DoJ further says, Mr Kumbhani and his co-conspirators also concealed the location and control of the fraud proceeds obtained from investors by co-mingling, cycling and exchanging the funds through BitConnect’s cluster of cryptocurrency wallets and various internationally-based cryptocurrency exchanges.
According to the indictment, to avoid regulatory scrutiny and oversight of BitConnect’s cryptocurrency offering, Mr Kumbhani evaded US regulations governing the financial industry, including those enforced by the Financial Crimes Enforcement Network (FinCEN).
For example, although BitConnect operated a money transmitting business through its digital currency exchange, BitConnect never registered with FinCEN, as required under the Bank Secrecy Act.
“Crime, particularly crime involving digital currencies, continues to transcend international boundaries,” says assistant attorney general Kenneth A Polite Jr from the justice department’s criminal division. “The department is committed to protecting victims, preserving market integrity, and strengthening its global partnerships to hold accountable criminals engaging in cryptocurrency fraud. We thank our partners around the world for their continued efforts.”
“This indictment alleges a massive cryptocurrency scheme that defrauded investors of more than $2 billion. The US Attorney’s Office and our law enforcement partners are committed to pursuing justice for victims of cryptocurrency fraud,” says Randy Grossman, US attorney for the southern district of California.
According to Ryan L Korner, special agent in charge of the IRS criminal investigation (IRS-CI)’s Los Angeles field office, as cryptocurrency gains popularity and attracts investors worldwide, alleged fraudsters like Mr Kumbhani are utilising increasingly complex schemes to defraud investors, frequently stealing millions of dollars.
“However, make no mistake, our agency will continue our long tradition of following the money, whether physical or digital, to expose criminal schemes and hold the fraudsters accountable for their illegal acts of trickery and deceit,” he added.
Mr Kumbhani is charged with conspiracy to commit wire fraud, wire fraud, conspiracy to commit commodity price manipulation, operation of an unlicensed money transmitting business, and conspiracy to commit international money laundering. If convicted of all counts, he faces a maximum penalty of 70 years in prison.
A federal district court judge will determine any sentence after considering the US sentencing guidelines and other statutory factors. The BitConnect founder is absconding.
The FBI Cleveland field office and IRS-CI are investigating the case.
All investor victims of the BitConnect fraud are encouraged to visit the webpage to identify themselves as potential victims and obtain more information on their rights as victims, including the ability to submit a victim impact statement, the release says.
First published by Moneylife.in