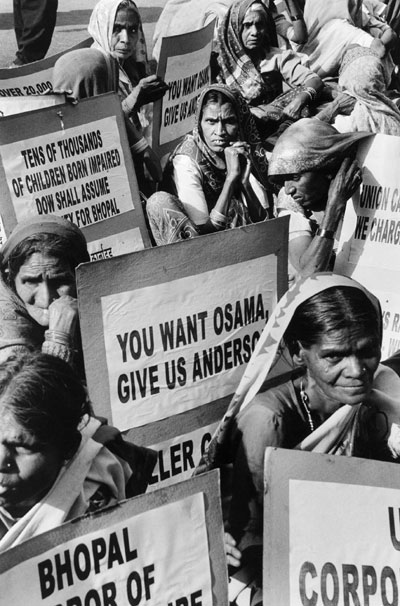 Thirty-six years after the horrific gas leak, Union Carbide’s defunct pesticide plant continues to contaminate soil and groundwater. Urgent remedial action must be taken to stop this, writes N.D. JAYAPRAKASH, Co-convener of the Bhopal Gas Peedith Sangharsh Sahayog Samiti (BGPSSS). In a two-part series, THE LEAFLET analyses the issues that have haunted the victims.

Was there more to the Bhopal Gas Disaster than the leaking of methyl isocyanate (MIC) gas from the pesticide plant of Union Carbide India Ltd (UCIL)? The tragedy on the intervening night Of December 2-3, 1984, left at least 5295 dead (unofficial figures put the toll at 25,000) and 558,125 casualties. It was by far the worst industrial disaster in history. Before Bhopal, in April 1942, the Benxihu Colliery explosion in China was the most catastrophic that claimed 1,549 lives.

Given the scale and magnitude of the tragedy, investigations for over a decade after the accident primarily focussed on the MIC leak. It was much later that attention turned to the effects of hazardous chemicals, other than MIC and its derivatives, which may have contaminated areas around the UCIL factory much prior to the gas leak in 1984.

In fact, it came to light only in the latter half of the 1990s that the slow poisoning of soil and groundwater through the dumping of toxic waste in and around the pesticide factory began as far back as 1969. That was the year UCIL started operations in Bhopal. This revelation came while organisations supporting the cause of the Bhopal gas victims (henceforth referred to as ‘victims’ organisations’) were pursuing the criminal case against the Union Carbide Corporation (UCC), UCIL and accused officials of these companies.

One of the three petitions filed before the Chief Judicial Magistrate (CJM), Bhopal on July 4, 1994 to expedite cases against the accused related to a news report about the attempt by the UCIL management to surreptitiously dismantle and move machine parts and other usable items from its Bhopal plant. The petitions were filed by the following victims’ organisations: the Bhopal Gas Peedith Sangharsh Sahayog Samiti (BGPSSS), the Bhopal Group for Information and Action (BGIA) and the Bhopal Gas Peedith Mahila Udyog Sanghathan (BGPMUS).

The petitioners’ plea was that the UCIL management’s action amounted to tampering with vital evidence and that the management should be restrained from any dismantling. The intervention by the petitioners proved useful although the CJM dismissed the petition on the ground that the case against UCIL was then pending before the Bhopal Session’s Court.

But before the petition was disposed, pressure from the victims’ organisations compelled the Madhya Pradesh government to order the Madhya Pradesh Pollution Control Board (MPPCB) to inspect the closed UCIL plant. This exercise revealed that 44 metric tonnes (MT) of residues generated during the manufacture of the pesticide “Sevin” and 2.5 MT of another chemical, alpha naphthol, collected in drums, troughs and bags were stored in open areas within the plant premises.

Subsequently, MPPCB constituted an Expert Committee in July 1994 to advise the Board on the treatment and safe disposal of the waste and toxic chemicals. The Committee visited the factory in May 1995 and recommended the shifting of the hazardous wastes to a safer site within the premises. It also stressed the need for exploratory studies to evaluate various treatment and disposal alternatives. The Indian Institute of Chemical Technology (IICT), Hyderabad, and the National Environmental Engineering Research Institute (NEERI), Nagpur, were retained by the MPPCB to conduct the studies.

Meanwhile, the MPPCB had also approached the CJM, Bhopal, for permission to shift the residues to a safer place within the plant premises. The Court sought the views of the CBI investigating the gas leak case. The agency approached the Ministry of Environment and Forests for advice. Consequently, the Ministry (vide Order No. F. No. 11-2-/96 – HSMD dated January 3, 1997) constituted another three-member Expert Committee with representatives from NEERI, IICT and MPPCB who visited the plant on October 15, 1997. The Committee observed that the drums and bags with hazardous chemicals were in a dilapidated condition and any attempt at shifting them outside the plant may result in spillage. It also observed that the residues after melting were spreading on the floor and outside the shed in which they were currently stored.

The victims’ organisations became aware of these facts from the copy of the Expert Committee’s inspection report submitted by the MPPCB to the CJM, Bhopal. One startling observation in the report caught their attention. To quote: “During the rainy season, the hazardous waste that had spilled may contaminate the water and spread to other areas.” This officially confirmed apprehensions expressed by victims’ organisations that for nearly three decades hazardous waste from the UCIL factory were leaching into the groundwater and contaminating it.

In fact, in 1996, the Bhopal Group for Information and Action’s (BGIA) report titled The Toxic Legacy of Union Carbide in Bhopal had pointed out that during the operation of the factory between 1969 and 1977 all the effluents were dumped in an open pit near the eastern boundary wall of the plant. And from 1977 to 1984, the effluents were discharged into the Solar Evaporation Ponds (SEPs) constructed outside the northern boundary wall. The SEPs were lined with a film of polythene to prevent seepage. However, its effectiveness against a complex mix of corrosive substances was questionable.

The Committee observed that the drums and bags with hazardous chemicals were in a dilapidated condition and any attempt at shifting them outside the plant may result in spillage. It also observed that the residues after melting were spreading on the floor and outside the shed in which they were currently stored.

Under the circumstances, the report noted that it was inevitable that toxins from the SEPs would have contaminated the groundwater in adjoining areas. Interestingly, BGIA had begun expressing apprehensions about this danger as early as 1990 when findings of tests carried out on soil and water samples from the vicinity of the closed UCIL plant had shown the presence of highly toxic and carcinogenic substances. Moreover, according to the Bhopal Gas Peedith Mahila Udyog Sanghathan (BGPMUS), for several years hutment-dwellers residing near the UCIL factory had been complaining about the poor quality of drinking water drawn by hand-pumps and tube-wells.

Taking all these factors into consideration in May 1999, at the initiative of BGIA and BGPMUS, Greenpeace International carried out an investigation of the former UCIL site. Samples of soil were collected both from areas once used for waste disposal and from areas around the former Sevin Plant in the factory, where a ruptured and leaking storage tank was found. Groundwater samples were also collected from several wells located in the shanty settlements near the factory.

Analysis of the samples for heavy metals and organic contaminants was carried out at the Greenpeace Research Laboratories based in the University of Exeter, UK. The findings, titled The Bhopal Legacy , was released in November 1999. It indicated substantial and, in some locations, severe contamination of drinking water and soil with heavy metals and persistent organic contaminants.

According to the survey, samples collected from a drain directly beneath the former “Sevin” (carbaryl) formulation plant “contained free mercury at over 12 percent of the overall weight of the sample (between 20,000 and 6 million times higher than might be expected as background).”

The Greenpeace study further pointed out that: “Chromium, copper, nickel and lead were also present at elevated levels. The toxic organochlorines ‘hexachloroethane’ and ‘hexachlorobutadiene’ (HCBD), common constituents in solid wastes arising from the chlorinated chemical industry, were also found.”

The contamination was caused either during routine processes when the plant was operational from spillage and accidents or due to continued and ongoing release of chemicals from materials dumped or stored on site. To understand the full extent of the ongoing contamination, the study recommended that a more detailed and extensive survey be conducted urgently.

The Greenpeace report also pointed out that it was essential that steps be taken to reduce and eliminate further exposure of the communities surrounding the defunct plant to hazardous chemicals. For this the Report suggested the following:

“Contaminated wastes and soils must be safely collected and securely contained until such time as they can be effectively treated. Such treatment must entail the complete removal and isolation of toxic heavy metals from the materials and the complete destruction of all hazardous organic constituents. The treatment process selected for the purpose must operate in a closed-loop configuration, such that there is no release of the chemicals or their hazardous by-products into the environment.

The Greenpeace report also pointed out that it was essential that steps be taken to reduce and eliminate further exposure of the communities surrounding the defunct plant to hazardous chemicals.

“For contaminated groundwater, the ultimate goal should be the remediation of the aquifers. This may be achieved in part, by state-of-the-art filtration technology, which traps both volatile and semi-volatile organic contaminants, allowing their isolation, storage and treatment. In the short term, however, the priority and responsibility of the Government must be to provide clean drinking water to the communities and to prevent access to contaminated wells. Urgent action must also be taken to prevent further contamination of aquifers through proper containment of chemicals and contaminated materials both on and surrounding the site.”

The message was loud and clear. The impact of UCIL’s Bhopal plant on the environment and the health of the people residing in its vicinity had to be checked. For that a detailed action plan had to be drawn up and implemented, failing which new victims will be added to UCIL’s defunct pesticide plant in Bhopal.

(To be continued in Part 2)

(N D Jayaprakash is co-convener of the Bhopal Gas Peedith Sangharsh Sahayog Samiti (BGPSSS), an organisation working for the rights of the victims of the 1984 Bhopal Gas Tragedy.)