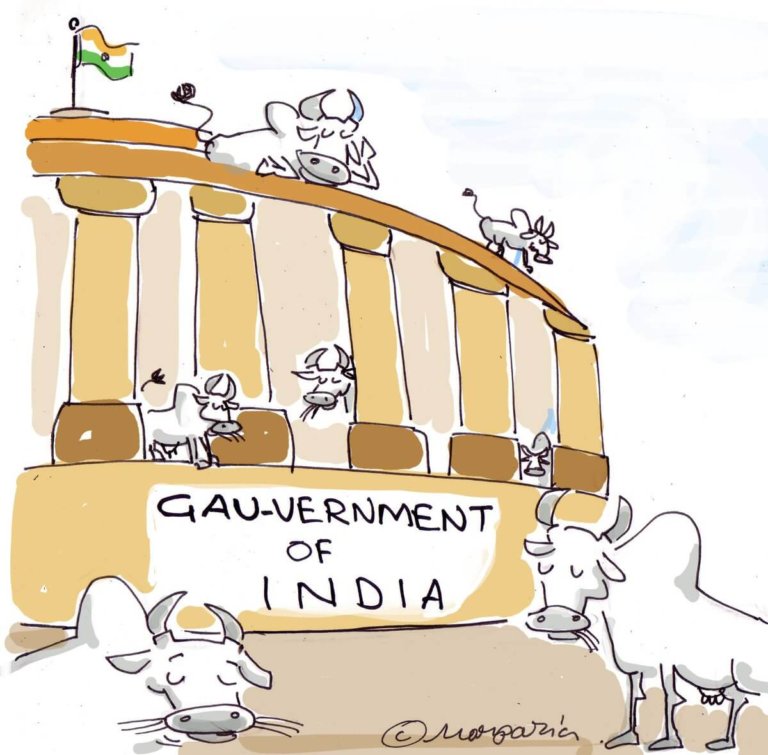 Ban on trade of cattle for slaughter, does the Centre have the power?

The Prevention of Cruelty to Animals (Regulation of Livestock Markets) Rules, 2017 were notified by the Central Government, ostensibly to regulate animal markets all over India.

The term ‘animal market’ is defined in Rule 2(b) as

“a market place or sale-yard or any other premises or place to which animals are brought from other places and exposed for sale or auction and includes any lairage adjoining a market or a slaughterhouse and used in connection with it and any place adjoining a market used as a parking area by visitors to the market for parking vehicles and includes animal fair and cattle pound where animals are offered or displayed for sale or auction.”

The owner of cattle has to provide a written declaration furnishing his/her details, with photo ID proof, the identification details of the cattle, as well as an undertaking that the cattle has not been brought to market for sale for slaughter [Rule 22(b)]. A similar obligation is placed on the purchaser, wherein she is barred from selling the cattle for slaughter, and has to follow the State cattle protection or preservation laws under Rule 22(e).

In this context, Rule 2(e) defines ‘cattle’ as “a bovine animal including bulls, bullocks, cows, buffaloes, steers, heifers and calves and includes camels.”

In effect, the Regulation of Livestock Markets Rules prohibit the buying and/or selling of all cattle, including buffaloes, in the animal markets for the purpose of slaughter. It is argued in justification that mainly unfit or diseased animals are brought to the animal market for slaughter, resulting in the risk of spread of infectious diseases amongst healthy animals. Thus, the Rules ensure that only healthy animals are traded for agricultural purposes, while animals for slaughter can be bought directly from the farms/farmers, in order to ensure traceability. So these Rules do not prohibit slaughter of cattle per se, but only regulate the animal markets to ensure that cattle are not traded for slaughter.

“The question is whether the Central Government under the Prevention of Cruelty to Animals Act, 1960 is empowered to do this?”

Regulation of market committees including market committees for cattle are State subjects, hence the Central Government has no power to legislate on the subject, much less through the Prevention of Cruelty to Animals (Regulation of Livestock Markets) Rules !  These Rules were enacted under Sections 38(1) and (2) of the Prevention of Cruelty to Animals Act, 1960 (PCA Act), though there is no specific rule making power vested in the Central Government to regulate animal markets.

It appears that the current Rules have been framed under the directions of the Supreme Court in Gauri Maulekhi vs. Union of India. The petition in any event sought only the prevention of export or trafficking to Nepal for ritualistic slaughter of all animals ; hence that petition cannot be used as a justification for these Rules. There is no mention of prevention of export of animals in these Rules.

Laws on cattle slaughter are outside the legislative competence of Parliament, since the preservation and improvement of livestock is covered under Entry 15 of List II (preservation, protection and improvement of stock and prevention of animal diseases; veterinary training and practice). The Rules are ultra vires the powers of the Central Government, as the subject matter of the Rules in pith and substance, to the extent that it seeks to regulates markets, is not within the Competence of the Centre but the States. That apart, the Central Government has sought to do by delegated legislation what it can do only by a law dealing with trade and commerce, namely restrict the fundamental right to business and trade.

The Rules themselves require compliance with the State cattle Protection or Preservation laws [Rule 22(e)(ii)] implying thereby that those laws continue in force and do not stand amended by these Rules.

The PCA does not prohibit slaughter of animals for human consumption. In fact, Section 11(3) (e) makes an explicit exemption by stating;

Thus, the Act clearly provides that the slaughter of animals is permitted for the purpose of food for human consumption, provided it does not cause unnecessary pain or suffering. Accordingly, the Prevention of Cruelty to Animals (Slaughter House) Rules, 2001 has been framed, which lays down detailed guidelines on how animal slaughter should take place, with minimum pain or suffering, and the operation of slaughter house.

Thus, Rules 22(b)(iii) and 22(e)(i) which prohibit the seller from bringing a cattle to animal market for slaughter and the buyer to purchase the same for the purpose of slaughter is in conflict with and totally contrary to Section 11(3)(e) of the PCA, 1960.

It is clear that the Centre has chosen a back door method of preventing the slaughter of cattle on an all India basis, bypassing local and state laws.

Even if one were to give the benefit of doubt to the government that the intent of the Rules is to regulate animal welfare, why welfare only of cattle? The PCA is meant for all animals, defined in Section 2(a), PCA as “any living creature other than a human being.”

If the idea is to regulate animal markets by prohibiting diseased animals from being sold there for the purpose of slaughter, then the same principle can be applied to other animals , like pigs, sheep, poultry, etc. That selective approach gives away the story and makes it clear that this is nothing more than the universalisation of Hindutva agenda through the back door.

The argument is that for the purpose of slaughter, cattle can be sourced directly from the farms/farmers , resulting in better tracking and adherence of safety standards. However, this fails to take into account that rural farming economy is substantially dependent on the local animal markets, where buying and selling of animals is fundamental to the trade. In an animal market, buyers and/or sellers have the freedom to negotiate the prices, to have a wide range of options to choose from, as well as impose other conditions, if needed. By removing the animal markets from the supply chain from where cattle can be sourced for slaughter, including buffalo, one is severely limiting the options before both farmers and buyers, who could them for economic reasons, stop engaging in cattle breeding altogether. Further, it will deal a body blow to the beef industries as well as to other ancillary trades, which are heavily dependent on buffalo.

If the intention of these Rules is to protect animals from cruelty, then they ought to regulate the dairy industry first, wherein the maximum exploitation of cattle exists.

The Rules have come in the backdrop of lynching of bona fide traders of cattle by cow vigilantes, gau rakshaks since no trader can bring her cattle to animal markets for the purpose of slaughter. Similarly, no buyer can purchase cattle for slaughter from animal fairs. It is argued that now Rules will provide for mandatory registration of animal markets as well as proper documentation of cattle traders and the cattle itself, it can be contended that these will result in less violence and harassment of cattle traders by the vigilante groups. However, that may not be the case, as was evident in Pehlu Khan’s case in Alwar, a dairy farmer who was lynched for ‘smuggling cows’ on 1st April, 2017 and died two days later, despite having valid purchase documents. The issue is even if sellers and/or buyers have documents showing that they are transporting cattle for agricultural purposes, there is no guarantee that this will satisfy the cow vigilantes.

Violation of fundamental right to trade under Article 19(1)(g)

These Rules constitute a direct interference with the farmers and non-farmers’ fundamental right to trade, as guaranteed under Article 19(1)(g), and not protected under the reasonable restriction of  ‘in the interests of general public’ under Article 19(6) of the Constitution.