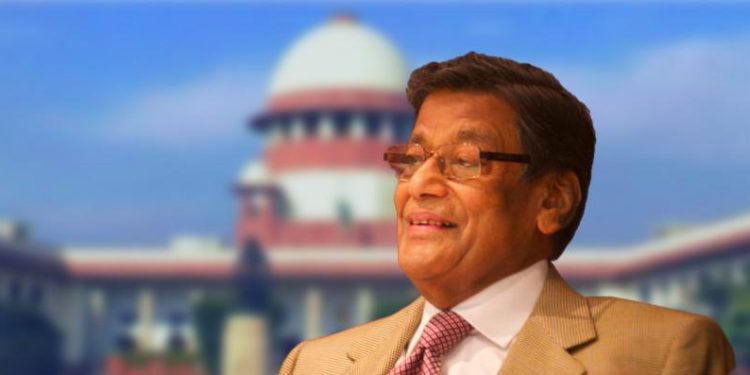 As AGI suggests ban on discretionary land allotments by state governments, a recap of the legal precedents

K.K. Venugopal, the Attorney General for India [AG], on Tuesday told the Supreme Court that discretionary land allotment in urban areas to politicians and judges should be stopped. He said that elected representatives like Members of Parliament [MP], Members of Legislative Assemblies [MLA] and members of panchayats, bureaucrats, and even judges of High Courts and the Supreme court should not be allowed to avail the benefit of discretionary quota. The statement came a week after the Supreme Court asked the AG to submit proposed guidelines in relation to the allotment of land to housing societies.

The AG made this statement in the ongoing case of State of Telangana vs. Rao V.B.J. Chelikani & Ors. This issue was raised in an appeal filed by Andhra Pradesh in the Supreme Court back in 2010, now being pursued by the Telangana government. In 2008, a plea was filed in the Andhra Pradesh High Court to challenge the alienation of land that was allotted to multiple housing societies that mostly comprised of MLAs, MPs, Indian Administrative Service, Indian Police Service and Indian Revenue Service officers, and other influential people. The High Court in 2010 set aside multiple orders issued by the government in which residential plots were allotted to such persons in these housing societies.

The AG suggested to the Supreme Court that a separate statute is required to oversee the allotment of land by state governments. He added that those exercising State power, such as judges and politicians, should not be allowed to avail discretionary quota or allotment of land owned by the government. Furthermore, only those residing or born in urban areas should be eligible for the benefit of such allotment, he told the court.

The AG’s intervention follows his bid to end the malpractice in the use of urban land by the elites. This practice has also caused a tremendous loss to the urban development authorities in India and to the public exchequer. In a bid to permanently stop the malpractice, he mentioned that “the qualification of eligible persons and categories of eligible persons for land allotments must be clearly and exhaustively spelt out in the statute itself, without leaving room for the executive to add categories by  way notification”.

The AG had earlier this month told the Supreme Court bench comprising the Chief Justice of India, N.V. Ramana, Justice A.S. Bopanna and Justice Hima Kohli that the arbitrary allotment of land by state governments to individuals like politicians, judges, bureaucrats, journalists, and others, in return for favours, must be prohibited. He targeted housing societies that were being run by influential people holding political power. He had insisted on having a uniform land allotment policy that could be made effective all over the country. Additionally, he claimed that he knew a Chief Minister of West Bengal who had allotted land to his driver.

Also read: Eminent domain doctrine in India and the lack of due process

Discretionary allotment of land by states and public officials

According to Schedule 7, List II, Entry 18 of the Indian Constitution, the subject of rights in or over land fall under the State List; therefore, authority pertaining to land vests in state governments. Legislative policies regarding land differ from state to state, sometimes raising questions over the rights of individuals and the legality of policies drafted by the state governments.

In 2008, a plea was filed in the Andhra Pradesh High Court to challenge the alienation of land that was allotted to multiple housing societies that mostly comprised of MLAs, MPs, Indian Administrative Service, Indian Police Service and Indian Revenue Service officers, and other influential people. The High Court in 2010 set aside multiple orders issued by the government in which residential plots were allotted to such persons in these housing societies.

For decades, states have often transferring government land to powerful individuals for political motives or other non-public interests. Certain quotas or subsidies meant for the economic and socially backward classes have been manipulated and fraudulently used for the personal gains of those holding public offices. This was also observed by the Supreme Court back in 2017. The Supreme Court had issued an order regarding the arbitrary allotment of land in Telangana, stating, “[I]n the last few decades of the history of the Republic, it so happened that the policies of different states in this regard varied from state to state and even with reference to an individual state from time to time. It led to a lot of litigation creating uncertainties over the rights and obligations of the individuals and questions regarding the legality and propriety of the policies of an individual state”.

Over time, many states and their functionaries have been accused of allotting land to powerful individuals or at times to the relatives of those in public office through questionable policies. Such policies have also raised questions of corruption, favouritism and nepotism in the day-to-day functioning of states. Since there is no uniform set of guidelines to align and control the arbitrary allotment quota of the state, the authority that they hold is rife for misuse.

In E.P Royappa vs. State of Tamil Nadu (1974), the Supreme Court made it clear that no kind of arbitrariness should be seen in the actions of the State. Reasonableness is an important part of state functions which must be duly followed. Article 14 of the Constitution is instrumental in removing arbitrariness of the State.

Another arbitrary allotment of land was observed last year in Odisha in the case of State of Orissa vs. Pratima Mohanty (2021), where public officials had allotted land to their relatives. The Supreme Court, setting aside the Odisha High Court’s judgement, said that the allotment of land had been done for personal motives. The allotment had caused a major loss to the Bhubaneswar Development Authority and the public exchequer. The Supreme Court bench comprising Justices M.R Shah and B.V. Nagarathna had remarked in this case that public interest should remain the top priority in such allotments.

Similar views were also held by the Supreme Court in its judgments in the cases of Akhil Bhartiya Upbhokta Congress vs. State of Madhya Pradesh and others (2011) and Centre for Public Interest Litigation vs. Union of India and others (2016), in which it was held that when a state is allocating land, grant, permit or license, it has to take due care in ensuring the distribution in “fair and equitable manner”. The decision should not be maligned by the elements of nepotism or favouritism.

A similar arbitrary and fraudulent transfer of government land was observed by the Madurai Bench of the Madras High Court in February last year, which upheld the cancellation of a land that was allotted to a family in 1974. The family was handed over the land under the category of ‘landless poor’. The high court found that there existed no records of such allotment and it was assigned fraudulently.

In Adinarayanshetty vs. Principal Secretary (2021), the Karnataka High Court quashed land allotment to a trust that was run by Parliamentarian Umesh G. Jadhav’s wife. The division bench comprising of Acting Chief Justice Satish Chandra Sharma and Justice Sachin Shankar Magadum declared that the land was allotted through favouritism and the motive was personal gain. Due procedure and prescribed rules were not followed in allotting the land, the bench had held.

Since there is no uniform set of guidelines to align and control the arbitrary allotment quota of the state, the authority that they hold is rife for misuse.

The courts have not just adjudicated matters pertaining to allotment of land, but also in relation to government residences. One such case is Lok Prahari vs. State of Uttar Pradesh (2018), in which the Supreme Court held that a Chief Minister falling under the ambit of Section 4 of the Uttar Pradesh Ministers (Salaries, Allowances, and Miscellaneous Provisions) Act, 1981, is only allowed to occupy the CM residence for 15 days after they are demitted from the office. UP ex-Chief Ministers Residence Allotment Rules, 1997, that allowed ex-CMs to occupy government residences for rest of their lives, was held ultra vires Article 14 of the Indian Constitution and contrary to the provisions of 1981 Act. It held that the state cannot declare the previous office holders as an elite category that is entitled to the government benefits in perpetuity.

In a similar case in 2019, the High Court of Rajasthan said that natural resources, and properties like land and residences belong to the citizens of this country. ‘Doctrine of Equality’ is an important guiding principle for the distribution of these resources. The high court held that residences and bungalows built for the public officials are already scarce; therefore, allotting them to ex-officials for lifetime will be violative of Article 14.

The AG has made it clear that discretionary quotas and allotments should be applicable only for the weaker sections of the society. He suggested that, “Land could be allotted free of cost to the weaker and deserving sections of the society. Free/subsidised land could be allotted to certain categories, such as ex-servicemen, war widows, disabled persons and such like categories”. The quotas meant for these categories are essential because these ultimately help them to overcome the historical oppression and tragedies that they have been facing so far.

AG Venugopal suggested that there should be a ‘high powered authority’  that should closely monitor allotments of land made by the government to public officials. If the authority finds a government guilty of an illicit transfer, it will have to take back the allotted land without providing any compensation to the person who benefitted out of the land by using it or constructing infrastructure.

Except the individuals who will fall under special categories for land allotment, all the other categories must pay the price of the land as assessed in accordance to the market value.  The AG has suggested that there should be a ‘high powered authority’  that should closely monitor allotments of land made by the government to public officials. If the authority finds a government guilty of an illicit transfer, it will have to take back the allotted land without providing any compensation to the person who benefitted out of the land by using it or constructing infrastructure. Furthermore, he remarked that such transfers have to be made in deference to legislation, and not executive policies.

(Gazal Preet Kaur is a fifth year B.A., LL.B. (Hons.) student at the Rajiv Gandhi National University of Law, Patiala, Punjab, and an intern with The Leaflet. The views expressed are personal.)