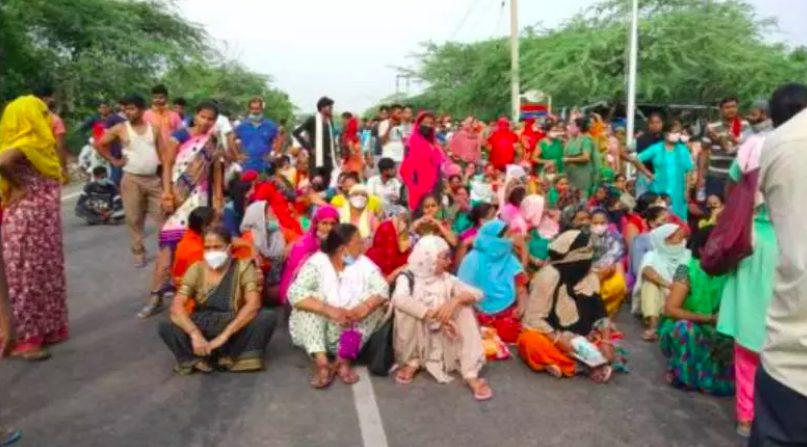 In the midst of the raging COVID-19 pandemic’s deadly second wave the Supreme Court on Monday had ordered the clearing out of all encroachments on Aravalli forest land, including in Khori village set on the outskirts of Faridabad.

The SC’s order directed the Municipal Corporation of Faridabad to remove all encroachments consisting of around 10,000 residential constructions housing close to one lakh people saying land grabbers cannot take refuge in the rule of law and speak of fairness.

While the court has ordered the clearing of the land, residents of the village, largely migrant workers, find themselves anxious over losing a roof over their heads at a time when the pandemic has already claimed lives and their means of survival.

In a bid to oppose the order and demand rehabilitation and accommodation the residents had also staged a protest on June 11. However, about 100 persons now face charges for raising their voice while others were detained. Charges against the residents include Sections 109, 114, 147, 149, 186, 188, 269, 283, 341 and 506 of the IPC, and Section 61 of the Disaster Management Act.The residents had gathered on the main road raising slogans against the state government and municipal corporation authorities.

“On behalf of several people’s organisations that are involved in housing rights across the country, we requested the Deputy Commissioner and Commissioner of Municipal Corporation of Faridabad and the Chief Minister, Haryana Government, to shift all the people of Khori village to a transit camp. Fifteen people from Khori village were detained by the police, out of which six people — Gowada Prasad, Mohammad Salim Ansari, Pappu Pradhan, Imamuddin, Keemkhan, and Ramdas — were produced before DCP Faridabad and sent to jail. Human Rights Advocate Siyaz and Advocate Vinod have reached the DCP office for bail for these laborers.” said Nirmal Gorana, General Secretary, Bandhua Mukti Morcha.

On the question of their accommodation the court told Colin Gonsalves, the petitioner representing the residents, that the question was being raised by land grabbers. “First the forest land has to be cleared. Don’t give us Covid excuses. File a compliance report. It may be a case where some people are hand-in-glove with the encroachers,” it said.

The court has also ordered  state and local police to give necessary logistical support to enable the corporation to implement directions given by the court to evict the occupants/encroachers, including by forcible eviction from the subject forest land and to clear all the encroachments therefrom.

Speaking to Newsclick on the condition of anonymity, a petitioner said: “The situation is dire for the residents. In a bid to clear out the houses authorities have also snapped water and electricity supply. We are trying to get legal recourse in place but this is the state of workers in the middle of the pandemic.”

The anxieties of residents continue to rise with their voices being suppressed and no clear means of rehabilitation in sight. While the date for the demolition has not been finalised as yet, many fear that demolitions are scheduled to take place next week.

Explaining the situation on the ground, Shamsher, a construction worker living in Khori village for over 25 years, said, “The situation is extremely precarious for us; with no means of survival for the past one and a half years we find ourselves in deep poverty. Now the roofs over our heads will be taken away. We respect the court of law and are ready to leave our houses too, but we want to be rehabilitated.”

“The village comprises migrant workers who had made this land their homes almost 25 to 30 years ago. Where was the administration when this land was being sold to us? Where were they for over 20 years and now in the midst of the pandemic our homes will be taken away. We will be forced to camp out under a tarpaulin shed on the streets,” he stressed

“There are four families living in my house with 11 minors. Where will we take them?”

A  letter has been issued by activists demanding the provision of shelter to the families of Khori in the transit camp and their rehabilitation. The letter was sent to the Ministry of Women and Child Development, Government of India, with the help of all the mass organisations in the interests of about 25,000 children who are below 18 years of age, who can be saved from a coming third wave of COVID-19.

“There is a need for a dialogue between the administration and the residents of Khori, which can be done well by the District Magistrate of Faridabad and its municipal corporation,” said Nilesh, a social worker from the Basti Suraksha Manch.