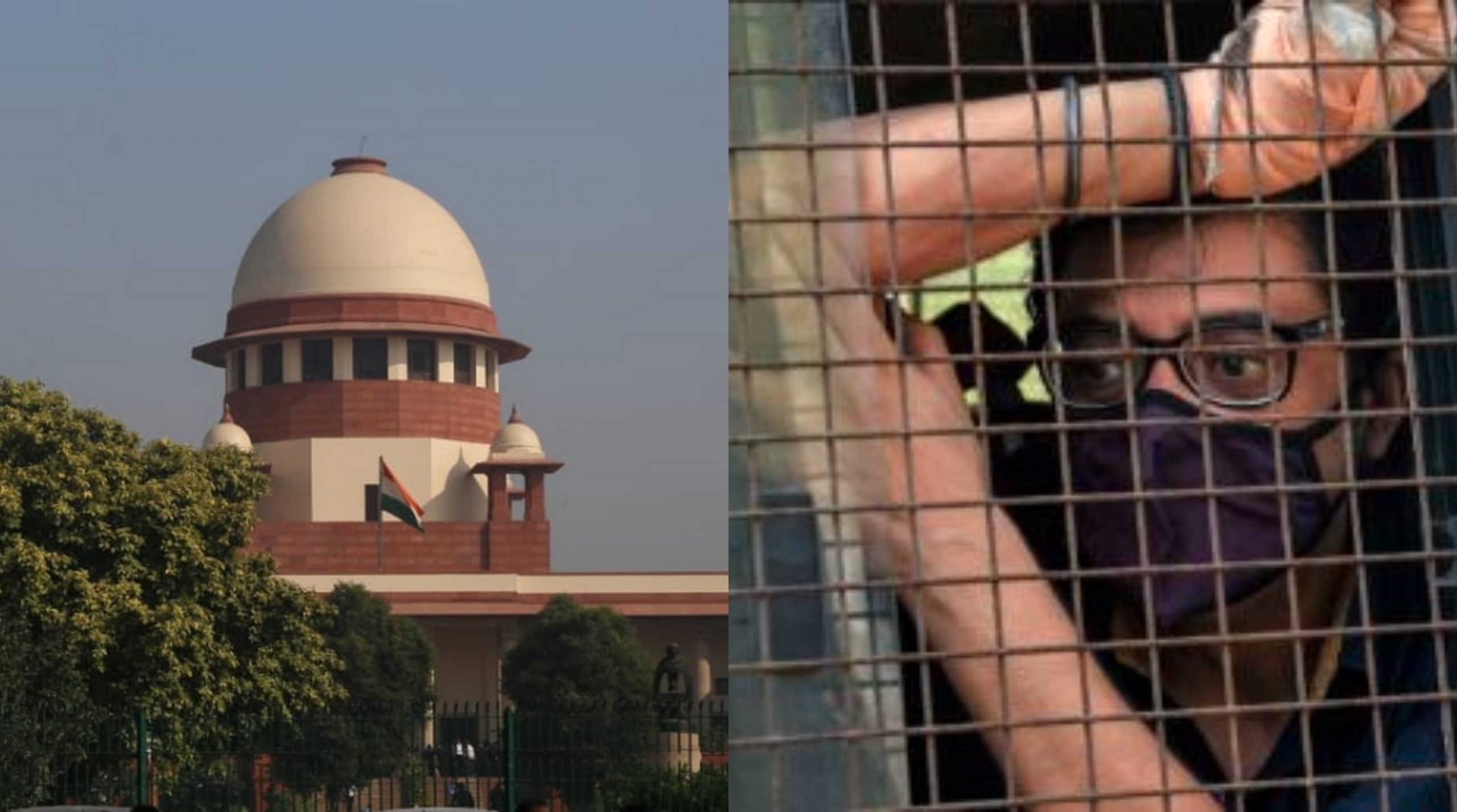 Writ of liberty runs through the fabric of the Constitution says SC, explaining reasons for Arnab Goswami’s bail; reiterates bail not jail should be the norm

The Leaflet·November 27, 2020
Home
Due Process
Democracy and Rule of Law

The Supreme Court Friday gave its reasons for granting interim bail to Republic TV Editor Arnab Goswami and two others in the case of alleged abetment of suicide.

A two-judge bench of Justices DY Chandrachud and Indira Banerjee held that the Bombay High Court did not consider whether prima facie the ingredients of an offence were made out in the FIR. The bench added that the High Court by failing to do so abdicated its constitutional duty and function as a protector of liberty.

If the High Court were to carry out a prima facie evaluation, it would have been impossible for it not to notice the disconnect between the FIR and the provisions of Section 306 of the IPC, the bench said.

Section 306 of the IPC reads as follows-

306. Abetment of suicide.—If any person commits suicide, whoever abets the commission of such suicide, shall be punished with imprisonment of either description for a term which may extend to ten years, and shall also be liable to fine.

The Court went on to state that the failure of the High Court to do so had led it to adopting a position where it left the petitioner to pursue his remedies for regular bail under Section 439 (Special powers of High Court or Court of Session regarding bail) of the IPC.

The High Court was clearly in error in failing to perform a duty which was entrusted to it while evaluating a petition under Section 482 (inherent power of the High Court) albeit, at the interim stage, the apex court said.

The High Court should not foreclose itself from the exercise of the power when a citizen has been arbitrarily deprived of their personal liberty in an excess of state power.

It directed that the interim protection which had been granted on November 11 would continue to remain in operation pending the disposal of the proceedings before the High Court and thereafter for a period of four weeks from the date of the judgment of the High Court.

(ii) Whether there exists a reasonable apprehension of the accused tampering with the witnesses or being a threat to the complainant or the witnesses;

(iv) The antecedents of and circumstances which are peculiar to the accused; (v) Whether prima facie the ingredients of the offence are made out, on the basis of the allegations as they stand, in the FIR; and

(vi) The significant interests of the public or the State and other similar considerations.

In this batch of cases, the Court held, a prima facie evaluation of the FIR did not establish the ingredients of the offence of abetment of suicide under Section 306 of the IPC.

“The appellants are residents of India and do not pose a flight risk during the investigation or the trial. There is no apprehension of tampering of evidence or witnesses. Taking these factors into consideration, the order dated 11 November 2020 envisaged the release of the appellants on bail”, the Court reasoned.

Human liberty and the role of Courts

The apex court also dedicated a chapter in the 55-page judgment on human liberty and the role of the court. Penning the judgment for the Court, Justice Chandrachud said it was the duty of courts across the spectrum – the district judiciary, the High Courts and the Supreme Court – to ensure that criminal law does not become a weapon for the selective harassment of citizens.

“Courts should be alive to both ends of the spectrum – the need to ensure the proper enforcement of criminal law on the one hand and the need, on the other, of ensuring that the law does not become a ruse for targeted harassment”, said Justice Chandrachud.

The misuse of the criminal law is a matter of which the High Court and the lower Courts in this country must be alive.

“Liberty survives by the vigilance of her citizens, on the cacophony of the media and in the dusty corridors of courts alive to the rule of (and not by) law. Yet, much too often, liberty is a casualty when one of these components is found wanting”, said Justice Chandrahcud added.

The bench emphasized that the courts must ensure that they continue to remain the first line of defense against the deprivation of the liberty of citizens.

“Deprivation of liberty even for a single day is one day too many. We must always be mindful of the deeper systemic implications of our decisions”, the Court said.

The Court also pointed to Justice Krishna Iyer’s pithy reminder that the basic rule of our criminal justice system is bail, not jail‘. The high courts and courts in the district judiciary of India must enforce this principle in practice, and not forego that duty, leaving the top court to intervene at all times.

The doors of this Court cannot be closed to a citizen who is able to establish prima facie that the instrumentality of the State is being weaponized for using the force of criminal law. Our courts must ensure that they continue to remain the first line of defense against the deprivation of the liberty of citizens. Deprivation of liberty even for a single day is one day too many

Justices Chandrachud and Indira Banerjee expressed the hope that courts will exhibit acute awareness of the need to expand the footprint of liberty and use their approach as a decision-making yardstick for future cases involving the grant of bail.

The Bombay High Court on November 9, refused to release Editor-in-Chief of Republic TV Arnab Goswami on interim bail in an abetment-of-suicide case registered against him in May 2018.

A division bench of Justices S S Shinde and M S Karnik said no case was made out for it to exercise its inherent power. The bench though granted liberty to Goswami to approach the Sessions Court with a bail application. The bail application, if filed, would be decided within 4 days, the bench added.

Goswami is accused of abetting the suicide of interior designer Anvay Naik and his mother Kumud Naik in May 2018. According to police officials, the duo died by suicide over the alleged non-payment of dues by Goswami’s television channel.

In April 2019, the Raigad police closed the case by filing a summary report which said that they did not find evidence against the accused named in the suicide note, including Goswami. However, in May this year, Anvay Naik’s daughter approached Maharashtra Home Minister Anil Deshmukh seeking a reopening of the case. Deshmukh had tweeted in May that he had ordered the CID to re-investigate the case.